3 Signs Black Friday Was a Bust

The black Friday spending numbers are finally out.

The result: The discount holiday’s experiencing a slow, dreary and miserable death.  The significant drop in the percentage of in-store purchases just don’t jive with the press coverage showing people climbing over one another for appliances.

As you can see in the Bloomberg chart on total retail below, online shopping for 2016 has taken over the traditional “in store” route of old.  No longer is Ralphie dreaming of a Red Ryder bb gun hanging in the department store, he now has his wish list assembled on Amazon… Merely a click away. 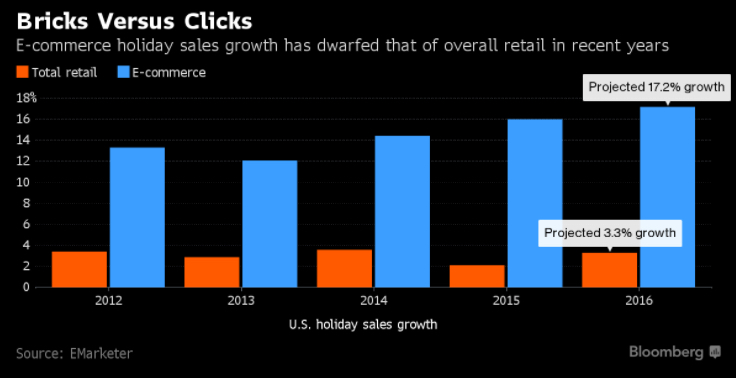 The gradual rise of e-commerce has shortened long lines, kept people away from impossible parking and reduced zombie walkers wearing off their post-Thanksgiving hangovers from waking up at 3AM.

Even with online shopping in consideration, the numbers are far worse than the previous year. If the consumer is recovering, it’s wasn’t evident on Black Friday. 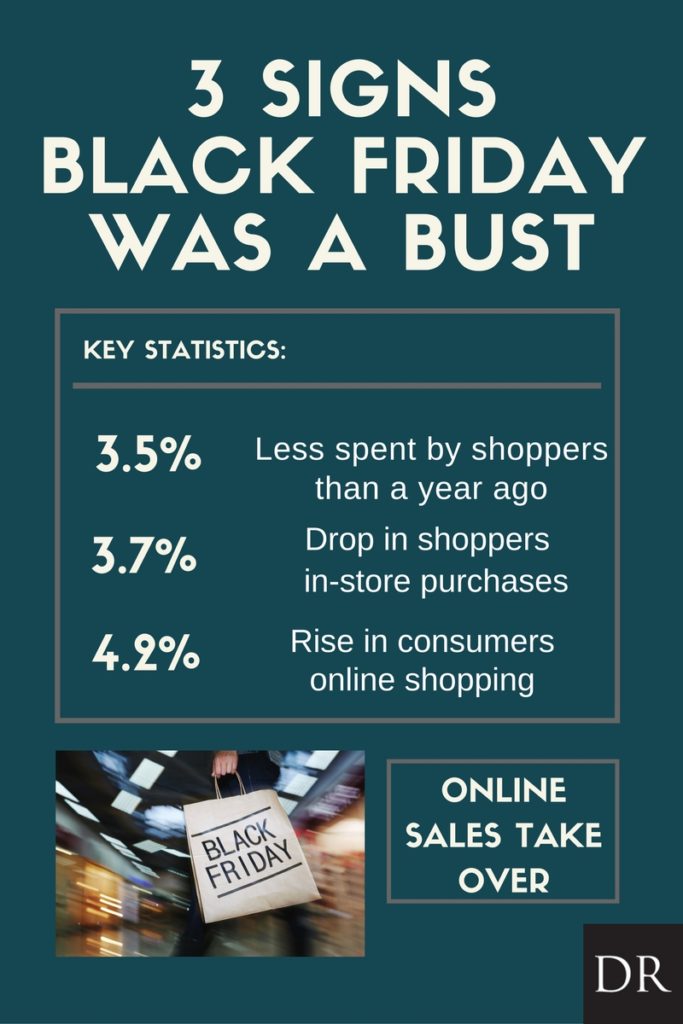 These numbers paint a picture of a changing landscape in consumer habits. They also give insights on the American economy.

Our own Jim Rickards notes on that while spending might just be more spread out with online shopping emerging as a new option, “This material [3.5%] year-over-year decline is still sobering news, coming as it does in the midst of a historic stock market rally.”

Markets, Black Friday and Your Money

While the stock market may be in a state of euphoria over Trump, the rise in stock market numbers will soon fade.  According to one writer at the Wall Street Journal, Donald Trump’s economic plan just won’t add up.  When it does take the hit, it will then catch up to what consumers and shoppers that would traditionally be up early the day after Thanksgiving already know.  Times are tough.

Gallup reported that U.S. economic confidence is the highest it has been since the epic fall of Lehman, flyover America remains skeptical.  With confidence building, the fall will be a detrimental one.  The private sector might be hard hit under a shock to confidence, but so will your wallet.

Jim Rickards remarks, “With the Fed poised to tighten monetary conditions with a December rate hike, and the likely promise of more rate hikes to come, it’s not clear that euphoria alone will sustain the stock rally. Investors need to be careful as reality slowly intrudes on the rosy scenarios the market is painting.”

So what do you do in the meantime between a lackluster holiday numbers, an impending Fed interest rate hike, and the drumbeat sounds toward economic fallout?

“Cash is a good asset to hold,” recommends Rickards, “while we’re waiting for more visibility on these post-election trends.”

“Stocks look overbought and bonds look oversold at these levels. Cash is a good asset to hold while we’re waiting for more visibility on these post-election trends.”

Until then hold tight.  But understanding that this was no normal black Friday, that this is no normal economy is key.