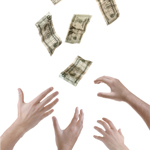 Creating and sustaining a nation of zombies is expensive.

Large sections of the US population have been turned into zombies. Retirees. Medicare dependents. Food stamp recipients. Disabled people. They are not necessarily bad people. They are not necessarily dishonest or lazy. But rather than add to wealth, they consume it. And when you have too many of them, your society consumes more wealth than it produces and you are on the road to The Downside.

But the feds are not only creating individual zombies, they are also creating corporate zombies. An obvious example: “green” energy. Without subsidies, loan guarantees, tax benefits and direct giveaways, the industry as we know it would not exist. Nor would the ethanol industry in the Midwest. Nor the security industry in the Northern Virginia suburbs of Washington, DC.

The financial industry too, as we know it, would not exist either. Much of it would have been swept away in the financial storm of 2008-09. That story is well-known, but not well understood. Most people believe the authorities acted heroically, saving the nation from a depression. But what the authorities really did was to take the public’s money and give it to cronies on Wall Street in order to prevent them from suffering the losses they deserved. The government transferred nearly $2 trillion in various forms from the public purse to the pockets of the financial industry. With that kind of backing, most of the old investment firms survived. The new ones that might have replaced them never saw the light of day.

Industries need to be sustained by the government when they cannot sustain themselves. This is practically the definition of “malinvestment” — putting capital and energy into investments that don’t pay off. When an industry is only profitable with government backing it means that the industry uses resources — labor, energy, raw materials — and turns them into finished products that are worth less than the inputs required to make them. The more of these zombie industries the government supports, the poorer the society becomes.

“Rentier” is a French word that has leaked into English. It doesn’t mean zombie literally, but it describes people who have found a way to exploit the system for their own benefit — people who have legal entitlements to income streams. In other words, “rentier” describes a class of folks who contribute absolutely nothing to national prosperity — zombies.

Before the French Revolution, favored groups were able to secure special privileges and monopolies giving them the right to income. For example, the people from whom we bought our first house in France had a monopoly on the importation of tobacco from the New World. I don’t know who granted this monopoly, but typically it was the monarchy. And typically, such monopolies were given away either to appease a potential adversary or simply to raise cash for the crown by selling off a stream of future income.

Any official document needed an official stamp. Naturally, the crown sold off the right to stamp documents. If you wanted to make a business deal, buy or sell land, or get married, you had to pay the person with the stamp.

Over time, the rentier class grew larger and harder to support. More and more of the kingdom’s energy went to support what was essentially a group of parasites who produced nothing. This is part of the explanation for the French Revolution. The system became so inefficient and was made so fragile by waste that a relatively minor setback — a couple years of bad harvests — caused widespread hunger and revolt.

By the close of 2012, there were zombies everywhere. Throw a cream pie from almost any street-corner and you were almost certain to hit one in the face. If the street-corner were in Washington, DC, you’d probably hit two or three of them.

A recent report in The Wall Street Journal confirmed that zombies don’t work very hard. The Bureau of Labor Statistics has been compiling detailed data on how people use their time. Researchers tracked how many hours people slept, ate, watched TV and worked. And guess what? They found that federal government employees put in 3.8 fewer 40-hour weeks than employees in the private sector. Here, the cost of zombification is clear: if the zombies were forced to work the same hours as people in the private sector, the government would save $130 billion a year.

Meanwhile, over in the pentagon, R. Jeffrey Smith had his eye on the zombies too:

Of the many facts that have come to light in the scandal involving former CIA director David H. Petraeus, among the most curious was that during his days as a four-star general, he was once escorted by 28 police motorcycles as he traveled from his Central Command headquarters in Tampa to socialite Jill Kelley’s mansion. Although most of his trips did not involve a presidential-size convoy, the scandal has prompted new scrutiny of the imperial trappings that come with a senior general’s lifestyle.

The commanders who lead the nation’s military services and those who oversee troops around the world enjoy an array of perquisites befitting a billionaire, including executive jets, palatial homes, drivers, security guards and aides to carry their bags, press their uniforms and track their schedules in 10-minute increments. Their food is prepared by gourmet chefs. If they want music with their dinner parties, their staff can summon a string quartet or a choir.

The elite regional commanders who preside over large swaths of the planet don’t have to settle for Gulfstream V jets. They each have a C-40, the military equivalent of a Boeing 737, some of which are configured with beds.

And then, even after they retire…the zombies keep feeding off the productive sector:

Updating a 2010 Boston Globe report that documented the practice, CREW found that over the last three years, 70 percent of the 108 three-and-four star generals and admirals who retired “took jobs with defense contractors or consultants.”

As Sen. Claire McCaskill, D-Mo., put it during a 2009 hearing on Obama’s nomination of former Raytheon executive William Lynn to become the deputy secretary of defense, “it’s an incestuous business, what’s going on in terms of the defense contractors and the Pentagon and the highest levels of our military.”

During the Presidential campaign, Mitt Romney mentioned that 47% of American households now receive some form of support from the government. In a better democracy, none of those people should vote. They all have a conflict of interest. They should admit that they find it difficult to separate their own personal interests from those of the nation and abstain from casting a ballot. Instead, they “vote their own pocketbooks” — usually coming down on the side of diverting more resources from the productive sector to their own personal consumption.

The zombies corrupt the system. The march to Stalingrad continues. And the Downside takes over.