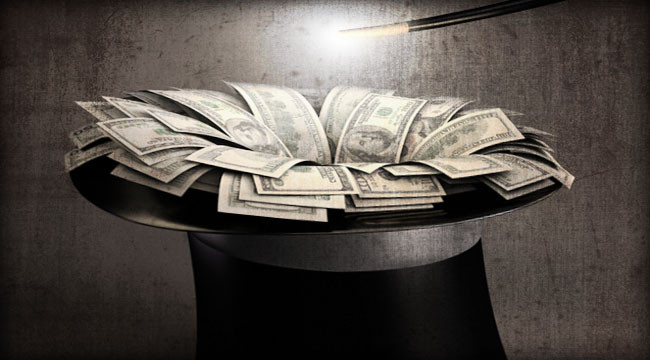 You Take the Risk, Billionaires Collect the Profits

The real estate “steal of the century” is moving into its final, most rapacious and decadent phase. Team Trump wants to hand over $5 trillion in assets to billionaires — assets for which you, dear taxpayer, are shouldering the risk.

Pour yourself a tall serving of your favorite beverage and sit back for the ultimate tale of “privatized profits and socialized risk.”

“In a dystopian America of the near future, millions of foreclosed homes sitting on the federal government’s books are flipped at fire-sale prices to hedge funds and private-equity firms with government connections.”

This was the earliest stage of a scheme hatched in Washington called “REO-to-rental.” The idea is that these big-bucks investors would buy the single-family homes at a deep discount and then manage them as rentals.

Think back to early 2012. Wouldn’t you have loved to buy the foreclosure property around the block and rent it out in hopes of generating the income you could no longer get from a CD or a money market fund in our brave new zero-interest-rate world?

Sorry, you didn’t qualify. These foreclosures were available only to investors able to drop at least $1 billion on a bulk transaction with Fannie Mae, Freddie Mac or the Federal Housing Administration.

Five years later, “big investors have spent at least $32 billion buying and fixing up homes,” says this morning’s Wall Street Journal, “and they own between 1% and 2% of all U.S. rental homes, analysts estimate.”

The biggest investor of all is Blackstone Group — which might let you collect a paltry cut of the rental income now.

It wouldn’t be the first. Less than a year after the feds rolled out REO-to-rental, Silver Bay Realty Trust went public under the ticker SBY. Others have followed, including American Homes 4 Rent (AMH) and Colony Starwood Homes (SFR).

Whatever income these companies pull in from their rentals, they don’t hand over much of it to their retail shareholders. SBY and SFR have yields of just under 3% — about the same as a 30-year Treasury bond. AMH has a yield of less than 1%.

So… Wall Street feasts off Fannie and Freddie… while mom and pop get crumbs.

At this point in our story, it’s worth recalling just how Fannie and Freddie operate.

As you might already know, Fannie and Freddie are GSEs, or “government-sponsored enterprises.” They provide insurance-like guarantees on $5 trillion in mortgages. They collect money upfront in exchange for a promise to pay on any credit losses.

Well, that’s the sugarcoated description. Here’s how our own David Stockman describes it: “They stamp what amounts to a government guarantee on trillions of dollars in mortgages and then collect a fee for doing nothing except putting taxpayers in harm’s way.”

Still, for decades, it was good business. Easy money. Then came the real estate bubble, followed by the Panic of 2008. Suddenly, taxpayers were on the hook for a $188 billion bailout. Fannie and Freddie booked huge losses from 2009–2011.

But with the recovery of the housing market — if you factor out inflation, housing prices are back to the mid-2006 peak — Fannie and Freddie’s revenues are way up and losses way down.

However… a few Wall Street sharks believe the profits really belong to them, even though you’re the one at risk. And they’ll stop at nothing to grab those profits.

Fannie and Freddie are still publicly traded companies, even after the nationalization. The government owns about 80% of the shares… while booking 100% of the profits.

The other 20% of the shares have been snapped up in recent years by hedge fund operatives like Bill Ackman. In part, it was a bet on a housing recovery… but it was mostly a bet that Congress would change the law and allow Ackman and Co. to collect the profits, instead of the Treasury.

When Congress didn’t act, Ackman and the others sued. Incredibly, they did so on Fifth Amendment grounds.

“This whole hedge fund gambit is a Wild West speculation on worthless paper and the presumed mendacity of the nation’s legislators,” says David Stockman, “yet these Wall Street larcenists have the nerve to call an attempted theft from the public a ‘taking’ of their own private property.”

Hours after he was named a week ago today, he was telling CNBC that Fannie and Freddie are one of his Top 10 priorities: “We will make sure that when they are restructured, they are absolutely safe and don’t get taken over again. But we’ve got to get them out of government control.”

Allow Mr. Stockman to once again translate: “That’s code for showering his hedge fund buddies with billions of windfall gains on the otherwise worthless stock of these two government housing finance zombies.

“These misbegotten operations can’t be ‘restructured’ and can’t be made ‘absolutely safe’ as spinoffs to the private sector. That’s because without some form of backstop from the U.S. Treasury, their whole business model would collapse.”

Note the choice of words by Mnuchin, the ex-Goldman Sachs man: “We’ve got to get them out of government control.” He said nothing about ending the taxpayer backstop.

Concludes Mr. Stockman: “We have been rooting all along for the Donald and his fulminations against the Wall Street/Washington ruling elites. But we have also insisted that he has no clue about how to actually ‘drain the swamp.’”

If that wasn’t clear before, Mnuchin’s priorities make it clear now.