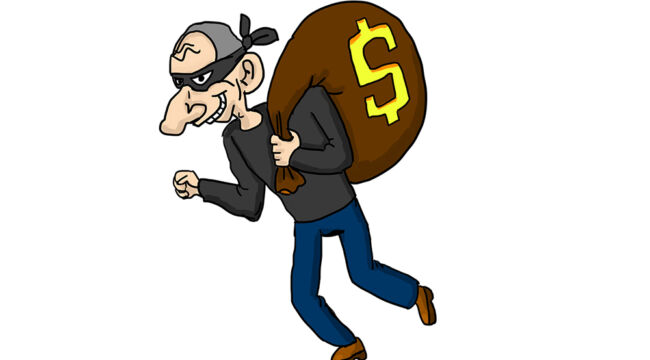 You Just Got Robbed!

Assume — for the moment — that yours is the standard American household. How much money did inflation steal from you in March?

The answer, the distressing answer, shortly. First the news…

Used auto prices declined 3.8% in March. Inflation would have run higher yet absent their tugging.

How did the stock market take this morning’s news? Initially well… then poorly.

Monthly core CPI — that is, subtracting food and energy — came in below consensus guessings.

A Dow Jones survey of economists had forecast a 0.5% March jump. The reported figure came in at 0.3%.

Mr. Market is a very hopeful fellow. Against billowing gray backdrops he strains his eyes… in quest of silver linings:

“Perhaps the below-consensus CPI print means the Federal Reserve won’t raise rates so aggressively. A less-aggressive Fed is good for me. I require low rates to keep me going.”

And so the Dow Jones was up and away 361 points this morning. Both the S&P and Nasdaq each glided higher on identical hopes.

Accordingly, the market presently gives 97% odds of a 50-basis-point May hike. Those same odds had previously read 92%.

Ms. Brainard added that partial balance sheet demolition could commence “as soon as May, which would lead to reductions in that balance sheet starting in June.”

The lady’s aim was true. And so stocks careened earthward this afternoon.

The Dow Jones lost 87 wing-clipped points by trading’s end. The S&P 500 ended the day down 15 points; the Nasdaq Composite down 40.

Let us sketch the inflationary scene in colors darker yet…

On rare occasions, we are buoyed by some scrap of positive news. Thus our spirit sings and our heart crowds with joy.

These are invariably moments of great concern. That is because they heave our internal settings into vast discombobulation.

To restore our natural equilibrium we turn to Mr. John Williams and his ShadowStats site. They restore — unfailingly — our disfaith in this world.

He gives the ice-cold facts, the hard facts.

His stated purpose is to expose and analyze “flaws in current U.S. government economic data and reporting.”

Thus this Williams fellow scatters the statistical fogs that government throws up to conceal true inflation.

If government number-manglers gauged inflation as they did in 1990, the true inflation rate approaches 14%.

And if they gauged inflation by 1980’s rules? Consumer inflation approaches a dollar-devouring 17%.

Perhaps Mr. Williams miscalculates the figures to some extent. We do not know if he gives a precisely true number.

Yet experience informs us he is nearer to bull’s-eye than the number-manglers within the United States government.

Inflation is a supremely skillful pickpocket. It is justly and aptly named the invisible thief.

It is a cat burglar on tiptoe.

Inflation is also the invisible tax. The administration may sob about inflation. Yet it cries the crocodile’s tears.

It is inwardly pleased with the haul it is taking in… silently and invisibly… beneath public awareness.

As Jim Rickards notes often in these pages, inflation is the only escape for a government as deeply indebted as ours. From a recent reckoning:

The debt is unmanageable without inflation. Inflation favors debtors because they get to pay back the debt with depreciating dollars. It’s easier to pay down debt because you’re paying back debt with dollars that are less valuable than when you originally borrowed them. So inflation eases the real value of debt.

Thus we might further label inflation the scoundrel’s tax. And what is government but a gang of scoundrels?

How Much Money Did Inflation Steal From You in March?

Let us return then to our opening question: How much money did inflation steal from you in March?

Again, the question assumes yours is the standard American household. If it is, what is the answer? How much money did inflation lift from your pocket last month?

The average U.S. household spent an extra $327 in March due to inflation… That’s up from roughly $297 per household in February, when the consumer price index jumped 7.9%.

Three hundred twenty-seven dollars! The average American wage earner collars $32 per hour of labor. Thus he toiled over 10 additional hours in March to acquire his staples — more than one entire workday.

And that $32 wage — we must inform you — fails to account for taxation.

Assume a man labors the standard eight hours. His $32 hourly wage yields him $256 when the whistle blows.

He must therefore labor even longer to keep steady with inflation.

Is this justice? The liver and lights within us say it is not justice. It is injustice.

This fellow is sore beset. He must jog faster and faster to merely stand still.

Yet what can he do? In his estimation, nothing at all.