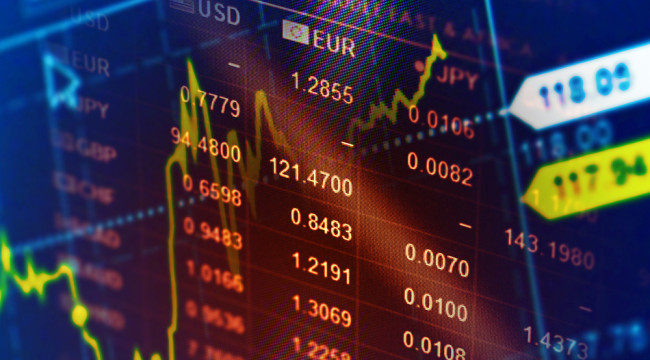 You Can Make Money in Up or Down Markets

These days I am so used to the concept of making money in up markets and down markets that I sometimes forget how foreign that very concept is for the average trader or investor.

It’s like a roller coaster, up and down, up and down, up, up, down, down — with no predictable pattern as to when up will happen or down will happen. The idea is to wait and let the market move in a direction — either way — and then follow it. That’s what allows trend followers to make money in any kind of market. Instead of trying to predict the future, they simply follow the trend. If the trend is up, they buy. If the trend is down, they sell. That’s it. And that’s how many trend followers made money in 2008.

Ben Stein famously said, “If you didn’t lose a lot of money during the Panic of 2008, you were probably doing something wrong.” I heard those words and wanted to scream. His view could not be any farther from the truth. People made fortunes in 2008 with solid money-making strategies. The winners were not doing anything wrong; they just happened to have had the vision to prepare for the unexpected. And when the big surprises unfolded they cleaned up.

Investors have been conditioned for decades to believe that they cannot beat the market. They’ve been told to buy index funds and mutual funds, listen to CNBC, and trust the government. I have news for you: That does not work! We have all seen one market after another crash for the last decade. But the powers that be keep telling us that the old investing ways are the only ways. Deep in our gut, we know it’s not true. Even if we don’t know who the winners are, there are winners in the market, especially in the middle of a crash.The world changed in October 2008. Stock markets crashed. Millions of people lost trillions of dollars when their long-held buy-and-hold strategies imploded. The Dow, Nasdaq, and S&P fell like stones, with the carnage carrying over to November 2008. Almost everyone has felt the ramifications: jobs lost, firms going under, and fear all around. Brokers, financial advisors, the financial media, and the government will tell you that no one made money during this time.

Everyone lost. But guess what? That’s a big fat lie. Wall Street is famous for corporate collapses and mutual fund and hedge fund blow-ups that transfer capital from winners to losers and back again. However, interestingly, the winners always seem to be missing from the after-the-fact analysis of the mainstream media. The press is fascinated with losers. Taking their lead from the press, the public also gets caught up in the dramatic narrative of the losers, oblivious to the real story: who are the winners and why?

The performance histories of trend followers during the 2008 market crash, 2000–2002 stock market bubble collapse, the 1998 Long-Term Capital Management crisis, the Asian contagion, the Barings Bank bust in 1995, and the German firm Metallgesellschaft’s collapse in 1993 all answer that all-important question “Who won?”

There were winners during October 2008, and they made fortunes ranging from 5% to 40% in that single month. Who were the winners? Trend followers. Many of my trend following colleagues from all over the country made a fortune in 2008, a time when most investors got creamed. Consider this:

Howard Seidler in Chicago, IL, made 36%. Bernard Drury in Princeton, NJ, made 75%. Gary Davis in San Diego, CA, made 34%.  David Druz in Haleiwa, HI, made 48%. Mark J. Walsh in Chicago, IL, made 50%. Tom Shanks in Chicago, IL, made 96%. With such great performances, it’s really shocking to me that not many people take advantage of this strategy. But how did they do it? First, let me state how they did not do it:

The market crash of 2008 offered fantastic data to see how trend following is so different from most of the investing world’s mindset. But the performance in 2008 wasn’t just a fluke. The truth is trend followers have been making a fortune for the past 200 years, regardless of market conditions.

Yvis Lemperiere, a PhD from Cambridge University, and his co-authors recently published a paper called “Two Centuries of Trend Following.” They back-tested this strategy all the way back to 1800 for stocks and commodities. And they found consistent extraordinary returns across different asset classes. They concluded: The effect is very stable, both across time and asset classes. It makes the existence of trends one of the most statistically significant anomalies in financial markets.

Brian Hurst and Yao Hua Ooi, of AQR Capital Management, and Lasse Pedersen, from New York University, recently co-wrote another paper on trend following. They wanted to test if this little-known strategy works in a wide range of economic conditions. So they looked at data going all the way back to 1903. And they compared the performance of trend following against the performance of a typical 60–40 portfolio (60% invested in stocks and 40% in bonds).

Specifically, they looked at trend following’s performance during the worst ten market crashes of the past 110 years. As you can see in the chart below, trend following experienced positive returns in nine out of ten of these stress periods and delivered significant positive returns during a number of these events. In fact, it outperformed a traditional portfolio in 100% of those stress events. Trend following has outperformed traditional portfolios in all past market crashes 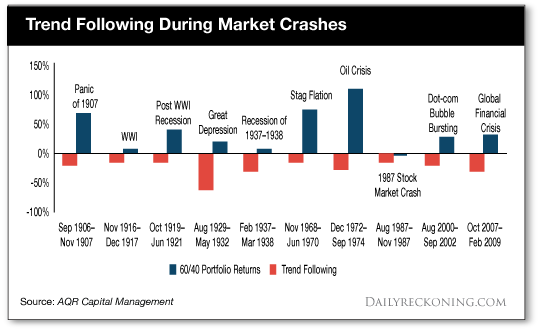 The intuition is that the majority of bear markets have historically occurred gradually over several months, rather than abruptly over a few days, which allows trend-followers an opportunity to position themselves short after the initial market decline and profit from continued market declines.

And here’s their final conclusion:

We find that trend-following has delivered strong positive returns each decade for more than a century. The performance has been remarkably consistent over an extensive time horizon that includes the Great Depression, multiple recessions and expansions, multiple wars, stagflation, the Global Financial Crisis, and periods of rising and falling interest rates.

Tobias Moskowitz, from the University of Chicago, was also intrigued by trend following. After all, most finance academics believe nobody can beat the market. So he decided to analyze whether anyone could beat the market simply by following the trend. Here’s what he concluded:

As you can see, you can make money in both up and down markets. But chances are you did not make money in 2008 because you were following the “buy and hold” strategy.

I like it to call it the “buy and hope” strategy because that’s a more accurate description. It’s a very simple strategy that has only two steps. First, you buy stocks. Second, you hope stocks will keep moving higher. That’s it. If stocks go up, you make money. If stocks go down, you lose. And if the market crashes, well . . . tough luck. You might just lose half of your retirement account in a matter of months, like what happened in 2008. Does that sound like a good strategy to you?

It isn’t. There’s a better way, and I believe I’ve found it. There’s no reason you can’t use it yourself to build your retirement dreams. But the first thing you’ll need to do is break one of Wall Street’s biggest lies. Click here now to see the rule you need to break.