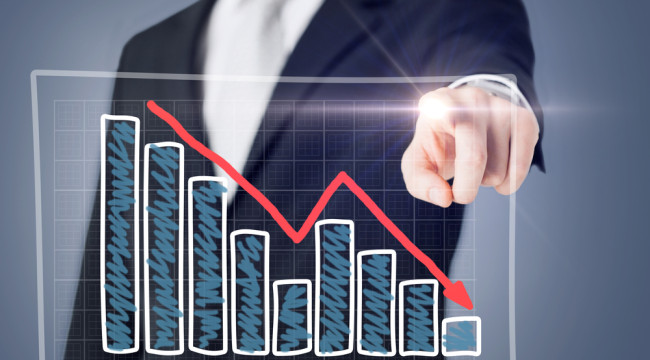 Worthless Advice from a Bank CEO

The CEO Tidjane Thiam tried to calm investors saying everything is fine. He even gave an unsolicited investment recommendation.

He said now it’s a great time to buy banks. And that it’s almost a risk-free investment.

According to him, the “world would have to come to an end” before investing in banks proved risky.

“There is no scenario where the banking sector blows up today,” added Mr. Thjam.

Should we listen to him and invest in bank stocks today?

Before we get to the answer, let’s take a look at how the banks are doing so far this year.

Since peaking last summer, the KBW bank index, which measures performance of major banks, is down about 23%.

Why such a weak performance?

Well, if you follow my work, you know trend followers don’t really worry about the “why.”

We just react to what’s happening in the market.

But I know you may be wondering what’s happening in the sector. Let me take a crack at it.

I’m About to Do Something Unusual

I rarely talk about economic factors because they simply don’t matter. The trend is the only thing I care about.

Now, let me say this again, just to be clear.

The yield curve analysis I’m about to make might make me look clever. But it will not put money in your pocket. Only the trend can do that.

But I suspect a flatter yield curve may be behind the recent weakness in banks.

In other words, the yield curve is becoming flatter.

This means the yield on 10-year bonds is dropping quicker than short-term yields.

Banks do great when they can pay almost nothing in CDs…and charge a much higher rate in mortgages and other loans.

But they don’t do so well when those long-term rates come down.

You can see that relationship between the KBW Bank index and the yield curve in the chart below. The gray area is the difference between the yield on 10-year and 2-year bonds.

As I said, right now it’s at 1.1%. Notice that the lower that difference, the lower bank stocks move. 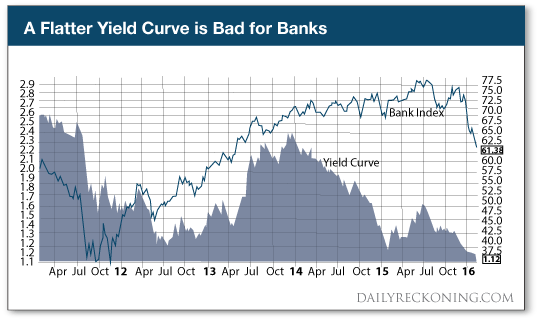 As a probable result, bank stocks aren’t doing so well.

But the CEO of Credit Suisse thinks you should buy bank stocks. Should you?

For a Bakery, It’s Always a Good Time to Buy Bread

First of all, that sure as hell sounds like a baker telling me now it’s a great time to buy bread.

But there’s a lot of analysts saying now it’s a good time to buy financials.

The magazine Barron’s for example recently published an article saying that shares of Citi, JPMorgan, BofA, and Wells Fargo could jump 20%

The article said: “The banking sector looks like one of the best bargains in the market. Given depressed sector valuations, it may be hard to go wrong with almost any major bank or investment banking stock.”

The thing is… my system, over the last month, has triggered a sell signal in ALL of these three stocks.

And that means stay the hell away from them.

It means the trend in financials is definitely down. And betting against the trend is one of the quickest ways to go broke.

"It is not clear when some of the current negative trends in financial markets and in the world economy may start to abate," he said.

Exactly, nobody knows when the trend will change.

Which is why the best way to deal with the volatility, and uncertainty, is to follow the trend.

And, according to my proprietary profit system, the trend for bank stocks turned lower in January 4th. That’s when my computer system triggered a sell signal, as you can see in the chart below.

My System Triggered Sell Signal on Bank Stocks in January 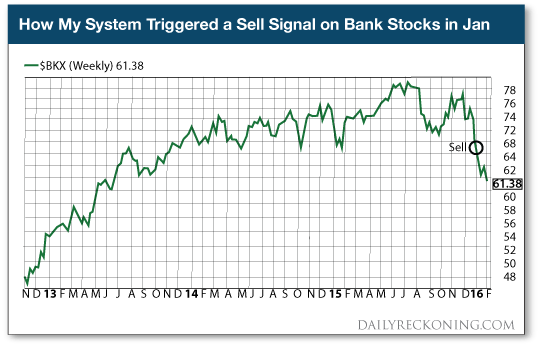 Now, can you profit from that trend?

Of course you can. There are plenty of ETFs out there that allows you to bet on downtrends.

The ETF ProShares Short Financials (SEF), for example, is designed to return the inverse of the daily performance of the Dow Jones U.S. Financials Index.

When the Dow Jones US Financials Index drops 1%, SEF goes up 1%. It’s a good way to bet against bank stocks.

In case you’re wondering… Yes, my system did trigger a buy signal on SEF recently.

Bottom line… avoid financials. They could be entering a major downtrend. Better to wait for the trend to turn up before jumping back in.