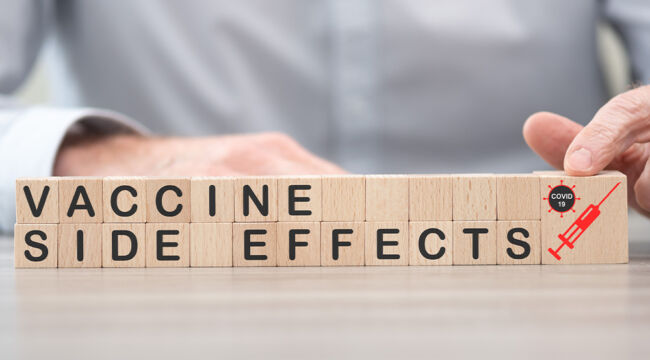 Why They’re Suppressing Vaccine Side Effects

Why do the health authorities refuse to acknowledge the possibility of severe vaccination side effects? Here is the likely answer:

As we maintained yesterday — in grim detail — the COVID-19 vaccines are likely not so safe as health authorities claim.

The numbers may trifle against the millions and millions of incident-free vaccinations. Most may be unaffected entirely. We do not claim otherwise.

Yet the casualty lists are far from negligible.

These vaccines have likely claimed more victims than all other vaccines over the past 30 years — combined.

Yet the authorities continue to stroke our ears with pretty jingles. They coo, they croon, that these vaccines are very nearly 100% safe.

It is the “Noble Lie,” argues Dr. Robert Malone.

Dr. Malone is an impeccably credentialed scientist. He helped pioneer the mRNA vaccine technology upon which the Pfizer and Moderna vaccines are based.

He is not an “anti-vaxxer.” Very much to the contrary. He has consecrated his career to vaccine development.

He believes in them.

His feet are planted firmly on the ground — in science.

Yet he harbors grave reservations about the safety of these particular vaccines.

His fears center on the “spike proteins” these vaccines yield. The vaccines employ messengerRNA.

This mRNA programs cells to switch production lines. The cellular equipment proceeds to roll these spike proteins off the assembly line.

The immune system then produces antibodies against them. This is the golden key to immunization… at least to our understanding.

Authorities claim these spike proteins are harmless and inert. Yet have another guess, argues Dr. Malone.

He believes they are active mischief makers that can play the devil with the biology:

Every drug or vaccine is toxic at some level in some percent of people, and there’s pretty clear evidence that the spike protein expressed from vaccines is causing toxicity in a small subset of patients. The question is, How big is that subset, and how broad and bad are those toxicities? The honest truth is, we don’t know. And furthermore, there’s a lot of signs that that information is being withheld from us.

The authorities further claim the vaccinated material remains chained to the injection site, to the deltoid muscle and local lymph nodes. There they remain for the duration of their sentence.

Yet is it true? The evidence runs the other way, argues Canadian vaccine researcher Dr. Byram Bridle.

This fellow is a viral immunologist and associate professor at University of Guelph, Ontario.

“We Made a Big Mistake”

We made a big mistake. We didn’t realize it until now. We thought the spike protein was a great target antigen, we never knew the spike protein itself was a toxin and was a pathogenic protein. So by vaccinating people we are inadvertently inoculating them with a toxin.

It’s the first time ever scientists have been privy to seeing where these messenger RNA [mRNA] vaccines go after vaccination. Is it a safe assumption that it stays in the shoulder muscle? The short answer is: absolutely not. It’s very disconcerting.

The vaccines we’re using get the cells in our bodies to manufacture that protein. If we can mount an immune response against that protein, in theory we could prevent this virus from infecting the body. That is the theory behind the vaccine.

However, when studying the severe COVID-19, […] heart problems, lots of problems with the cardiovascular system, bleeding and clotting, are all associated with COVID-19. In doing that research, what has been discovered by the scientific community, the spike protein on its own is almost entirely responsible for the damage to the cardiovascular system, if it gets into circulation.

Not all medical professionals are convinced…

“So far,” claim experts at the Meedan Digital Health Lab, “there is no scientific evidence available that suggests spike proteins created in our bodies from the COVID-19 vaccines are toxic or damaging to our organs.”

Just so. Yet we have questions: Why so many fatalities? Why so many grave side effects? What accounts for them? Why have these spike proteins been discovered in the distant organs?

We are no medical man. Yet we hazard these escaped convicts that run at large throughout the biology — these circulating spike proteins — explain the vaccines’ multiple side effects.

At least, that is, if the casualty lists are accurate to a reasonable degree.

As we reported yesterday:

65,216 of the adversely affected required emergency repairs. 40,873 were admitted to hospitals for less intense servicing.

12,808 endured permanent disability… Meantime, 11,940 of the vaccinated ended upon the dissecting table, dead.

Yet as we also reported yesterday:

Studies have concluded that merely 1 to 10% of all vaccine-related dying is reported to VAERS (Vaccine Adverse Event Reporting System).

One whistleblower — an expert in health data with access to government databases — recently filed a sworn legal statement under penalty of perjury.

Based upon her sleuthings, she claimed the true vaccine death toll approaches 50,000.

Against the 165 million vaccinated Americans, it is a slender, slender fraction. It is true.

Yet 11,900 to 50,000 Americans believed they were absorbing life-preserving inoculation against the virus.

The authorities assured them of it.

Yet these vaccines appear to especially injure the health of many.

These thousands of Americans did not expect the life-preserving vaccine to claim their own.

Yet, the health authorities dare not make mention of alarming potential risks. That is because they believe universal vaccination takes the royal road to “herd immunity.”

If they give square answers about the elevated risk, they believe it would frighten the horses.

Many will run away from vaccination — irrationally in the professional estimate. “The percentages are overwhelmingly with you,” they will say.

But they do not believe sufficient numbers of Americans will choose wisely. The Simple Simons will fixate only upon the dead, the amputated and the permanently wrecked.

Thus all mention of severe side effects and death must be strangled in the baby’s crib, choked and smothered — for the greatest good.

Again, to the authorities, universal vaccination holds out the divine grail of herd immunity. And they cannot permit a relatively small portion of unfortunates to throw them off the track.

I have colleagues in the government who are fully aware and were aware months before, for instance, the cardio-toxicity was disclosed, that the cardio-toxicity was an issue. What I’m hearing now, from multiple sources, is that individuals are purchasing access, for instance, to the Medicare/Medicaid database and — high net worth individuals — and are paying for bio-statisticians to independently evaluate those. And in some cases… because they’re so concerned about what’s going on. Now, what they’re finding is that the CDC is grossly underreporting these key adverse events [that are available] in data that the U.S. government produces, [data] that is readily available to the CDC. And my colleagues, senior colleagues at the FDA, have known that this was the case for months, and are very frustrated.

Small Sacrifices for the Greater Good

There are multiple examples where it appears that the CDC appears to be editing data in support of the “noble lie.” Remember, going back to that, the core thesis — it’s in the Federal Register — the core thesis is that any information that would cause vaccine hesitancy must be suppressed. That’s what’s going on. Let’s be clear about that. And they believe that it’s OK to do so because it’s in the best interests of the public. This is classic noble lie logic.

People… believe that they deserve to have access to all of these data, make their own choices, exercise their own free will, not be forced into decisions by the government about risks that they don’t fully understand. Yet the government still believes that it’s OK to treat us in this paternalistic manner.

Yet government agencies are leagued together with Big Tech and the media to defend the Noble Lie — to the last hill, to the last man:

What’s different now is that they have these enormously powerful mechanisms for controlling information they never had before. And that’s this intersection of New Media, Old Media, and Big Tech. That’s what’s going on here, and they never had that level of power in their tools before.

Yet does the Noble Lie contain an even greater lie? Could vaccines actually be worsening and accelerating the viral outbreak? Could the experts be wrong — 180 degrees wrong?

This possibility we investigate tomorrow…