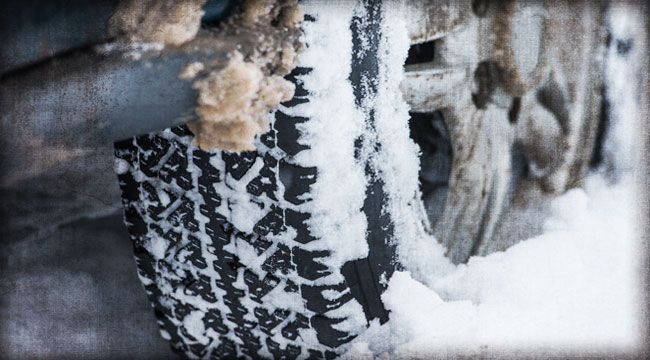 Why the U.S. is Stuck With a Subpar Economy

Making sense of economic fluctuations can be a daunting task. The economy comprises a gigantic set of interrelated assets, inputs, processes, transactions, and outputs, and its dimensions can be and have been measured in countless ways.

If we are to speak sensibly about the economy as a whole — recognizing that almost anything we say about the whole may not apply to various subsets of it — we must carefully choose the variables that hold the most promise for helping us to understand its broad movements.

The U.S. economy, in short, seems to be stuck in a decidedly subpar condition.

Economists do not agree, however, about why private investment varies disproportionately in the short and medium runs. Keynesians and Austrians, for example, disagree completely about the explanation of this disproportion and about its consequences.

My own view is broadly Austrian, which leads me to concentrate my analysis on net private investment as the key variable in explaining aggregate booms and busts. Of course, the Austrian view is not an “overinvestment” theory of the boom, but rather a “malinvestment” theory derived from a recognition that rapid expansion of artificial, bank-created credit pushes interest rates below market levels and thereby encourages an unsustainable volume of investment in longer-term investments.

So, when the bust ultimately occurs, as it must in these circumstances, the crucial requirement for a return to prosperity is a reconfiguration of the distorted structure of assets, employment, and outputs that the malinvestment-driven boom has created.

The Bureau of Economic Analysis prepares the National Income and Product Accounts, which consist of hundreds of separate but interrelated data series, including many that relate to saving and investment. Of these, I find it most instructive to emphasize one in particular: net domestic private business investment. Unfortunately, so far as I have been able to determine, this particular variable is reported only in current dollars, not in real (price-level-adjusted) dollars.

To deflate it, I have used the Producer Price Index for Final Goods and Capital Equipment (PPICPE), averaging the monthly values for June and July to approximate the index value for the entire year. This short-cut method should suffice for my purposes here because the rate of increase in the PPICPE has been quite low in recent years.

From the foregoing data, I have constructed the following index of real net domestic private business investment from 2005 to 2012, where the 2007 value = 100: 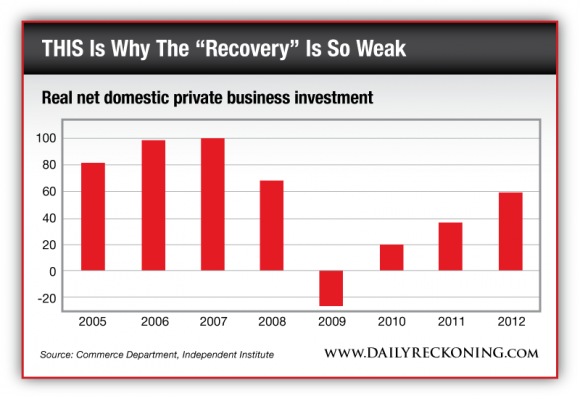 As the figures show, real net domestic private business investment reached its recent peak in 2007 (only slightly above the level for 2006), then plunged in 2008 and dropped even more precipitously in 2009. Although it recovered somewhat during the past three years, it remains extremely depressed relative to its previous peak.

Five years after its bust and partial recovery, real net private business investment, in 2012, remained 41 percent below its previous peak. The weakness of this investment recovery — a greater weakness than in previous postwar recoveries and reminiscent of the investment malaise of the post-1933 years of the Great Depression — surely plays a key role in explaining why output recovery has been so slow and employment recovery even slower in recent years.

One might concede this weakness in the recovery of net private business investment, yet argue that nevertheless a recovery has been occurring, and it is only a matter of time before full recovery is attained and new heights attained. Quarterly data for recent years, however, cast doubt on such confidence. For example, after advancing smartly in the second and third quarters of 2010, net private business investment fell during the following two quarters before resuming its advance in the second quarter of 2011.

In 2012 it fluctuated around a slightly higher level but finished lower in the fourth quarter than it had been in any of the preceding four quarters. Such slow, erratic recovery does not inspire confidence that we will see continued investment recovery in 2013, much less a truly robust recovery.

Even if the recovery of net private business investment should continue, however, it is now at such a relatively low level that two years or more will be required to bring it back to the level it attained in 2006 and 2007. If that course should be followed, we will then stand at a level equal only to the level attained nine years earlier. Such performance still would not signify a full recovery, however, because in a normal, growing economy, net business investment also should grow.

The U.S. economy, in short, seems to be stuck in a decidedly subpar condition. Private investors are not making the volume of investments required to propel living standards upward at the same rate at which the economy achieved such improvements historically for almost two centuries. Moreover, this reluctance to invest prevails despite the enormous cash holdings that many nonfinancial corporations now possess.

The current situation is not simply an artifact of wounded banks’ reluctance to make new loans, because many businesses are in a position to invest in long-term projects by using low-cost internal financing, but they are not doing so. Something else must be invoked to account for the bloodlessness of investors and entrepreneurs during recent years.

I have repeatedly suggested that regime uncertainty deserves serious consideration in our attempts to understand the economy’s present sluggishness. Nothing in the foregoing survey of real net private domestic business investment leads me to abandon this view of the matter at this time.

Robert Higgs
for The Daily Reckoning

Ed. Note: The subpar condition of the U.S. economy could continue for some time. But while it wallows in its own mediocrity, you can do something to actively change your fortune for the better. Sign up for the FREE Daily Reckoning email edition to get started.