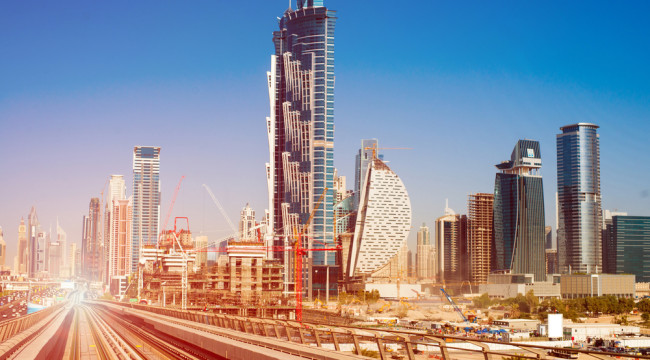 Why the Middle East is About to Blow Sky High

Oil surged above $50 a barrel in New York for the first time since July on speculation that demand is picking up.

The US Federal Reserve released the minutes from its September meeting overnight. It made mention of the oil price 14 times. Low oil prices, it says, will prevent any inflationary pressures building. Along with a stronger dollar and concern about China, it provided another excuse to push back on an interest rate rise.

Last Friday, the market realised the Fed wasn’t going to raise rates anytime soon. Since then, the price of West Texas crude oil has soared nearly 10%.

Bloomberg says it’s on ‘speculation that demand is picking up’. That’s rubbish. It’s on the realisation that easy money will persist for longer than expected.

But the recent rally doesn’t change much. The overall trend in the oil price is still down. As you can see in the chart below, the oil price plunged from over US$105 a barrel in mid-2014 to around US$45 in early 2015.

Six months later it recovered to just over US$60, before rolling over and making a lower low around US$38 in August this year. As you can see by the moving averages, the trend is still down. This could be the bottom and the start of a new upward trend, but plenty of people bought in earlier this year thinking the same thing.

Buying against the prevailing trend is a risky strategy. I’d rather wait and buy at higher levels, with less risk. For example, if the price continues to advance and breaks through the recent highs around US$60, I’d feel more confident that the trend had changed.

Until that happens though, I’ll stick with the downtrend and suggest this is just another bear market rally.

Oil prices are fascinating not only from an economic perspective. It’s the geo-political angle that makes oil a really interesting, if tragic, commodity. This is where the energy story becomes really complex. And Saudi Arabia is at the heart of the complexity.

A recent Foreign Policy article asked if it was ‘time for the United States to start worrying about a Saudi collapse?’

As if there weren’t already enough problems to worry about in the Middle East, Saudi Arabia might be headed for trouble. From plummeting oil prices to foreign-policy missteps to growing tensions with Iran, a confluence of recent events is mounting to pose some serious challenges for the Saudi regime. If not properly managed, these events could eventually coalesce into a perfect storm that significantly increases the risk of instability within the kingdom, with untold consequences for global oil markets and security in the Middle East.

Saudi Arabia is the US’s main ally in the Middle East. It has been ever since the discovery of the world’s largest oil deposits in the mid-20th Century. Never mind that the Saudi regime is a brutal and thuggish autocracy hiding behind a hard-core form of Islam. The US only preaches morality, it certainly doesn’t practice it.

The Saudi ‘Royals’ have held onto power by handing out money to its citizens. This was an easy strategy to maintain when oil prices were high. In fact, up until very recently, Saudi Arabia produced so much cheap oil that it could give money away and still run a surplus.

These accumulated surpluses saw it build a foreign exchange war chest of around US$750 million, mostly invested in US treasuries.

But with the oil price dive, this dynamic is over. The International Monetary Fund says Saudi needs an oil price of at least US$90 a barrel to balance its budget. The oil price is obviously a long way from this break-even level. The Foreign Policy article says the Saudi budget deficit is approaching 20%, or US$100 billion.

As a result, the Saudi’s must sell their reserves to fund spending. Over the past six months, it liquidated $70 billion in reserves.

In addition to spraying cash onto its restless and fractured citizenry, the Saudi’s must now confront a rising long term adversary in the shape of Iran. The two nations are fighting a proxy war in Yemen and are on opposing sides in the much larger Syrian conflict.

Iran’s newfound strength lies in its vast gas reserves, emanating from the massive South Pars gas field. A few years ago, there was a proposal to build a pipeline from the field, through Iraq and Syria, and then onto the end market of Europe. From Wikipedia:

Russia, through its state owned oil company Gazprom, was to have a major hand in this project, including construction and distribution of the gas onto Europe.

I don’t know where the project stands these days, but with Syria at the epicentre of the Middle East’s latest war, there’s a fair chance that it’s on hold.

The point is that this gas pipeline would empower Iran and Syria economically and weaken Saudi Arabia. This was not something Saudi Arabia and its allies wanted to see happen.

But even before this, Wikileaks files show that the US and its allies have had plans to overthrow the Syrian government for years. No doubt this came at the behest of the Israelis who are concerned over the Lebanon-based Hezzbollah group, who are allies of Syria’s Assad-led government.

But like everything else, unintended consequences have taken over events. For example, US funded ‘rebel’ groups in Syria have morphed into ISIS, which is now seen as a bigger threat than Assad himself.

The US now realises that an overthrow in Syria opens the door for an even more extremist regime.

This in turn will place Saudi Arabia under enormous pressure. The Saudi regime is not a popular one. Its hold on power comes through a mixture of carrot and stick policies. But it cannot maintain itself in a low oil price environment. There will be challengers…and you can bet that Iran will support these challengers.

It may not be too long before the focus on the Middle East moves from Syria to Saudi Arabia. Ironically, that could send the oil price much higher as uncertainty of supply takes precedence.

Who knows, that may be the reason behind the recent price spike.

Whatever. You reap what you sow. And 60-odd years of US energy politics in the Middle East is now bringing in a meagre harvest.

This just adds another layer of complexity to the Fed’s interest rates decisions. I wonder if they even realise it?