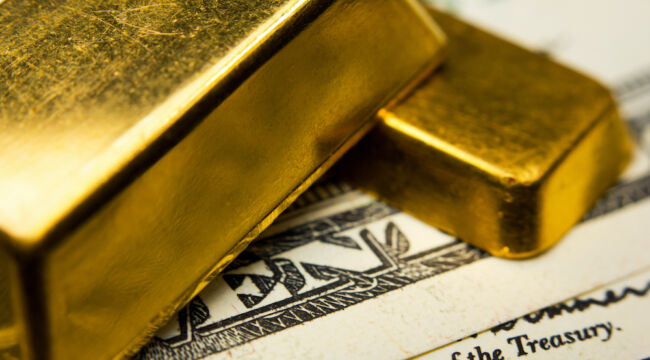 Why Martians Are Wrong About Gold

A martian — Warren Buffett once razzed — would marvel that earthlings dig gold from the ground… only to rebury it in vaults.

That is, the business is idiotic… pointless… and wasteful.

At first blush, our space man is justly puzzled. Why would humans shovel up hunks of metal — only to lock them away, idle?

Yet the martian — and the Nebraskan — jump past a fundamental truth of human nature.

As one insightful fellow (whose identity we cannot recall) has noted…

Men act with purpose. They do not squander their time or resources on pointless, juiceless pursuits.

Why would they expend vast resources to haul up gold… and risk their lives deep in dangerous mines to grab it… if they lacked compelling reasons?

We note that Mr. Buffett has recently purchased 21 million shares of Barrick Gold. Has this man forgotten his martian?

And so we arrive at this question: Why do men still toil extravagantly to wrest gold metal from stingy earth?

The Gold Standard of Money

Perhaps men continue digging up gold because thousands of years of history demonstrate that gold is worth digging up.

Gold is perhaps the ideal money, money par excellence — if you will forgive the expression, the gold standard of money.

Money must be rare. Rocks cannot be money — for example. Nor can dirt.

Yet there must be enough money to “go around.”

Gold is rare. But there is enough to go around. Hence it meets money’s strict conditions.

Gold is also durable. Gold mined thousands of years ago lives yet, fresh as a sprig, no wrinkles, no sags.

And unlike gems or diamonds, gold is divisible. It can be fashioned into bars or coins as needed.

Meantime, money must be a store of value. And gold maintains its value across centuries, across millenia.

Explains author Edward Griffin in The Creature from Jekyll Island:

At the Savoy Hotel in London, one gold sovereign will still buy dinner for three, exactly as it did in 1913. And, in ancient Rome, the cost of a finely made toga, belt, and pair of sandals was one ounce of gold. That is almost exactly the same cost today, two-thousand years later, for a hand-crafted suit, belt, and a pair of dress shoes at Barneys in New York. There are no central banks or other human institutions which could even come close to providing that kind of price stability.

Can paper money approach this rock-steady stability? Consider the dollar of the United States…

This debased currency has shed some 97% of its value since the Federal Reserve’s 1913 demon birth.

The greatest plummets came after 1971 — when Old Nixon severed the dollar’s last chain link to gold.

Do you value freedom? Then perhaps you should value gold. For gold is the money of freedom itself.

It is “sound money.” And sound money equals sound government.

We stand in defense of gold because it is sound money. Sound money is honest money.

And anything honest in this world is worth a defense. So little honesty… evidently… remains.

Natural money sets the mind to the future.

Before the 20th century, explains Hülsmann, debt was a cultural taboo… a scarlet “D” emblazoned upon the bosom.

Credit for households was virtually unknown, he says. And only the poorest households resorted to debt-financed consumption.

Ah, but then the 20th century came along with its wars… its world-improvers… and its cranks.

Gold was in their way. That is because gold resists social uplift.

“Gold Has the Public Spirit of a Cat”

Gold moves at its own leisurely pace. The greater good is beyond its care. It lacks all human compassion.

Gold has the public spirit of a cat.

And it turns from the sound of trumpets. “You go over there,” gold says. “I’ll stay here.”

The trouble with gold is that it turns its back on world improvers, empire builders and do-gooders. The nice thing about gold is that it is so unresponsive. It neither laughs nor applauds.

That is precisely why it could not last…

This money is ideal for public service.

It is civic-minded. It has a heart. It follows orders.

Whatever war, whatever boondoggle, whatever swindle it is ordered to get behind… it will get behind.

Fiat money willingly sacrifices its value for the greater good.

But this same debt-based money has not necessarily bred virtue. Hülsmann argues it has bred vice.

Hülsmann says it all encouraged a short-term outlook. The slow grind of saving yielded to the lure of the fast buck:

Fiat-money systems tend to make people insatiable in their quest for ever higher monetary returns on their investments… In a fiat money society you are more likely to increase your returns by remaining in debt and continuing to chase monetary revenue indefinitely by leveraging more and more funds.

You can imagine, then, how this inflation and debt-based system, over time, will begin to change the culture of a society and its behavior.

The debt-soaked society loses something of the human face perhaps. A point to ponder of an August afternoon…

We do not argue of course that a restoration of sound money would turn every heart to gold… or cure all our ailments.

But it appears this Hülsmann has hooked onto something.

Perhaps our paper money system has not only debased our economy and our politics… but our culture.

And perhaps our social money has made us less social…