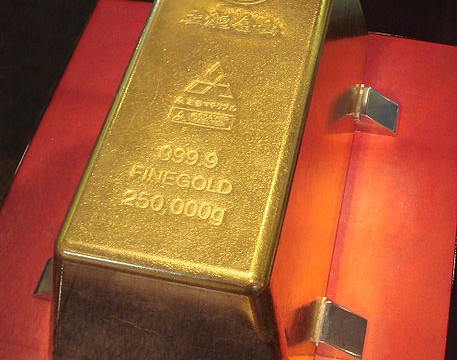 Why It's Not Time to Dance on Gold's Grave

After so many years of mumbly-dumbly gobbledygook and credit-pumping folderol (much of the blame for the credit crisis of 2008 can be sent to his inbox), we had forgotten about Greenspan’s earlier oeuvre.

Yes… before he became a public servant he might have passed for an honest man.

And his 1966 essay “Gold and Economic Freedom” is a classic. It helps explain how this credit bubble finally ends.

(Thanks to Pater Tenebrarum at David Stockman’s Contra Corner for reminding us.)

We are sitting at a sidewalk café in Paris. It is August. Families have decamped for the country. So it is quiet in this part of the city (the 16th arrondissement).

At this hour of the morning, there would normally be children going to school with satchels on their backs. The streets would be clogged with commuters. And the cafés would be crowded with all manner of people.

But the children are gone. Along with their parents. All that is left are a few fathers wondering how to get into trouble with their families gone, along with some old people, tourists, and mental defectives, dragging behind them their worldly goods in rolling caddies.

We are not sure which category we fit into.

At one table sits a pair of elderly women enjoying a morning coffee. At another are a man and a woman. Both attractive. Fortysomething. They are talking about real estate. Probably planning an affair.

At another table is a man of our age. He drinks his coffee. He might otherwise read the paper, but the news kiosk is closed for the summer. There are no papers to be had – not in this neighborhood. So he just stares out into the street, looking at nothing in particular.

Two workmen – their clothes spattered with white splotches – sit at another table. They are rough-looking sorts in T-shirts taking a morning coffee break.

Buses go by. A few cars. Passersby, none moving very ambitiously. It’s going to be a warm summer day.

The Dow was off a little bit on Friday. Shanghai stocks were off too. And oil.

But gold rose $7.40 an ounce in New York trading. So let’s return to gold.

Poverty is better than wealth in one crucial way: The poor are still under the illusion that money can make them happy.

People with money already know better. But they are reluctant to say anything for fear that the admiration they get for being wealthy would turn to contempt.

“You mean you’ve got all that moolah and you’re no happier than me?”

We bring this up because it is at the heart of government’s scam – the notion that it can make poor people happier.

In the simplest form, government says to the masses: Hey, we’ll take away the rich guys’ money and give it to you.

This has two major benefits (from an electoral point of view). First, and most obvious, it offers money for votes. Second, it offers something more important: status.

After you have food, shelter, clothing, and a few necessities, everything else is status, vanity, and power. Extra money helps us feel good about ourselves… and attract mates. It’s not just the money that matters. It’s your relative position in society.

From this point of view, it does as much good to take away a rich person’s money as it does to give money to a poor person. Either way, the gap closes.

Never, since the beginning of time up to 2015, has government ever added to wealth. It has no way to do so. And no intention of doing so. All it can do is to increase the power, wealth, or status of some people – at others’ expense.

That is a perfectly satisfactory outcome for most people, at least in the short term.

But the more this tool is used – the more some people’s power, status, and wealth is taken away – the more the wealth of all of them declines.

The trouble with socialism, as Maggie Thatcher remarked, is that you run out of other people’s money.

You run out because there is only so much wealth available… and because the redistribution of that wealth distorts the signals and incentives needed to create new wealth.

This means that society gets poorer relative to other societies that are not stealing from one group to give to another. After a while, the difference becomes a problem.

The meddlers see that they are falling behind and change their policies to try to get back in the race. (This is more or less what happened in Britain and China in the 1970s and the Soviet Union in the 1980s.) Or the poorer society is conquered by the richer one (which has more money to spend on weapons).

There is one other wrinkle worth mentioning…

Although it is true that “leveling” may have a pleasing aspect to the masses (bringing the rich down so there is less difference between the two groups)… it is also true that leveling is just what powerful groups do not want to happen.

Even when the elite go after “the rich” with taxes, confiscations, and levies, they tend to look out for themselves in other ways.

One study found that there was more difference between the way Communist Party members and the masses lived in the Soviet Union than there was between the rich and poor in Reagan’s America.

All of this brings us to here and now… and to gold.

Traditionally, gold is a form of money.

Money has no intrinsic value. It is the economy that gives money its value. The more an economy can produce the more each unit of money is worth. It doesn’t matter whether it is gold, paper, or seashells.

But just as the common man is deceived by money (he thinks more of it will make him happier), so are policymakers.

Their belief is a little more sophisticated. They know it is the economy, not money, that creates wealth. But they believe that adding money (and more demand) will make the economy function better… and make people wealthier.

This new form of money takes the scam to a new level. We have been trying to understand (and explain) how the system works and why it is doomed to failure.

But Alan Greenspan – bless his corrupted little heart – was on the case even before the credit bubble began:

Under a gold standard, the amount of credit an economy can support is determined by the economy’s tangible assets, since every credit instrument is ultimately a claim on some tangible asset.

But government bonds are not backed by tangible wealth, only by the government’s promise to pay out of future tax revenues, and cannot easily be absorbed by the financial markets.

A large volume of new government bonds can be sold to the public only at progressively higher interest rates. Thus, government deficit spending under a gold standard is severely limited.

The abandonment of the gold standard made it possible for the welfare statists to use the banking system as a means to an unlimited expansion of credit.