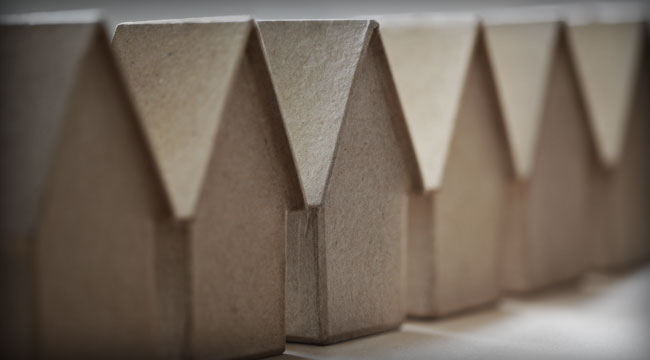 Why Housing Has Stalled - And Why Everything Else Will Follow

It’s not easy being a mainstream economist. You spend your life building models that become your professional identity. And when those models fail to describe and predict reality, you’re left wondering about the meaning of it all.

The latest case in point is US housing. Keynesian economic models say that if you lower mortgage rates you get more houses bought, sold and built. A nice, simple piece of cause and effect. But today’s mortgage rates are at levels that would have incited a buying frenzy a generation ago, employment is rising — and home sales, home building and mortgage originations are all flat-lining.

Zero Hedge and Automatic Earth recently posted good discussions of the current state of the housing market. Both articles conclude that housing is weak and getting weaker. But the real question is what this means for the rest of the economy. Is housing a discrete sector dealing with its own supply/demand issues, or is it a sign of things to come for consumer spending, government tax revenues, and business investment?

The argument for the latter scenario is based on the idea that newly-created currency pouring into the financial system pumps up asset prices, which convinces people that they’re rich enough to indulge in new cars, new clothes and nice vacations — and more stocks, bonds and houses.

But this “wealth effect” only works when the amount of debt in the system is low enough for new paper profits to change behavior. If people already carry too much debt, then they don’t feel comfortable borrowing even at historically low interest rates, and inflated asset prices become harder and harder to support. Either they stall or start moving lower, which shifts the wealth effect into reverse and sucks the air out of the economy.

The reason that so many economists didn’t see housing rolling over and don’t think it will affect the rest of the system in any event is that most Keynesian models don’t pay attention to society’s balance sheet. A given amount of new debt is supposed to increase “aggregate demand” by the same amount whether the government and consumers are debt-free or buried under a mountain of obligations taken on in years past. That’s a false assumption of course. Liabilities matter, and the fact that debt levels, especially student loans, are hitting records probably explains why housing isn’t behaving according to script.

The other fuel for a wealth effect-driven boom is the stock market. Here again, a nice pop has coincided with a big jump in debt, in this case margin debt, which investors incur when they borrow against stocks to buy more stocks. Late last year margin debt hit a new record and since then has gone even higher. Now it’s at levels that, based on history, imply less bang for each new borrowed dollar. Going forward it will be harder for investors to generate big returns by borrowing money and buying more equities. Taking profits will begin to seem more and more prudent, until sellers swamp buyers and the markets correct. 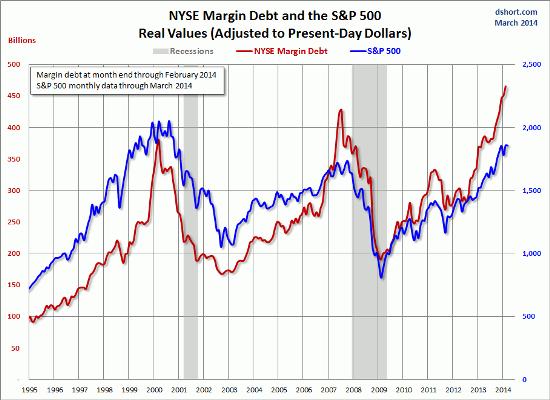 Assuming that equities plateau or start falling, what does that do mean for government’s strategy of using asset bubbles to pump up the consumer economy? Probably it derails it. The question is when.

John Hussman recently gave a great explanation of why pretty much every stock market valuation measure is now flashing either yellow or red. He notes that periods of extreme overvaluation like today are good indicators of low average stock market returns over the next decade, but not necessarily great trading signals. Stocks might get more overvalued before they stop. But that would raise the risk of a crash, which would have an even more serious impact on investor psyches. So either way, this year or next, the wealth effect will become the poverty effect, and asset owners will become asset sellers.

Lee Adler examines the raw data from Wall Street and the latest surveys to show you why the dogs are chasing their “tales.” Here’s the full scoop and what you should be paying attention to…