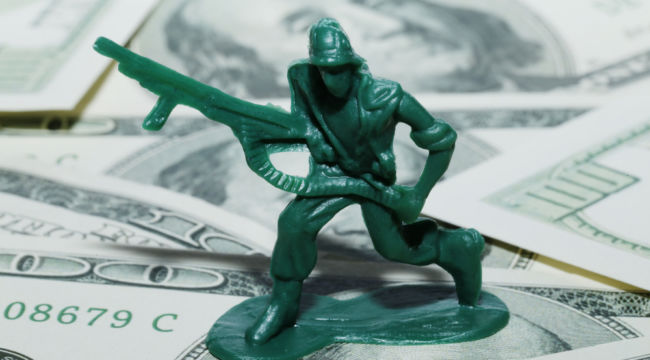 Why Elites Are Winning the War on Cash

Of course, these efforts are always portrayed in the most favorable light. Private parties talk about convenience and lower costs. Governments talk about putting pressure on tax cheats, terrorists and criminals.

Governments always use money laundering, drug dealing and terrorism as an excuse to keep tabs on honest citizens and deprive them of the ability to use money alternatives such as physical cash, gold and these days, cryptocurrencies.

But the so-called “cashless society” is just a Trojan horse for a system in which all financial wealth is electronic and represented digitally in the records of a small number of megabanks and asset managers.

Once that is achieved, it will be easy for state power to seize and freeze the wealth, or subject it to constant surveillance, taxation and other forms of digital confiscation.

That’s what they won’t tell you.

The second thrust is to eliminate large-denomination banknotes. The U.S. got rid of its $500 note in 1969, and the $100 note has lost maybe 90% of its purchasing power since then. With a little more inflation, the $100 bill will be reduced to chump change.

The European Central Bank has already discontinued the production of new 500 euro notes. Existing 500 euro notes will still be legal tender, but new ones have not been produced.

The real burden of the war on cash falls on honest citizens who are made vulnerable to wealth confiscation through negative interest rates, loss of privacy, account freezes and limits on cash withdrawals or transfers.

The whole idea of the war on cash is to force savers into digital bank accounts so their money can be taken from them in the form of negative interest rates. An easy solution to this is to go to physical cash. And that’s why they want to close off that escape route.

The good news is that cash is still a dominant form of payment in many countries including the U.S. The problem is that as digital payments grow and the use of cash diminishes, a “tipping point” is reached where suddenly it makes no sense to continue using cash because of the expense and logistics involved.

Once cash usage shrinks to a certain point, economies of scale are lost and usage can go to zero almost overnight. Remember how music CDs disappeared suddenly once MP3 and streaming formats became popular?

That’s how fast cash can disappear.

Once the war on cash gains that kind of momentum, it will be practically impossible to stop. That’s why I’m always saying that savers and those with a long-term view should get physical gold now while prices are still attractive and while they still can.

Given these potential outcomes, one might expect that citizens would push back against the war on cash. But in some places, the opposite seems to be happening.

As an example of how a fringe idea can begin to gain wider acceptance, look at microchipping, where people are injected with a small microchips beneath their skin. Microchipping has been associated with an Orwellian nightmare in which Big Brother constantly monitors your every move.

But over 4,000 Swedes have already happily volunteered to have it done.

In addition to other personal information, these chips can contain account information that negates the need to carry cash or credit cards to pay for goods. Just a swipe of the hand and voila, you’re done. It’s all happened fairly quickly. Just a few years ago, the very idea of it would have sent chills down the spines of most people.

By the way, Sweden is well on its way to going cashless, with cash and coins now constituting just 1% of its economy. So you can expect the trend to continue.

How long before it spreads to many other advanced economies?

One survey revealed that more than a third of Americans and Europeans would have no problem at all giving up cash and going completely digital.

Specifically, the study showed 34% of Europeans and 38% of Americans surveyed would prefer going cashless.

It will come to the U.S. soon enough.

Of course, there’s no denying that digital payments are certainly convenient. I use them myself in the form of credit and debit cards, wire transfers, automatic deposits and bill payments.

The surest way to lull someone into complacency is to offer a “convenience” that quickly becomes habit and impossible to do without.

The convenience factor is becoming more prevalent, and consumers are moving from cash to digital payments just as they moved from gold and silver coins to paper money a hundred years ago. Just look at the Swedish example.

But when the next financial panic comes, those without tangible wealth will be totally at the mercy of banks and governments who will decide exactly how much of your own money you’re allowed to have each day.

Just ask the citizens of Cyprus, Greece and India who have gone through this experience in recent years.

Other dangers arise from the fact that digital money, transferred by credit or debit cards or other electronic payments systems, are completely dependent on the power grid. If the power grid goes out due to storms, accidents, sabotage or cyberattacks, our digital economy will grind to a complete halt.

That’s why it’s a good idea to keep some of your liquidity in paper cash (while you can) and gold or silver coins. The gold and silver coins in particular will be money good in every state of the world.

For now, Germans are the most resistant to going cashless. Almost 80% of transactions in Germany are done in cash, and many Germans never use credit cards. The German experience with hyperinflation after WWI and additional monetary chaos after WWII certainly plays a part in this resistance to the cashless society.

Other countries, such as Romania and Bulgaria, which have recent experiences with currency and financial crises, also tend to use cash extensively.

I hold significant portion of my wealth in nondigital form, including real estate, fine art and precious metals in safe, nonbank storage.

I strongly suggest you do the same. The cashless society could be here quicker than you think.