Here’s something you don’t see on Wikipedia every day… 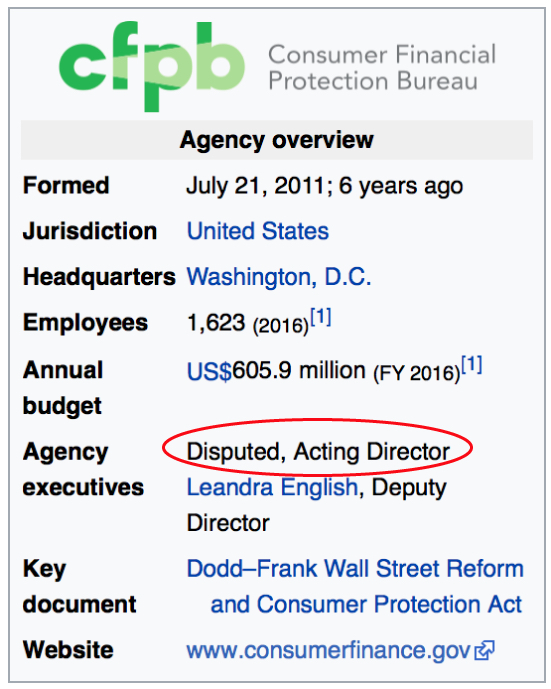 “Disputed” is the sort of word you might expect to see associated with an obscure island in the Pacific Ocean, or the president of a third-world country — not the head of a bureaucracy in Washington, D.C.

The 1,623 employees at the Consumer Financial Protection Bureau (CFPB) literally don’t know who their boss is this morning.

The CFPB is an agency set up under the Dodd-Frank Act of 2010 — the law that was supposed to rein in the too-big-to-fail banks but instead allowed those banks to grow even bigger. (Cynics would say that was the plan all along.)

On Friday, CFPB director Richard Cordray — an Obama appointee — announced his resignation. Cordray fashioned himself as a crusader — defending the little guy against rapacious lenders. President Trump, in his zeal for deregulation, has been keen to curb the CFPB’s powers.

Trump immediately named his budget director Mick Mulvaney to do double duty as acting director of the CFPB until the slot is filled permanently. But Cordray says the way the law is written, he’s the one who appoints an interim director… and he named his deputy, Leandra English.

Last night, English sued the Trump administration — setting off a court battle. This morning, Mulvaney showed up at CFPB headquarters — ready to win over the troops. 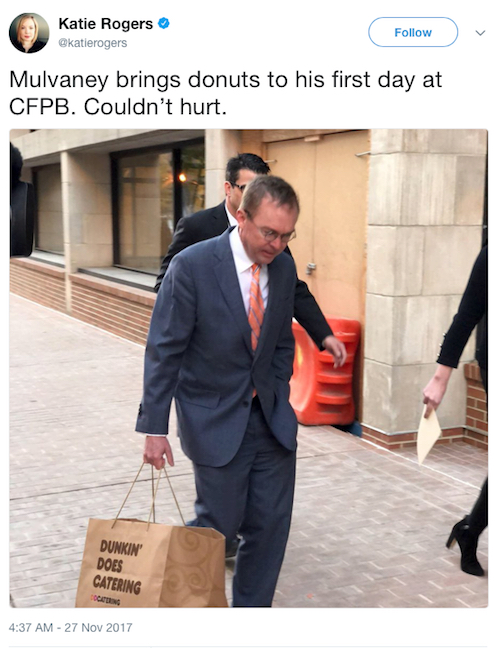 It’s all great theater, but pointless in the final analysis: Trump will appoint a permanent successor, who can win confirmation with a simple majority in the Senate.

[Missing from the mainstream financial media’s coverage is this context: Cordray’s term didn’t expire till next July. If he was serious about manning the ramparts against Trump’s deregulation steamroller, he could have stuck it out till the last possible moment. But Cordray evidently places a higher priority on running for governor of Ohio next year.]

“It’s no secret that Trump’s economic agenda is likely to help the U.S. financial industry,” says our income specialist Zach Scheidt — stepping back to examine the bigger picture.

“Not only is Trump planning to cut corporate taxes (helping banks keep a larger portion of their earnings and giving banks’ corporate clients more money to spend), but Trump has also been a very big proponent of less regulation for the mega-banks.

“I have mixed feelings about some of these changes. While I agree that unbridled profit-seeking in the financial sector helped to create a toxic situation for the global economy in 2008, I also believe that too much regulation can stifle growth and keep banks from lending capital that would actually help our economy grow.

“There needs to be a balance between giving banks freedom to lend capital to good businesses and individuals in a way that stimulates growth as well as regulation against situations that encourage predatory lending and excessive risk taking.

“Thank goodness it’s not my job to figure out exactly where that balance should lie. Instead, it’s my job to help you profit from market opportunities as regulators and legislators continue to adjust the market that businesses operate in.”