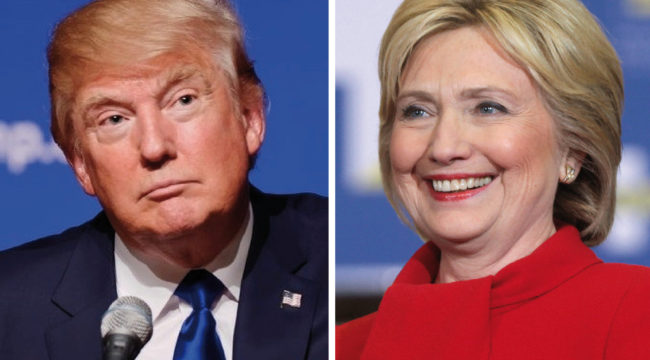 Finally… at long last… The Donald and Herself came to blows in televised debate.

Up to 80 million Americans looked on last night. Some in horror. Others in delight. Still others in dumbstruck wonder, as one eyes a Dali.

Who won? Depends on who you ask.

A Drudge Report poll says Trump by knockout. A thumping 82% of respondents said he won. But CNN — its viewers flocked in a different section of the arena — gave Clinton an easy decision on points, 62% to 27%.

(Who do you think won? Tell us here: dr@dailyreckoning.com.)

The markets conducted their own post-debate poll. And devil-you-know Hillary’s their man: “If global investors are to be believed,” says Reuters, “Hillary Clinton is a step closer to the White House.”

Stock futures rallied after the debate, teeing up a ripsnorting day on Wall Street. The Dow’s up 131 points at writing. The S&P’s up 13, the Nasdaq up 38. Crude’s down a buck. And gold — the weather vane of uncertainty — is down a full 14 bucks today. Decision Hillary.

The Mexican peso also surged 1.5% against the dollar today. Many consider the peso a market referendum on Trump. “Anyone who had wondered what had caused [peso] weakness over the past few weeks received a clear answer last night,” bleats Esther Reichelt, of Commerzbank. The clear answer being a Hillary presidency.

But is the answer really so clear? Not according to Citigroup’s Harvinder Sian:

“The first U.S. presidential debate has seen no knock-out performance from either candidate… The debate itself broke little new ground and is unlikely to be seen as a turning point in the election no matter the final outcome.”

“The press verdict on the first U.S. presidential debate is that Hillary Clinton ‘won,’ but Donald Trump didn’t lose badly enough to really reduce the uncertainty.”

It’s six more weeks — and two more debates — until E-Day, Nov. 8. An eternity in election years. Carter had an iron 47% to 39% lead over Reagan shortly before the 1980 election, for example. He lost a week later. What changed?

In the Reagan-Carter debate just one week before the election, Reagan beat Carter hollow. And that late victory carried him through. (Our own David Stockman played Carter in mock debates to get Reagan tuned up.)

Point being it’s early. And then there’s an election-changing “October surprise” hanging in the air…

Jim Rickards: “There’s always the possibility of an “October surprise” in the U.S. presidential campaign. We’ve seen those before. Since this campaign year has been more unpredictable than most, we can be fairly sure we’ll see an October surprise this time.”

David Stockman agrees with Rickards: “The market has overwhelmingly priced in a Clinton victory, if not landslide. If there is dramatic election-moving disclosures or disclosures that change that perspective, it will impact the market in a very large way.”

WikiLeaks is out there, lurking. They could have an ace card up their sleeve, waiting for the right moment. “Mischief, thou art afoot”…

And the next two debates could turn up something. So the next several weeks could be, in a word, volatile. Stay tuned.

But whoever wins the election, he/she might end up demanding a recount. Analyst Peter Boockvar says pity on him/her for the mess that likely awaits him/her:

“As we are in the second-longest bull market of all time and as we approach the eighth year of this economic expansion, odds are high that whoever the next president is they will preside over a recession, a bear market and rising debts and deficits.”

They say a president ages rapidly in office. If Boockvar’s prediction is right, the next one could age 36 years in four or less. Hillary’s 68. Trump’s 70.