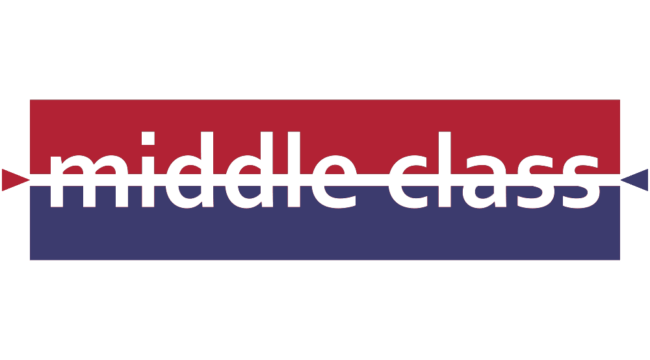 What exactly is the Middle Class, and what unique role does it serve in the economy? Given that the Middle Class is constantly invoked by politicos and economists, you’d think the status quo has a solid understanding of the Middle Class. Alas, it isn’t that simple.

The conventional view defines the middle class by income, education, or type of labor being performed. These are all superficial attributes and ignore what actually differentiates the working class from the middle class.

Yes, the middle class tends to earn more, has higher educational credentials and performs white-collar labor rather than blue-collar labor.

But getting a higher education credential and increased pay doesn’t automatically provide a middle class role in the economy, nor does performing white-collar work.

None of these automatically move the individual up the social mobility ladder from near-zero ownership of capital (working class) to meaningful ownership of productive capital (middle class).

The middle class is fundamentally a means of transforming labor into capital via savings and investment. The traditional ladder of social mobility from the working class to the middle class has to do with capitalizing work: time and savings are invested in higher education thus, capitalizing future labor by increasing productivity.

The working class is defined not by credentials or type of labor but by limited access to the means to transform their labor into capital.

In the classical Marxist view, there is a bright line between labor and capital: the proletariat labor in the factories owned by the capitalist industrialists who depend on monopoly capital controlled by the commercial/investment banks.

The class of small business — tradecrafts, commerce, professionals, etc. — is merely a wedge between the dominant classes of labor and capital.

In this view, the exploitation of labor is the dominant force of capitalism. While labor is indeed exploited in many cases, the dynamic that this schema misses is the essential role of middle class credit/debt and consumption, which generates profits for the big owners of capital.

Low-wage workers benefit their employers but not the banks or those who profit from selling goods and services to higher-wage workers — the middle class.

Debt is immensely profitable, so low-income workers have a limited pool of profitability. The financial services are expert at ripping off the working class with payday loans, check-cashing services, sky-high used auto loans, rapacious late fees and overdraft charges. But again, there is only so much blood that can be extracted from low-wage workers.

In other words, modern capitalism stagnates without a vibrant, creditworthy middle class that borrows and spends freely. Remember, profits flow from the high levels of debt and aspirational consumption that low-wage, insecure precariats cannot afford.

But here’s the rub: most middle class debt stems from the aspiration to transform labor into capital via higher education (student debt) and home ownership (mortgages).

As middle class wages lose purchasing power and incomes become more precarious (as employers offload healthcare and pension costs onto employees and shift workers from employees to gig-contract workers), the ability of the middle class to borrow and consume more falters.

Even worse, these time-honored avenues to ownership of productive capital are no longer reliable. Higher education credentials no longer guarantee stable, ample wages. Further, home ownership in a housing-bubble-addicted economy is less a means of saving and more a chip in the bubble-economy casino.

Debt serfdom awaits the aspirants to middle class ownership of productive capital. While debt payments are guaranteed, the rewards for taking on the debt are prone to sudden collapses in demand for credentials and assets purchased with debt.

Debt only works for the middle class if incomes and income security rise due to improving productivity and access to productive capital.

Both productivity and access to productive capital are eroding, so what made sense in past generations — borrowing for university education and a home — is now, increasingly, a pathway to debt-serfdom.

The status quo “solution” to the decline of middle class ownership of income-producing capital is an economy that is now totally dependent on speculative bubbles.

The idea here is an asset bubble ever higher, and those in the middle class who own these assets will reap capital gains that will offset their declining purchasing power and income security.

Unfortunately, this “solution” has only enriched the top 10%, as the bottom 90% collect a meager 3% of all income from capital.

Liabilities Instead of Assets

That disparity indicates that…

1) The bottom 90%, which includes the middle class, owns near-zero income-producing capital and…

2) What capital they do own is either rapidly depreciating “stuff” (vehicles, appliances, etc.) that generates zero income or dead-money assets such as family homes that cost a fortune but produce no income and are no longer reliable investments. The next bubble burst might evaporate the phantom homeowners’ equity generated by the serial housing bubbles.

As the middle class stagnates, so do the banks, the producers of goods and services, and the lower-wage working class who labors in services and low-productivity producers.

And as the middle class awakens to the fact that the rungs of social mobility are broken, it’s easy to predict a systemic breakdown.

The winners in speculative bubbles are those fortunate enough to have bought homes, bonds, rental properties, land, etc. decades ago when a house could be had for three times median income and bonds paid solid, above-inflation returns.

The bottom 90% attempting to find productive assets at affordable prices now are out of luck. Consider a 900 square foot home built in 1916 in the desirable San Francisco Bay Area community of Albany, CA. The house sold for $135,000 in 1996, 3.8 times the national median household income.

Only those inheriting wealth (or who chose wealthy parents), those earning over $250,000 annually, or speculators who just scored big gains in bitcoin or GameStop could afford this very small, modest house.

That’s what speculative bubbles do to the middle class: they leave them behind forever. Those who bought 25 years ago entered the top 10% in wealth due to the bubblicious increase in the value of their home.

A few winners in the casino who sold at the top might have edged into the top 10%, but the vast majority of gamblers in the casino cannot compete with the insiders, manipulators and pros, so they lose ground. This is why the bottom 90% collects an insignificant 3% of all income from capital.

The middle class has already collapsed, but thanks to debt and bubbles, this reality has been temporarily cloaked. All bubbles pop, and all excessive debt ends in default.

When these inevitably occur, the reality can no longer be hidden.