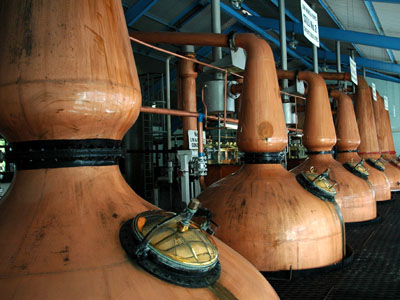 Now this is energy efficiency: Scotland might one day run its power grid using the waste from whiskey-making.

The Scottish newspaper The National informs us a firm called Celtic Renewables has just won a grant of 10,000 euros from the European Association for Bioindustries.

The technology is proven — it just hasn’t been cost-effective till recently, according to Celtic Renewables founder Martin Tangney. “It’s a fermentation known as the ABE fermentation, which was developed in the U.K. mainly to produce acetone for explosives in the First World War, and by the end of the Second World War, it was the second biggest biological process that the world had seen.

“It died out in the 1960s,” Tangney goes on, “because it couldn’t compete with the petrochemical industry as a source of these chemicals. But in 2006, an American inventor by the name of David Ramey drove his 1992 Buick 10,000 miles around America using only butanol in a totally unmodified engine. It showed the world that this chemical could be used as an advanced biofuel.”

We’ll drink to that. It’s the weekend, after all!

Mr. Tangney’s project is a droplet in a $12.2 trillion tidal wave of investment.

That’s how much money will be poured into new power generating capacity over the next 25 years, according to Bloomberg New Energy Finance. And two-thirds of that total will go toward renewables like solar and wind. And butanol, to be sure.

The Bloomberg report says the world’s power-generating capacity will double as a result by 2040. And fossil fuels like coal and natural gas will make up only about one-third of that total — down from two-thirds yesterday morning.

Solar will become the globe’s cheapest source of electricity by 2030, according to the Bloomberg report.

Already since 2009, the cost of a typical solar project has fallen 59%. And as our Byron King reminded us earlier this month, buyers will snap up 50 million solar panels this year — up from 20 million in 2010.

“At that rate,” Byron teases out the implications today, “solar industry experts predict that the solar industry alone will consume 100 million ounces of silver this year.”

“Quality photovoltaic units require significant amounts of silver,” Byron explains. Crystalline silicon PV units, which make up about 85% of the solar panel market, each use about 0.7 ounces of silver. More is ultimately used in the fabrication of silver paste, used in 90% of solar panels.

“But if 0.7 ounces doesn’t sound like much, it’s still about 100 times as much as your cellphones uses. And wait until you see how it adds up.”

“If the solar industry uses up 100 million ounces of silver this year, that’s about 10% of global silver production,” says Byron.

“As recently as 2008, solar consumed only 19 million ounces a year. That’s 526% growth in seven years. And it’s only just beginning.

“After all, it takes at least 80 TONS (equal to 2.56 MILLION ounces!) of silver to generate a gigawatt of electricity from solar, and industry analysts expect the world to add another 40-50 gigawatts of solar power production in 2015. And solar demand only appears to be increasing each year, not slowing down.

“Meanwhile, supply isn’t holding up. In 2013, the last year we have numbers for, global silver supply fell short of global demand by 133.3 million ounces.

As of yesterday morning, silver fetches $15.74 an ounce — almost as low as it’s been anytime in the last five years. Just sayin’…