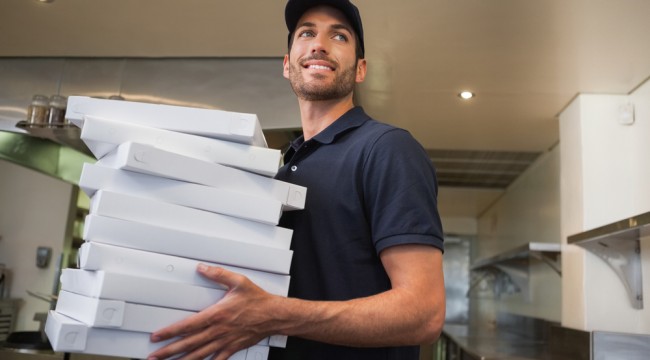 Where You Can Make $56,000 a Year Delivering Pizzas

Few statistics are more debated than unemployment numbers. The former head of the Bureau of Labor Statistics (BLS), the agency publishing unemployment numbers, estimates the figures are probably 3% too low. The unemployment numbers are based on people actively looking for work. The first figure shows the percentage of labor force participation. Each horizontal line on this chart represents 2 million people. Since the official start of the 2008 recession, 6 million fewer people are labor participants. Four million fewer participate since the recession officially ended in mid-2009. Think that a Bachelor’s degree protected a labor participant? The second figure shows an even smaller percentage of college graduates in the labor force though the phenomenon started before the official end of the 2008/2009 recession. 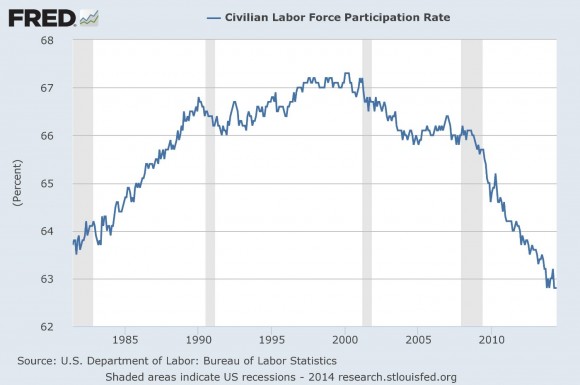 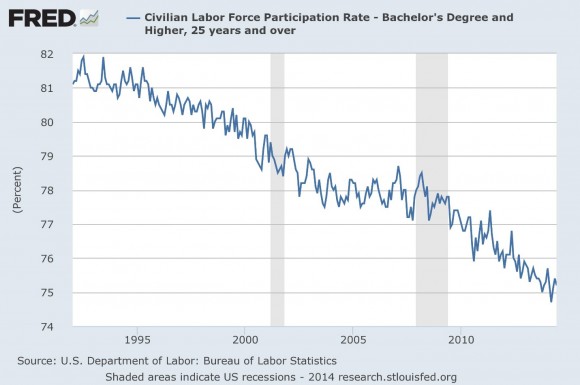 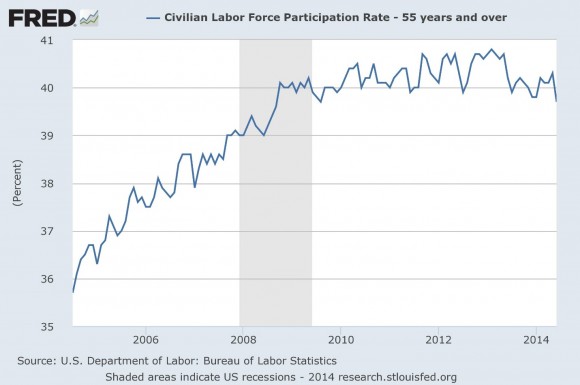 There are several implications for business. First, there is an ample pool of labor. There are instances of specialized positions in short supply but in general there are plenty of workers on the “sidelines”. Those sidelines are no doubt made more comfortable with extended unemployment insurance though even 99 weeks arrives eventually. Troubling for college grads is their decreasing participation in the labor force given exploding college debt now north of $1 trillion.

This condition amplifies the number of workers available for business that are trained beyond a high school diploma. The greater participation rate of those 55 and older indicates additional competition for positions where a young person or college grad may vie for the same job.

Even apparently glowing job reports merit scrutiny. For example, a press release [Jan 2014] of a net 236,000 increase in the employment number did not publicize the fact 400,000 positions were part-time. Part-time usually implies lower total income and reduced, if any benefits. The increase in part-time employment is no doubt contributing to stagnant median household income and a new high of 50 million participants in SNAP (Supplemental Nutrition Assistance Program)…aka food stamps.

The combination of workers on the sidelines, the entry of those who may be in “retirement”, and stagnant household income translates into flat to downward wage pressure. Not only is there an ample supply, but labor has a strong chance of being seasoned, trained academically or both. With such a broad choice, the cost of labor should remain steady to lower on a unit cost basis. There will certainly be specific skill sets in short supply but in general, labor availability is ample.

Stanley, North Dakota is a town of roughly 2,000 people situated in the northwest corner of the state. Recently an ad appeared in Craigslist soliciting for a pizza delivery/pizza maker. Nothing unusual there. What is unusual was the $56,000 salary they projected for a 49-hour work week (along with paid vacation bonuses and matching contributions to a savings account).

In a similar vein, Walmart offered jobs for $17/hr, well above the state minimum wage of $7.25. Why the largesse? Stanley sits on the Bakken oil formation. The boom times are in play for the Dakotas who are benefiting from new technologies that unlock vast oil reserves. The pizza retailer is willing to project $56,000/year earnings ($36k salary and $20k in tips and delivery charges) because they are confident in being profitable and not due to a government mandate.

Each individual employer has the best ability to diagnose the wage they are able to pay and still make a profit. The pizza retailer could advertise the position for the state minimum wage rate and estimate a yearly salary of about $18,000. Instead, they know they can make a profit with a salary of twice that figure.

If government mandates a wage for a minimum skill level, what might the options be for the employer? The employer could raise the price of their goods and services. Unfortunately, there is little pricing power in the market. As noted in The Sentinel Financial Report, the Fed’s favorite price index, the Personal Consumption Expenditure (PCE) has been trending down during the economic recovery. This downward trend reflects depressed consumer demand and with it, decreased pricing power. In France, where the minimum wage is an equivalent $12.12/hr, McDonald’s replaced some of their workforce with kiosks. Visitors to retailers like Walmart, Lowes, or perhaps your local grocery store can attest to self-checkout lanes where one employee oversees up to four registers.

If the goal of mandating a minimum wage is to derive an acceptable standard of living, perhaps it should be $20 or $30/hr. If you were a business owner and government forced you to pay your least skilled employees $30/hr when they are now paid $7.25/hr, how would you react? How would organized labor respond if a wave of lower skilled jobs emerged paying wages similar to their own membership?

Left unfettered, a market wage rate is the point where those willing to work make their labor available to those willing to employ. One thing is certain. A minimum wage can deprive people of their right to earn a living commensurate with their skill. If government mandates a minimum wage that is higher relative to the amount of goods or services produced, businesses will seek alternative sources of labor inputs. In Stanley, North Dakota pizza makers are going to be making serious dough (pun intended) but only because they can be employed profitably. If government policy aims to increase the country’s labor force participation rate, a higher minimum wage is unlikely to be the solution.

Ed. Note: For a detailed list of ways you can keep government policy from intruding on your life, sign up for the FREE Daily Reckoning email edition, right here. Once inside, you’ll gain access to the exclusive Daily Reckoning Research Library that has a slew of great reports including one that shows you specific ways to opt-out of Obamacare. So don’t wait. Sign up for FREE, right here.