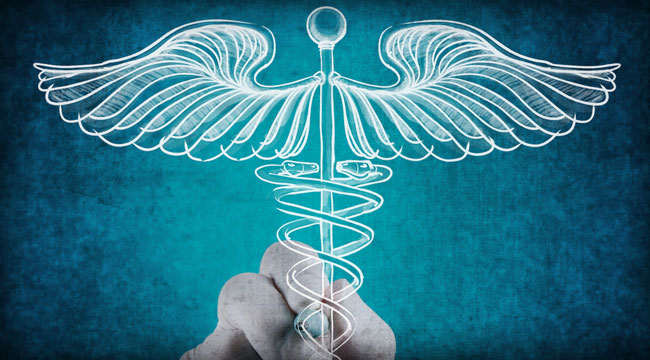 When Your Doctor Succumbs to the Pressures of Obamacare

John Foust, a Democrat running for the 10th congressional seat in Northern Virginia, is — like Gov. Terry McAuliffe and other state Democrats — gung-ho to expand Medicaid. His wife’s position is, shall we say, a bit more nuanced.

Foust has slammed his opponent, Republican Del. Barbara Comstock, for her opposition to expansion. He has spoken of the need to “make health care available to 400,000 Virginians,” insisting it is “the right thing to do.”

Foust’s wife, Dr. Marilyn Jerome, practices with Foxhall OB/GYN in northwest Washington, D.C. Six of its physicians made Washingtonian magazine’s list of “Top Docs,” and one of them — Nichole Pardo — was featured on the cover. Not too shabby.

The practice is notable for another reason as well: It doesn’t accept Medicaid patients.

Without the individual mandate, the rules on insurance companies would bankrupt them, and the whole system would collapse.

This draws attention to an under-covered aspect of the debate over Medicaid expansion. While advocates speak of it as “making health care available” to the needy, what it really does is make coverage, rather than care, available to them. A newly enrolled Medicaid patient can get the money to pay a doctor. But can she get the doctor to take it?

In a commentary on the Foxhall practice’s website, Dr. Jerome praises the Affordable Care Act — particularly because now “women cannot be denied insurance” and because the plan’s standards mandate coverage for a wide variety of treatments.

Doctors, however, can operate under a much different set of standards. They can deny care all they want. Statewide, roughly one in five physicians will not accept new Medicaid patients — usually because Medicaid pays only two-thirds as much as private insurance does, on average.

The point here isn’t to shame physicians or to provoke a marital spat. The incongruity goes to a much broader issue — regarding individual responsibility in a system that is becoming increasingly collectivized.

You might have read recently about the blowback some pharmaceutical companies have been getting for charging stratospheric prices for new wonder drugs, such as Sovaldi — a life-saving treatment for Hepatitis C. Two U.S. senators, Democrat Ron Wyden and Republican Charles Grassley, are demanding the company that makes Sovaldi justify its $84,000 price tag. Similar questions have been raised about Kalydeco, a life-saving treatment for cystic fibrosis that costs more than $300,000 per year.

Prices like that provoke a lot of anger. Many people think it’s wrong to charge more than patients can pay. Much of the outrage also comes from insurance-company self-interest. The trade group AHIP (America’s Health Insurance Plans) routinely cranks out diatribes against what it considers unjustified prices and profit margins in the pharmaceutical industry.

This is a sore spot for the insurance industry. Under Obamacare’s medical-loss-ratio rules, insurers must spend at least 80% of premium dollars to pay for treatment (rather than, say, for overhead). Drug companies face no such government-imposed caps. Yet.

Indeed, insurance companies now face a whole raft of mandates governing whom they must insure and what treatments they must cover. The rationale for such requirements is that to deny someone insurance because of a previous medical condition, or to decline to pay for certain categories of medical care, is immoral.

Obamacare also imposes obligations on individuals: Everybody must obtain insurance coverage, or pay a hefty fine (or, as Supreme Court Chief Justice John Roberts calls it 50% of the time, a “tax”). This is partly for people’s own good, but mostly the requirement exists to make Obamacare work. Without the individual mandate, the rules on insurance companies would bankrupt them, and the whole system would collapse.

In liberal democracies, government is supposed to be the servant — not the master.

Abiding by the individual mandate therefore constitutes what President Obama, in another context, recently called “economic patriotism.” He was castigating companies that use overseas mergers to avoid U.S. taxes. “You know,” he said, “some people are calling these companies corporate deserters.”

Ominous language. Treating private enterprise as a conscript in service to the State is a philosophy with an ugly lineage. In liberal democracies, government is supposed to be the servant — not the master. In health care, however, the relationship is growing increasingly inverted. As a result individuals are forced to buy insurance, and insurance companies are forced to accept them. Now many people want to force drug companies to cut prices. And so on.

Forcing doctors to accept Medicaid patients would be an obvious, logical extension of these trends. If insurance companies can’t turn people away, then why should physicians be allowed to? If drug companies can’t charge more than people can afford, then why should doctors? So far, no elected officials have yet proposed reining in the limited liberty that doctors still enjoy. But such proposals could very well come, one of these days. Though probably not from John Foust.

Ed. Note: Doctor mandates might be just around the corner, but if you were a reader of the FREE email edition of Laissez Faire Today, then would discovered another option that would provide you direct access to a doctor for a fraction of what you’re likely paying now. It’s just one small benefit of being a reader of the FREE Laissez Faire Today. Click here now to subscribe and make sure never miss out on another great opportunity like this.

Across the country, 57 million Americans are covered by Medicare. But even under the “protection” of Medicare, seniors are facing steadily rising costs. But this news isn’t all bad because today editor Zach Scheidt shows you how to save enough to cover these expenses…