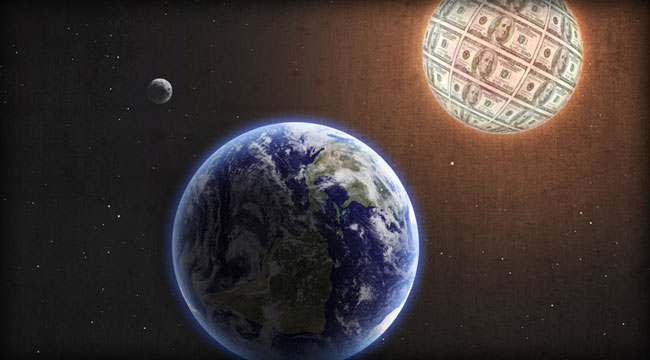 When the Earth Stops Revolving Around the Dollar

Nicholas Copernicus (1473-1543) is known today as the “Earth goes around the sun guy,” but he also advised the Royal Prussian parliament on monetary reform over a period of several years. During this time, he wrote an essay known as the Treatise on Money. A new translation of Copernicus’ essay by Gerald Malsbary has recently been released via Laissez Faire Books. The book has many gems — things so simple and obvious that they have been forgotten by the majority of academic economists today, with the usual bad consequences.

“Money, or coinage, is gold or silver that has been specially marked — in accordance with policy established by any government or head of government — for the purpose of reckoning the prices of things that are bought and sold. Money is therefore a kind of common ‘measuring stick’ for the valuation of things. Now, whatever is taken as a measure has to be stable — must keep to a fixed limit. Otherwise, public order will necessarily be disturbed, and the buyers and sellers of things will be cheated many times over, just as if basic measures of length [Latin ulna, or ell], bulk measure [Latin modius, or peck], or weight did not have a fixed quantity.”

This is what I call the Classical approach to money — that it should be as stable and neutral as possible, so that it can serve as a “common measuring stick in the valuation of things.” For thousands of years, going back literally to the first civilization in Mesopotamia, the Sumerians of 3500 B.C., this goal has been achieved by using money based on gold, and its small-denomination adjunct, silver.

In those days too, governments thought that perhaps having a stable, reliable, unchanging measure of value was a rather boring way of going about things. How much more fun to make some fresh money from nothing! In those days, it meant making coins with higher denominations or less silver. This became the common habit, and continued for decades. Copernicus laments:

“But what had over so long a period of time become the inveterate habit (or license) of adulterating, pilfering, and cheapening the money, has not ceased in our day. For what it later became and what it is today I am ashamed to say. The value has collapsed so much that now thirty marks scarcely contain a pound of silver!”

Today, it has been forty-two years since the United States formally abandoned its policy of maintaining the value of the dollar at one thirty-fifth of a troy ounce of gold — on August 15, 1971. The dollar’s worth today is a little vague; but at $1200/oz, it would be worth 1/34th of its Bretton Woods value.

Nobody seems particularly bothered by this, just as nobody was much bothered in Copernicus’ day. It has just become the way things are. (Copernicus traced this pattern back over a century of Prussian history.) The “inveterate habit of adulterating, pilfering, and cheapening the money” has become our normal course of affairs, and I suspect the Federal Reserve’s present money-printing efforts will ultimately represent just another chapter in this long story.

“But perhaps someone will object, ‘A leaner money is more advantageous to human uses: it really helps the poor, by bringing a lower price of groceries and by supplying the other necessities of life more easily.’”

Here we have what I have called the Mercantilist view of money, which is that it should be manipulated by the state to produce certain short-term policy goals. Perhaps “bringing a lower price of groceries” doesn’t make much sense to us today, but various notions related to “helping the poor” (lower unemployment, lower mortgage rates, “wealth effect”) have always been popular public justifications for Mercantilist money-jiggering.

But does it work? What are the consequences? After over a century of pursuing this strategy, did Prussia find prosperity and abundance? Let’s see what Copernicus said:

“But if such persons will only consider the common good [communis utilitas], they certainly will not deny that an excellent currency is good not only for the state but for themselves and all classes of people, and that cheap money is harmful. The truth of this is clear, not only for many other reasons but especially thanks to that wise teacher, experience: we see countries that have good money flourishing most of all, and those with poor money declining and perishing…

“[Over the past century,] the money has been cheapening more and more every day, and our country through this pestilence and other catastrophes has been nearly brought to ruin. It is also well known that wherever cheap money is in use, the practice of the better arts and human talents is neglected through laziness, lack of interest and a kind of cowardly idleness, and there is no abundance of anything.”

We are forty-two years into our own experiment in funny money. During that time, even according to comically rosy government statistics, the median male full-time income has stagnated. Median household “real” income has fallen seven percent since 2009, and is now back at a level first reached in 1988.

Even that dismal figure reflects adjustment by the government’s heavily scrubbed CPI index, which has become particularly fictional over the last decade or so. What would things look like sixty years from now, when like Copernicus, we look back upon a century of this funny-money self-impoverishment?

Ed. Note: When a nation abandons its own currency – especially in the name of prosperity – and no one bothers to notice, you know something is seriously wrong. That’s why it’s so important to be aware of all your options, so that no matter what, you can safely manage and maintain your wealth. And that’s why The Daily Reckoning exists. Every single day, it helps readers learn how they can achieve all of their financial goals by giving them unfettered access to the world’s best research and profit opportunities. If you’re not getting the FREE Daily Reckoning email edition sent straight to your inbox, you’re not getting the full story. To fix that, click here now to sign up for free.