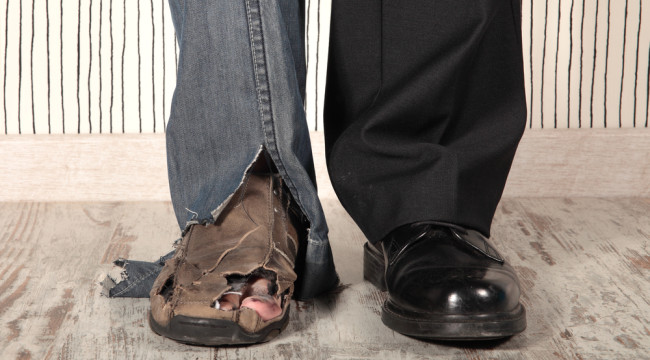 When the Aristocracy Leaves the Commoners in the Dust, the Empire Is Doomed

Historian Peter Turchin identified “the degree of solidarity felt between the commons and aristocracy” as a key ingredient of the Republic of Rome’s enormous success. Turchin calls this attribute of social structure vertical integration, a term that usually refers to a corporation owning its supply chain.

In Turchin’s meaning, it refers to the sense of purpose and identity shared by the top, middle and bottom of the wealth/power pyramid. One measure of this vertical integration is the degree of equality/inequality between the commoners (shall we call this the lower 90% of American households by income?) and the Power Elite aristocracy (top .5%, or perhaps top .1%).

The vertical integration of the Roman Republic’s social strata is striking. In his book War and Peace and War: The Rise and Fall of Empires, Turchin tells this anecdote:

“Roman historians of the later age stressed the modest way of life, even poverty of the leading citizens. For example, when Cincinnatus was summoned to be dictator, while working at the plow, he reportedly exclaimed, ‘My land will not be sown this year and so we shall run the risk of not having enough to eat!'”

Can you conjure up the image of any presidential hopeful in a field actually working to grow food for his/her family?

Turchin goes on to say this vertical integration is a feature of all successful empires:

“(This) lack of glaring barriers between the aristocracy and the commons seems to be a general characteristic of successful imperial nations during their early phase.”

Once the barriers between commoners and the Elite become impassable, the Empire is doomed. As noted in Following in Ancient Rome’s Footsteps: Moral Decay, Rising Wealth Inequality (September 30, 2015), military service was a distinguishing feature of the Elites and landowning commoners of Rome.

Indeed, as noted in the above essay, Rome’s aristocracy suffered higher rates of KIA (killed in action) than the commoners.

Can you conjure up the image of any presidential hopeful in a combat zone risking his/her life? Please don’t make me laugh by saying “yes”… George Bush I was the last president to actually risk his life in theater, in combat.

Imagine this happening in present-day America: “The wealthy classes were also the first to volunteer extra taxes when they were needed.”

Paging all presidential hopefuls–here’s your chance to reclaim the glory of Republican Rome by volunteering to pay higher taxes. Hillary? The Donald? Anyone?

Accessibility is another measure of low barriers between the wealthy Elites and the commoners. A few corporate leaders are making an effort to be accessible to their employees. Tony Hsieh, CEO of Zappos, lives in a trailer that is often the site of meetings. Is this perfect vertical integration? No, but it’s certainly a step in the right direction compared to wealthy elites buying and fortifying islands against anything but a drone/cruise missile strike.

This chart shows the number of households in each income category, broken into $5,000 segments. The last two bars to the right are those making $200,000+ annually, roughly 4% of households.

What this doesn’t show is the preponderance of income/wealth in the top .1%: 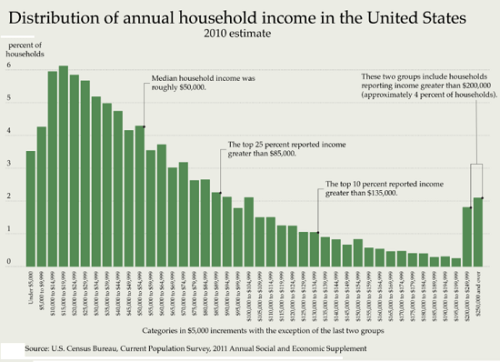 We all know the barriers between the commoners and the Elite rise higher every year, despite the claims of the corporate media and the Power Elite aristocracy, which is naturally desperate to maintain the fantasy that they are “regular folks” despite their immense wealth.

The Power Elite aristocracy isn’t dumb; they fully understand once the illusion of their shared purpose and identity with the commoners is shattered, their invulnerability is history.