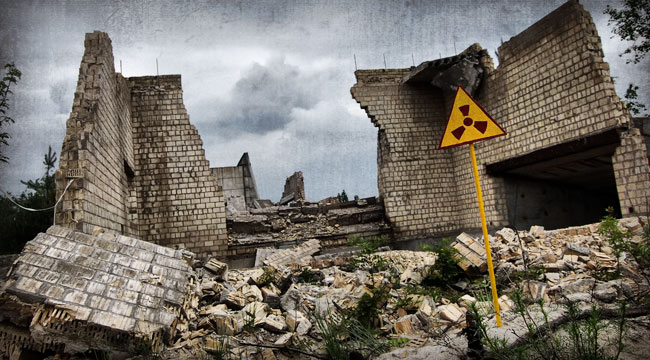 Ah, yes… the sword of Damocles hanging over the global economy.

By June of last year, total world derivatives were estimated at $1.5 quadrillion — (again, 14 zeros!) — an increase of 194% over the avalanche that triggered near financial collapse in the Panic of ’08.

The derivatives book has grown. And so have the banks!

The “too big to fail” banks at the helm during the 2008 crisis are now consolidated and nearly twice as big today as they were eight years ago. We’ll get back to that fact in a moment…

“It started with Russia, then it metastasized. So there comes a time when it’s not about the markets anymore. It’s about you. The market is systematically trading against you. How it started doesn’t matter. Where it’s going doesn’t matter. You are not gonna be allowed off the mat.”

And when that happens… everybody wants their money back. Everybody. Things go from bad to worse in a hurry.

“Our agreements,” Jim continues, “which I had written and negotiated, were so tightly drawn that nobody could call us for margin unless there had actually been a mark-to-market loss. There was no extra margin. So when cash went to zero and we actually defaulted, there would be nothing left.

“At that point, we took the whole balance sheet and gave it back to Wall Street… At the time, I said, ‘Look. All that would happen to us is we would have slept in the next day. You guys would have to unwind $15 billion of equities and a trillion dollars’ worth of fixed income on five continents. Good luck.’

“If that had happened, all the Wall Street banks would have failed, starting with Lehman. Lehman was always the weakest one. It would have been Lehman, and then all the dominoes would have fallen. You would have had ’08 and ’98.”

Jim was subsequently retained by the consortium of Wall Street banks that had bailed LTCM out… because he and his team were the only ones who could unwind the trades left on their balance sheets.

“So I did my job,” Jim remembers, “We came out clean, which we should have. That wasn’t a credit to me. That was a credit to everybody. But there was a lynch mob. I mean, the House committees wanted to hang us. The press wanted to hang us. They hired helicopters to fly over our houses. We had camera crews outside. Nobody remembers any of this, but that’s the way it was.

“And I was going through the trauma of having lost all my net worth. If you talk to psychologists, they’ll say the three most difficult things in life are death, divorce and losing money. Fortunately, I only had one out of three. But it was traumatic.”

And so Jim set out on what he describes as a “10-year odyssey” to solve the problem of risk in the financial markets. (He relays much of that odyssey here.)

Here’s where the story takes a turn for the dire. After a 10-year search, including his much vaunted stint with the CIA, Jim is convinced the risk-assessment model the Federal Reserve and the big Wall Street banks are using is flawed.

“My former partner,” Jim says, “our colleagues and myself almost destroyed the world using a certain view of the world. He was on faculty of the Haas School of Business at Berkeley, and had the office next to Janet Yellen’s. He knows Janet very well. After Long Term breaks up. I go through this 10-year odyssey. I figure out that everything those people believe is wrong. This isn’t a belief system. It’s empirically wrong.

“Meanwhile, Janet Yellen goes on to the San Francisco Fed, makes her way to the Board of Governors and becomes chairwoman,” carrying in her back pocket the flawed worldview that took down LTCM nearly 20 years ago.

“It didn’t have to be this way,” Morgan Stanley’s own Stephen Roach lamented as early as 2005. “The big mistake, in my view, came when the Fed condoned the equity bubble in the late 1990s.

“It has been playing post-bubble defense ever since, fostering an unusually low real interest rate climate that has led to one bubble after another. And that has given rise to the real monster — the asset-dependent American consumer and a codependent global economy that can’t live without excess U.S. consumption.

“The real test was always the exit strategy.”

By 2008, that exit strategy included massive consolidation among the world’s biggest banks.

In the late 1990s, JPMorgan, to use just one example, was more than five different banks: The old J.P. Morgan, Manufacturers Hanover Bank, Chase, Chemical Bank and Wachovia. Today all of those banks and more have been mushed together into one $1.6 trillion mega-bank: JPMorgan.

“The so-called Big Four institutions,” a commentator on CNBC reminded us in March, “JPMorgan, Bank of America, Citigroup and Wells Fargo… [have] some $8.2 trillion in total assets. That’s 154% more than the rest of the top 50 banks combined.” 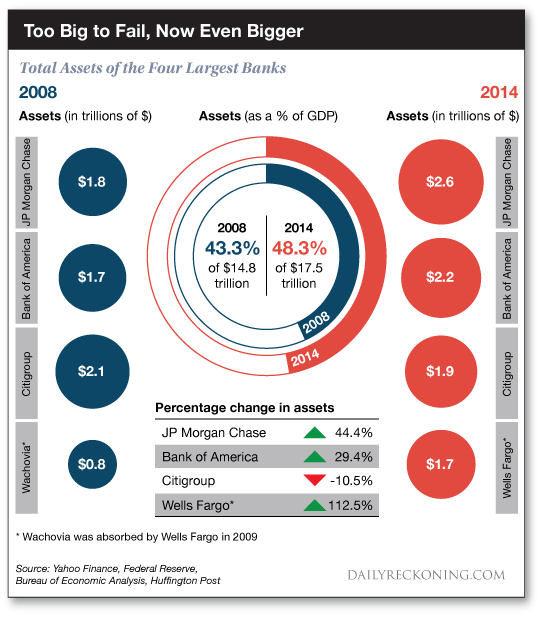 The Fed’s “fixation with the markets,” says Roach, now a senior fellow at Yale University, reiterated this year, “has created a deadly trap… Central banking has lost its way.” The bankers have failed to learn “the lessons… of what they put the world through a decade ago.”

It’s not a stretch to suggest having the entire financial system resting on a few mega-banks turns the global economy into a house of cards. One push and it all falls down. Especially if they’re relying on the wrong model to predict where financial markets are headed.

“After 10 years of research,” Jim summarizes. “I am a thought leader in the application of complexity theory to capital markets. So that’s my contribution. Not every system is complex. My watch is not complex. It’s not gonna turn into a butterfly and fly away. But a complex system might, all right? So my watch is complicated. But it’s not complex.

“A lot of people use those words interchangeably, but in science, they don’t mean the same thing. Complicated means it has a lot of moving parts. Complex means it has feedback loops, so the moving parts can decide to be something else. It’s called adaptive behavior.”

“You could do a complexity study on earthquakes, tidal waves, nuclear reactors and stock markets. But what we have with Fukushima are four complex systems, each with an individual cascade, cascading into each other.”

Jim’s not the only thinker trying to apply complexity theory to financial markets, but it’s a very short list. The real hard-shell complexity theorists have gone after biology, climate, earthquakes, forest fires, traffic patterns, cities — they’ve gone after a lot of other problems.

“If you say, ‘A nuclear reactor can melt down,’ everybody understands what that means. You don’t need a physics degree or an economics degree to get it. Three Mile Island. The China Syndrome. Fukushima. Nuclear reactors melt down. Well, you know what? There is no difference, mathematically or dynamically, between a reactor meltdown and a stock market meltdown. There is no difference.

“In the real world, if you put on a trade and you lose money, and you put it on again and lose money, you might not do it the third time. That’s adaptive behavior. Like you change your behavior, your approach to markets must change too.

“The complexity theorists haven’t gone after finance,” Jim says, “because they don’t have the financial chops. The few who have — and there are some — stumble because they’re brilliant physicists but they don’t really know capital markets that well. Because capital markets are a whole world unto themselves.”

When the next crisis hits the financial markets, a similar cascading event is all but predictable. Maybe Morgan Stanley will collapse… then Goldman Sachs… then Citibank close behind… then Bank of America and JPMorgan… until the whole system melts down.

With $3.55 trillion in toxic assets on their books already, will the Fed have enough baking soda on hand to neutralize the reaction? Jim takes a look at six areas where he thinks the Federal Reserve’s economic models are empirically wrong, below.

Tomorrow, as part of our ongoing effort to put Jim’s groundbreaking idea at your disposal, I’ll be unveiling a new opportunity for you. It’s not a newsletter… a book… a video… or anything else we’ve attempted.

But it will be worth your while to pay attention. The event is specifically designed to help you keep your family and your money safe when and if the “house of cards” comes tumbling down.