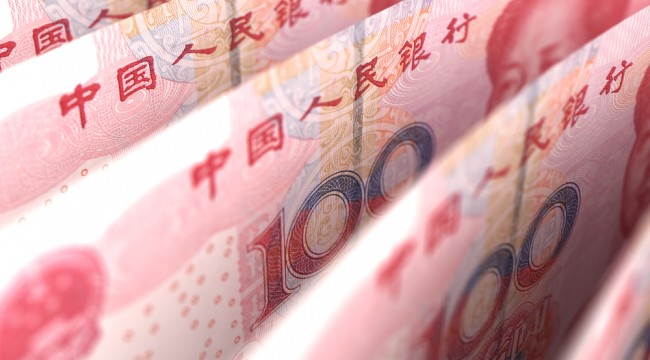 Whoops — did China already go too far with this devaluation thing?

China intervened to prop up the yuan Wednesday, according to people familiar with the matter, just a day after it had let it decline sharply, underscoring the tricky balancing act now facing its central bank: how to keep the country’s currency from free-falling.

Let’s backtrack a bit: Yesterday, as noted in The 5, the People’s Bank of China devalued the renminbi against the U.S. dollar by 2%. Today, the PBOC yanked it down another 1.6%. But then market forces took over and dragged it down still more in the currency markets.

And so with 15 minutes left in the Chinese trading day, the PBOC ordered state-owned banks to dump dollars to arrest the bleeding — if the Journal’s anonymous sources are to be believed, we hasten to add. The yuan jumped 1%. 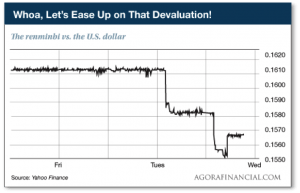 It’s as vivid a reminder as any: The miracle of China’s ascendance these last 35 years does not alter the fact that central planners run the joint… and they’re as vulnerable to the law of unintended consequences as central planners anywhere else on the globe.

So now what? The situation “could settle down,” writes EverBank’s Chuck Butler in today’s Daily Pfennig, “or it could be like a snowball rolling downhill, and become a bigger problem for the rest of the globe.”

And it might not even achieve the aims of Chinese leaders — propping up exports. “While the Chinese have attempted to diversify their economy,” Chuck says, “they still depend heavily on exports to fuel their economy, and exports dropped 8.3% last month… What does that tell you about the strength of the major economies around the world?

“I think that China is going to find out that devaluing their currency to make exports less expensive isn’t going to be the medicine to cure all that ails them… Look around the world… Everyone is doing it (debasing their currencies to promote exports), and no one is having a good time.”

“Understanding how U.S. and Chinese monetary policies are now joined at the hip, and what this means for the entire world, is the key to understanding the global slowdown affecting stocks, currencies, commodities and even the real value of cash,” says Jim Rickards.

Here in the United States, Fed chair Janet Yellen has committed to increasing the fed funds rate — sometime, pinky swear. But it’s all “data dependent,” as the saying goes. And none of the “Big Three” data points — unemployment, inflation or GDP — is meeting her stated criteria for a rate increase.

“Yellen has painted herself into a corner with no escape,” says Jim. “She’s talking tough on raising rates at a time when the U.S. economy is slowing. The tough talk makes the dollar stronger, which is deflationary. This pushes Yellen further away from her inflation goals.”

Meanwhile, China has maintained a loose peg to the dollar. That’s a condition of China’s eventual inclusion in the SDR — the “super currency” maintained by the International Monetary Fund.

“The problem with that is when you peg your currency to another country, you outsource your monetary policy to that other country’s central bank. If the Fed tightens (or even talks about it), China has to tighten to maintain the peg.”

Result: “Yellen has caused the U.S. and China to tighten policy at a time when both should be easing,” Jim says.

Sure, China devalued yesterday and today… “but the damage to its growth has already been done.

“Yellen may not understand what she is doing, but markets do. The deflationary dynamic caused by the Fed is showing up in the 1,000-point decline in the Dow Jones index in the past three months, 60% declines in many commodity prices and record plunges in emerging-market currencies from Brazil to Turkey and Malaysia.”

That’s “collateral damage” from the currency wars for you.