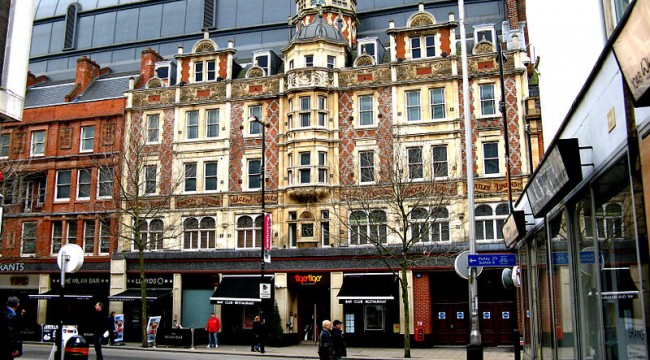 When Capitalism Turns To Cannibalism

As long as most startups crash and burn, and anyone with a few bucks and plenty of inner drive can start an enterprise, authentic capitalism still lives.

But let’s face it, authentic capitalism occupies a diminishing corner of the U.S. and global economies.

With a work force of 150 million and around 120 full-time workers, the U.S. economy has about 6 million small businesses with employees and a few million self-employed (sole proprietors) who earn a middle-class livelihood: Endangered Species: The Self-Employed Middle Class.

The political and financial influence of small business and the self-employed barely registers on K Street, Wall Street and in Washington D.C. Politicos praise small business in the same way they speak of small family farms as the backbone of American agriculture — as a form of pandering for PR purposes while they pocket the big campaign contributions from Monsanto and Big Ag.

Meanwhile, in the real world, small business is in decline while corporate money floods the financial sector and Washington D.C.

The Washington Post published a study that found U.S. businesses are being destroyed faster than they’re being created. While not exactly a surprise, this is sobering evidence that small enterprise is in structural decline: 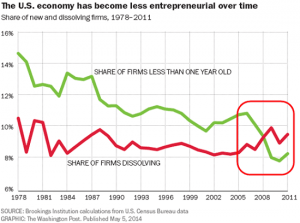 The 22.4 million with some self-employment income looks like a big number, but most earn a pittance: only a relative few earn what qualifies as a middle-class income, and 3 million of these are professional-sector corporations or partnerships: 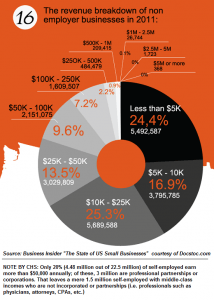 The real action in modern-day capitalism is finance capital: that’s where the really big money is made. You don’t make money making inexpensive autos, you make the big money selling subprime auto loans.

Corporations aren’t selling more products to boost their share prices–they’re buying back their shares as a way to push their stock price higher.

It has been estimated that the majority of corporate profits (presumably actual profits, as opposed to the tricked-up accounting games companies play to boost their announced earnings) have been spent buying back shares.

The modern banking system of the last few centuries has been based on lending to borrowers who do something productive with the capital — open a mine, start a factory, start a ranch, drill an oil well.

But this whole equation becomes unstuck when — because of a finite resource-constrained planet — there’s nowhere productive to invest it anymore.

That’s when finance capital becomes cannibalistic, as it has over the last few decades. That’s why the Greeks, for example, cannot grow themselves out of the debt pit — there’s no growth to be had.

This is why corporations are “investing” in their own shares — there’s no place left to invest for growth. They are cannibalizing the entire financial system, buying regulatory and tax favors from thoroughly corrupt political systems to secure their profits, which are then used to remove shares from the market, boosting the price-earnings ratio and the share price.

Insiders grant themselves immense chunks of newly stocks via options which they promptly cash in, reaping tens of millions in personal gains from the cannibalism.

Yes, authentic capitalism still exists, but it’s been relegated to the sideshow. The Big Tent with the Big Bucks is all finance/cartel/state/crony capitalism, and financialization is devouring all the other players.

With authentic growth scarce, there’s no other way to reap huge profits but cannibalism.