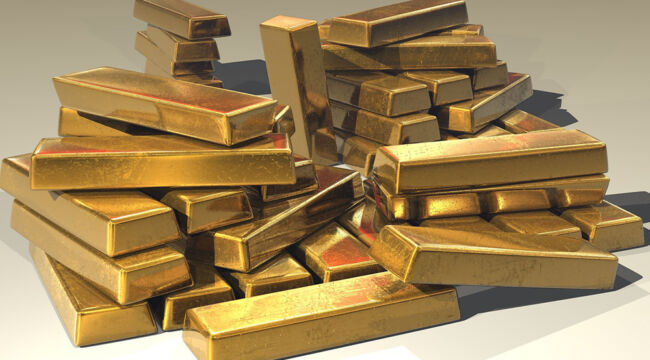 What — precisely — is amiss with gold?

Has the Midas metal… lost its Midas touch?

For 18 months the monetary and fiscal authorities have rampaged, banging along with all brakes off.

They have carried on at a gait truly astounding.

Meantime, inflation finally appears to be rubbing the sand from its eyes and stretching its legs.

And yet gold has wallowed, lolled and languished, despite all the money-spewing. Worse — gold has gone $150 backward this year.

And so once again the question: What is amiss with gold?

Or perhaps the reason is something else entirely. Have you taken your guess?

The answer you will have shortly. But first a look at Wall Street on this, September’s ides…

Green Everywhere, With One Exception

We find a fine, fine sea of green.

It was fair winds and following seas for Bitcoin today — up an invigorating $1,379 (at writing).

Yet amid our ocean of dazzling green, we chance upon a solitary red islet…

Once again, what is amiss with gold?

We take a natural shine to gold because it is a sound money. It is therefore an honest money.

And as we have stated before: Anything honest in this world of sin and vice is worth a defense.

“Gold Has the Public Spirit of a Tomcat”

As we have also written before, gold resists social uplift. The greater good is beyond its care. It lacks all human compassion.

Gold has the public spirit of a tomcat.

Paper money, fiat money, debasing money, this is the money for public service.

What — then — is wrong with gold? Why does it bob along in doldrums, lifeless, lacking all vigor?

Here again are the options:

Or perhaps the reason is something else entirely.

But we have run a trick on you, and sent you chasing after wild geese.

What is wrong with gold?

There is nothing wrong with gold.

What ails gold is the absence of fear. Mr. Roberts:

There is presently no “fear” present to drive investors into the psychological “safe haven” of gold. That lack of fear is evident in everything from:

You get the idea.

“The Bug Has Yet to Hit the Windshield”

Given that gold is no longer exchangeable for currency, and vice versa, the broken link as an inflation hedge remains. In today’s “fiat” currency economy, the ability to use gold as a method for transactions on a global scale remains destroyed. Therefore, gold has become a “fear trade” over concerns of the dollar’s demise, inflation and an economic reset.

While there are valid reasons to be concerned with such disastrous outcomes, those events can take decades to play out… the “bug has yet to hit the windshield.” Yes, it eventually will, but how much longer it will take is unknown.

“How much longer it will take” is of course the unknown variable, the x factor, the joker card, the question that is worth $64,000.

The answer is on the knees of the inscrutable gods.

When Investors Will Realize the Error of Their Ways

The specific date when the ‘bug hits the windshield’ eludes us, it is true. Yet here Lance Roberts hazards his own estimate… of sorts:

Is there anything wrong with gold? No.

However, as long as the Federal Reserve is engaged in inflating asset prices and forcing investors to take on excess risk, gold will likely continue to underperform.

Will that eventually change? Absolutely.

When? As soon as the market participants realize the error of their ways.

That is… as always… when it is too late…