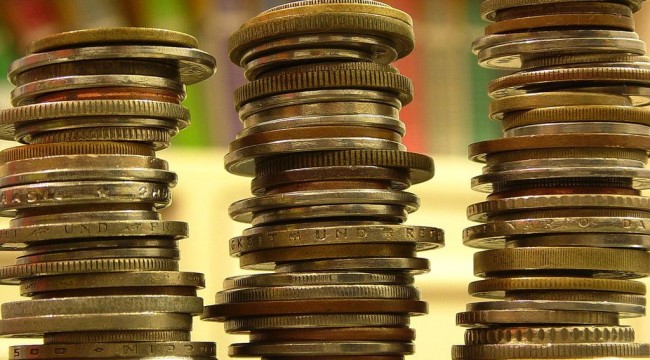 Somewhere in British Columbia – “Do Not Hump” says the sign on the side of the boxcar.

We had no idea why the Canadian Pacific Railway is putting its nose into our private lives. But the authorities are always trying to tell us what to do.

As you know, we’re making our way from Toronto to Vancouver by train. A quick summary of Canadian geography: The vast Eastern Forest gives way to the vast Western Prairie. And then you’re in the vast mountains.

The train chuffs along… hour after hour… day after day. Night after night.

The scenery is majestic. It is fascinating. It is endless.

We’ll return to our travel update in just a moment…

But first, let us check in with the markets… and continue telling you what we learned from George Gilder’s latest book.

We remind ourselves that we hold gold as a financial reserve, not an investment. Still, it doesn’t make us feel very good when it falls hard.

Gilder doesn’t make us feel very good either. First, he makes us work. He stretches from one dot to another. It can be hard to keep up with him. And he sometimes reaches too far.

The key insight in his latest book, Knowledge and Power: The Information Theory of Capitalism and How It Is Revolutionizing Our World, is that an economy is fundamentally a learning system, not a way for distributing wealth.

So far, so good. But Gilder has a sour side. He attacks our friends Nassim Taleb and David Stockman for reasons that seem trivial. He believes that neither fully appreciates his point.

Rothbard was sure that any government control over the economy would be a bad thing. Hayek was willing to imagine that a minimal state might help hold things together. Both counted on a “spontaneous order” – without government – to create a free, prosperous society.

A paradoxical “spontaneous order” troubles him. You can’t have both, he says – order and spontaneity. Then he makes the extravagant claim that “order requires political guidance.”

That is, of course, the point of Hayek’s paradox: Order doesn’t need guidance.

And especially not from politicians. When politics guides an economy, the results are always bad.

Gilder says so himself. Economies are built on information, not money, he says.

Money – even gold – has no real value except what the economy gives it. Imagine you are alone at the North Pole. You have no food. And no shelter. But you have an ounce of gold.

What is that gold worth?

This explains why adding to the money supply does nothing for the economy.

It’s the economy that gives money value, not the other way around.

This explains why zombies and cronies stifle the process of growth and wealth creation.

The trouble with zombies is that they don’t want to learn. Learning is hard. And costly. Zombies just want to take the fruits of someone else’s learning.

Likewise, cronies try to freeze the process of accumulating knowledge.

New knowledge – accumulated by others – is threatening. It is what causes disruption. And what economist Joseph Schumpeter called “creative destruction.”

Cronies fear this new knowledge and try to block it from ever happening – with subsidies, licensing requirements, and other regulatory impediments.

Gilder believes that this obstructionism is a bigger threat to prosperity than debt.

Information, says Gilder, is always surprising. It tells us things we didn’t know.

In an economy, the person who is the source of most important new information is the entrepreneur. He is the fellow who takes risks, builds a new business, and then – surprise, surprise – it works!

The cronies want to stop him, before he undermines the value of their old assets and old business models with new information.

The zombies want to drag him down, leeching on him so greedily that he runs out of energy.

But without the entrepreneur, capitalism fails.

Capitalism also fails when the information the entrepreneur relies upon is distorted.

When the feds fiddle with interest rates, for example, they turn the most important signal in capitalism into misleading noise. Gilder:

[I]nterest rates are noise, rather than signal. Interest rates near zero cause finance to hypertrophy, as privileged borrowers reinvest government funds in government securities.

Only a small portion of these funds goes to useful “infrastructure,” while the rest is burned off in consumption beyond our means.

Gilder believes the signals must move through channels – secured, but not corrupted – by government!

Yes, government exists. It is going to provide “channels” – laws, property protection, speed limits, and so forth – whether we like it or not. And it will be better for us all if it just keeps the channels open and free from twists and tolls.

But that is very different from providing “guidance.” Politicians don’t have the information or experience to provide guidance. They are zombies. They don’t want to learn the nitty-gritty details of real wealth building. They should just make sure basic laws – against murder, theft, and fraud – are enforced.

And otherwise butt out.

Meanwhile, back on the TransCanada…

The cities here are rich. An influx of immigrants, mostly from Asia, has boosted the energy and wealth of Toronto, Vancouver, and other large metropolises.

Property prices – especially in Vancouver – are among the highest in the world. The restaurants are among the best too. But outside the cities, you might just as well be in West Virginia or Alabama. There is little evidence of wealth or style.

Along the tracks of the TransCanada, which is our only reference, houses are modest – or even shabby. Neither agriculture nor forestry appear to be especially rich industries.

Particularly disappointing is the domestic architecture. Whether you are in the outer suburbs of Toronto… or out on the plains of Alberta… the style is the same: boxy, boring, and cheap.

In Ontario, stone and wood are abundant and almost free. But people still put up their houses with two-by-fours and vinyl siding – just like they do in West Virginia. These places must be as cold in the winter as they are charmless in the summer.

No attempt has been made to create a vernacular architecture appropriate to either the climate or the scenery.

We expected the landscape to be barren, with stunted pines growing on windswept tundra. But most of the land we see is almost lush – either with fields planted in wheat or rye… or thick timber.

Some places – especially the open country of Alberta – are particularly pretty. This time of year it looks like summertime in central France, with large fields of yellow or blue, depending on whether they were planted in canola or flax.

Everywhere you look is a stunning vista – either mountains, plains, or woods. But the local builders don’t seem to notice. The house goes up, wherever it is, as if it were in a New Jersey suburb.

“We have a friend whose brother moved to Saskatchewan to farm,” Elizabeth reminded us. “Do you remember?” We did not.

“Yes you do. He was Dutch. He and his wife left the Netherlands. They lived in Winnipeg. And he farmed some large fields outside the city.

“But we heard that they gave up. It was just too isolated and boring.”

Like the heartland of the U.S., there is little to do in these small prairie towns. Few restaurants. Few good liquor stores. No theater. No cultural attractions.

They wouldn’t appeal to everyone.

We are now winding our way through the mountains of British Columbia. As usual, the scenery is superb.

We sit in the dining car and our mouths drop open. The Thompson River… the Rainbow Canyon – Canada has some of the most spectacular natural beauty we have ever seen.

P.S. I originally posted this article at The Dairy of a Rogue Economist, right here.