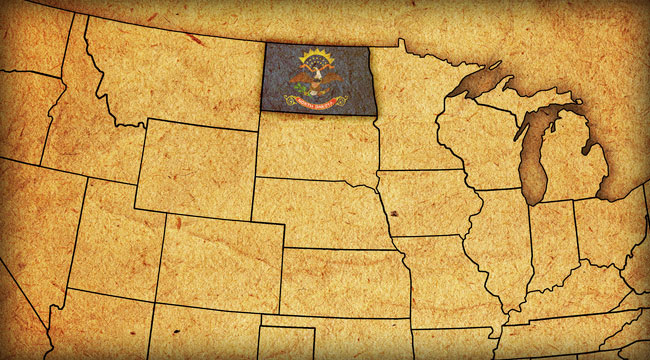 What the Experts Don't Know About America's Oil Boom

That was the final answer on the show Jeopardy! on May 6.

For those familiar with the prime-time game show, you know that after the answer is shown, the contestants have 30 seconds to come up with the right question.

Do you have your guess ready? Here’s that question once again, in the Jeopardy! colors: 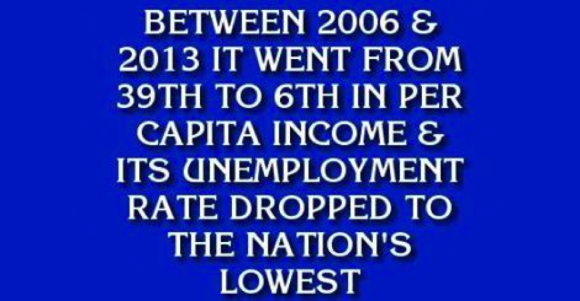 …and the correct response is:

“What is North Dakota?”

For longtime readers and those who’ve been paying attention to America’s energy renaissance, this question seems like child’s play. It’s a gimme!

Heck, was this the teen version of Jeopardy!?

In fact, it was NOT. This question appeared on the “Tournament of Champions” show – and it was the final question. Simply put, this “tough” question was asked to arguably the smartest folks Jeopardy! has to offer.

Naturally, you’d assume everyone got the answer correct, right?

I mean, with oil and natural gas flowing from North Dakota (of all places), it must be obvious that this flyover state was the correct response, right?

Whelp, here were the responses….

One guy wrote down Texas. A novel guess, since Texas has an oil boom of its own, but wrong.

One lady wrote down Arizona and then scratched it out and settled on Washington state. Not sure what she was thinking.

And one contestant did get the correct answer: North Dakota.

So what’s the point? Why bring up this game show trivia?

Simple. We’re over five years into America’s oil and gas turnaround and even the “champions” don’t know it! 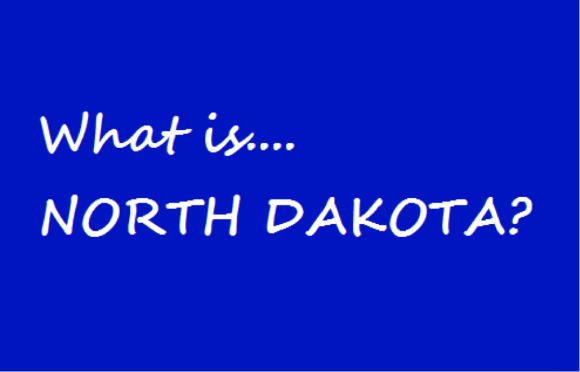 I love it when you stump the experts.

It’s a win for the little guy! It’s also an opportunity for investors like you!

Here’s a second anecdote for you…

Last month, I attended a global oil conference in London. The place was packed with the oil and gas upper crust — CEOs, economists, reporters, analysts, traders and more!

The great part about this conference across the pond is that instead of droves of people lurking about, hammering the experts with questions, there’s plenty of room to rub elbows with some of the smartest oilmen on the planet.

One conversation sticks out…

I spoke with one of the oil market’s leading economists. We talked about global shale moves, offshore oil and the future of America’s shale boom.

But at the end of the conversation, I asked a question: Why are a lot of people claiming that America’s shale production will follow a “peak” or bell curve? (For instance, here are some major forecast models:) 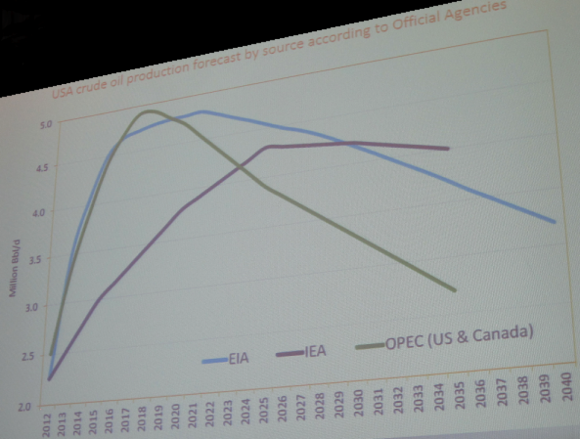 “From what I’m hearing, the shale boom is more of a manufacturing model, so won’t we see a long-term plateau of production?” I asked.

The oilman and economist didn’t have a direct answer. He nodded his head slightly and essentially agreed that it’s an interesting hypothesis.

Do you see the point?

One of the smartest economists in the oil and gas field doesn’t even know the right answer.

So you see, some experts (from Jeopardy!) are dead wrong. Others are still scratching their heads…

The way I see it, there’s still a massive amount of uncertainty in the U.S. shale market. And the only folks who know what’s really going on are the ones on the front lines of America’s oil and gas boom.

From what I’m seeing (as long as oil stays above, say, $80 a barrel), the U.S. shale boom will continue to go full-bore. And from what I’m hearing from well-run producers, they’ve got hundreds if not thousands of future well locations with their current acreage and technology.

That means decades of production. And it’s not a production “peak.” A production peak would happen in conventional oil. It would happen with “easy” oil — that is, if you’ve got a ton of wildcatters running around poking holes in the ground getting the easy oil out. That easy oil comes out rather quickly.

In today’s shale boom, there’s no “easy” oil. Every drill plan is calculated. Each barrel is manufactured. So I don’t see a sharp peak in America’s second oil boom. I see a plateau.

Add it all up and there’s still a lot of meat left on the bone in America’s second oil boom. And many experts are missing the mark. If my hunch is correct, we’ll have plenty of opportunities to profit in the short term while well-run drillers continue to prove their mettle (and analysts play catch-up).

Ed. Note: This essay was first featured in today’s Daily Reckoning email edition – along with a full analysis on the coming Iraq oil shock and its effect on gasoline prices. It’s just one of the many free perks of being subscriber to The DR. Sign up for FREE right here, and get a host of great benefits, including regular opportunities at real, actionable investment tips.