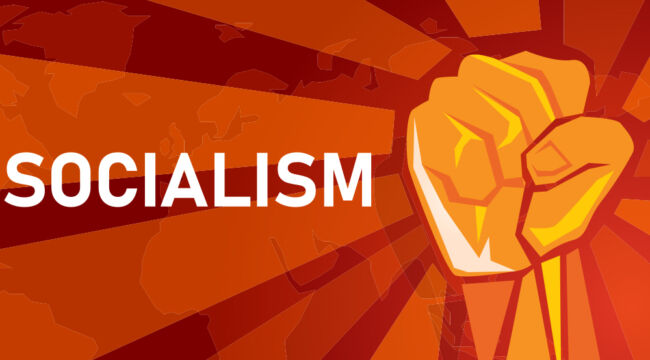 What if socialism “worked”? What if communism worked?

That is, what if collectivist economics outdid and outperformed free market capitalism… and Marx outshone and outflanked Smith?

Should the United States take collectivism aboard on pragmatic grounds of efficiency? Or should it beg off on abstract grounds of principle?

The United States erected itself, after all, upon the hard New England granite. Freedom and liberty formed her foundations.

Would today’s crop of Americans dynamite the bedrock for a mess of porridge and a chicken in each pot… if collectivist economics proved superior at delivering them?

Today we force ourselves to fundamental assumptions.

In each you will discover thundering defenses of free market capitalism. What unites them all?

Capitalism’s superior capacity to produce goods and shovel up wealth.

It simply does not work, maintains the free marketeer.

But you must take this man as you find him, says the Adam Smith disciple. Only when he is allowed his unobstructed pursuit of self-interest will he produce.

Stifle his ambitions and you stifle his productive energies.

Mr. Smith’s disciple would remind you of an old saw from the Soviet Union: “They pretend to pay us, and we pretend to work.”

The real man in the real world will decline the exchange. He will beg off.

Meantime, the free marketeer will argue that government-imposed price controls are economically lethal.

Because they overturn capitalism’s beautiful incentive structure, they result in goods shortages — and higher prices for the same items.

Imagine a socialist government wishes to reduce widget costs for its overburdened population.

It mandates that firms sell their widgets at a price-controlled $1 each. Yet these firms may only take a profit — and a modest profit — by selling them for $2 each.

Why would a business concern produce widgets at a loss? The question is of course the answer. It would not.

Now consumers must go almost entirely without their widgets. Why? Because the government has disincentivized their production.

Supply plummets, though demand remains. The widgets that do reach market may go for $3, or $4 — or more.

All because the government wished to reduce the cost of widgets to $1.

A Recipe for Unemployment

Relatedly, minimum wage requirements work at self-destructive purposes. They reduce employment because they compel employers to dole out wages in excess of the value a marginal employee provides.

Why would a McDonald’s pay an employee $15 the hour… when his workplace contributions justify only $8?

And so this poor, unskilled fellow must throw himself upon public relief. Or he may resort to unlawful activities in order to scratch by, further burdening the community through his crimes.

And so the free marketeer takes his pragmatic stance against minimum wage laws.

Here we list but some popular defenses of free market economics. And let it go into the record at once: We agree with them entirely.

We are with the free marketeers, and with them to the very last detail.

We are convinced beyond all convincing that free market capitalism is infinitely superior to the collectivist system.

We merely refer you to the Soviet example to fortify our case. Yet again we ask:

What if these collectivist economic doctrines “worked?” What if the sun rose tomorrow in the west, what if the polarities reversed, what if politicians stopped lying…

And what if collectivism outproduced capitalism?

“You’re All a Bunch of Socialists!”

The great “Austrian” school economist — Ludwig von Mises — once stormed from a meeting of economists who trumpeted the beauties of the free market.

They believed themselves close adherents of free market capitalism. At this gathering they were debating tax policy.

How could government collar the greatest tax revenue without distorting the free market?

As Mises lit out for the exit, Mises raged, “You’re all a bunch of socialists!”

How could he label a body of free market economists “socialists?” They were against price controls, minimum wage laws and the rest.

They were merely attempting to let Caesar have what is Caesar’s — while maintaining economic liberty.

To Mises, economists had a role in the political life of the nation. But it was not in making life easier for the state and the political class. It was not in becoming specialists in providing rationales for the expansion of state power…

The good economist is supposed to deliver uncomfortable truths that would likely make him unpopular to the political class. He was to explain to them how their high tax rates seriously damage the ability of entrepreneurs to make sound judgements about the future, how taxes prevent consumers from saving and investing for themselves, and how taxes hinder businessmen in serving consumers through innovative products and marketing. Moreover, a state receiving the maximum possible revenue would be an expansionist state that would never cease its interventions in the market…

Mises thought that economists who attempted to make this possible… were acting very much like the socialists of old. It was the socialists, after all… who first conceived of economics as a science in service to the state.

There Is No Free Market Economy

Of course, an authentic free market system has not existed within these shores for the better part of one century.

We endure instead what economics professors label a “mixed” economy. Yet in fairness, it lacks the extravagant interventions of the truly collectivist economy.

Of course we are heart and soul for free market capitalism, and declare openly for it

We are for free market capitalism for one central and simple reason: It is the economic system of a free people — an authentically free people.

We offer no higher defense.

Is efficiency a higher good than liberty itself?