“We’ve seen the lows in March and we will never see those lows again.”

So concludes Dr. Jeremy Siegel. Dr. Siegel is a finance professor at the superexcellent Wharton School of Business.

But why will we never see March lows again?

Is it because the economy has loads of latent energy packed in? That it will come snapping back when freed… like a coiled spring let go?

No. That is not the reason. What then is the reason? MarketWatch:

According to Siegel, unprecedented support for the economy by the Federal Reserve and the U.S. government make it nearly impossible for the stock market to revert to its late March lows.

What is more, the professor ladles out free investment advice. Fix your sights on 2021:

I think 2021 could be a boom year. With the liquidity that the Fed is adding — unprecedented — it could be a really good year.

It may well be a good year… and for the reason given.

But will 2021 be “a really good year” for the economy? We harbor the severest doubts…

Stuck in a Ditch

We hazard the economy will require years to climb from its current ditch.

Thousands and thousands of businesses — and their millions and millions of employees — may never come up.

Why should it work now?

For years we have hollered that the stock market was a false economic indicator. It could not stay up without generous central bank nurturing, we argued.

It insisted instead the stock market went along under its own steam, that it packed its own oomph. Look at unemployment, they would croon. Not in 50 years had it been so low.

No, the stock market merely reflected the rambunctious economy beneath it.

Yet now — with 33 million jobless and the stock market up 25% — even Wall Street’s loudest boosters must concede our point.

The Truth Comes Out

Since there is a robust Fed liquidity backstop and we do not know the depth or duration of the current economic downturn, spending any time looking at economic data releases or focusing on corporate earnings is a colossal waste of time.

For economic data, the signal-to-noise ratio is essentially zero, and for corporate earnings… results are meaningless… The item to focus on is the Fed and its direct support for the financial and nonfinancial [investment-grade] corporate sectors.

What is this but an admission? An admission that the Federal Reserve has set the stock market and the economy going in two separate directions?

“Wall Street Has Very Little to Do With Main Street”

The stock market — in theory — should fairly mirror the economy from which it springs.

It was never a perfect reflection. At times Wall Street might distort the image… as a funhouse mirror distorts the human image before it.

But now the image has nearly inverted.

“Wall Street has very little to do with Main Street,” affirms Joachim Klement of Liberum Capital…

BMO — a bank — has shoveled through the data. Its riddle-solvers have concluded that each dose of quantitative easing kicks less than the last.

QE has fed through to the real economy in a slower manner than previous QE campaigns… The expansionary policy thus far has mostly resulted in increased asset prices.

Here Zero Hedge deepens the diagnosis. QE1 and QE2 proved equal to purposes, they maintain. But the potion wore off with QE3:

As QE leads to a direct increase in bank reserves, only a fraction is translated into money supply growth, and thus potentially consumption and investment. QE1 was highly effective and an important factor behind pulling the economy out of recession. QE2 had a marginally lower but still high follow-through… We observe elevated inflation and personal consumption rates during the period of QE2 as evidence of its effectiveness. However, during Q3… [it] resulted in very little inflation of GDP growth. Through this lens, the impact of QE on the real economy has diminished over time.

“Hyperinflation for Asset Prices Even as the Broader Economy Collapses”

And now the Federal Reserve has inflated its balance sheet from a QE3 high of $4.5 trillion… to a truly fantastic $6.7 trillion.

It will likely swell to $10 trillion or higher.

Yet each dollar does less duty than the last. In conclusion:

The marginal utility of debt is collapsing, with ever more debt required to generate an increase in underlying GDP…

The marginal utility of every new QE is now declining to the point where soon virtually none of the money created by the Fed out of thin air will enter the economy and instead will be stuck in capital markets, resulting in hyperinflation for asset prices even as the broader economy collapses.

And so we confront a dangerous gap: 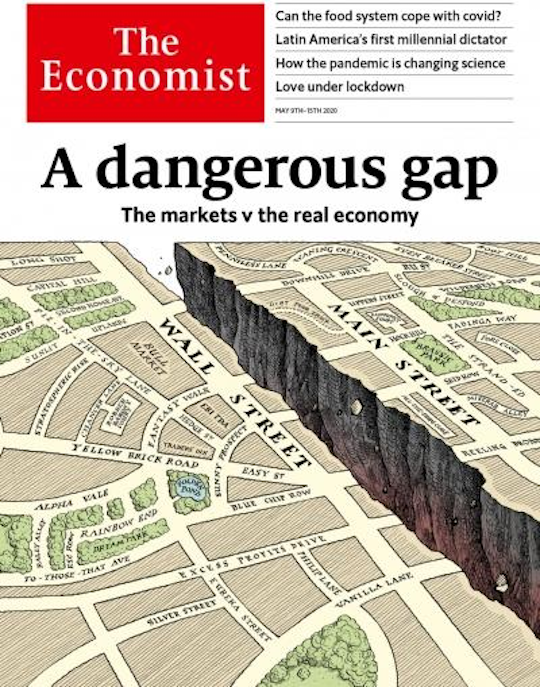 Will Main Street take another decade of scraps while Wall Street feasts?

The Federal Reserve’s economic medicine has proven a weak brew. This is why we are convinced monetary policy will give way to fiscal policy.

The federal government will shoot adrenaline directly into the bloodstream. That is, it will attempt to jolt the economic heart through spending.

But not even direct government spending may generate a beat…

All Buck, No Bang

The United States government borrowed some $12 trillion between the last financial crisis and last June.

The American economy expanded only $5.1 trillion across that frame. That is, GDP increased 35%. But the national debt rose 122%.

Pre-COVID-19, the Federal Reserve Bank of San Francisco estimated the “new normal” for economic growth would range between 1.5% and 1.75%.

Now the United States has entered a newer, more abnormal normal. It is an inverted normal of skyshooting debt… and shrinking growth.

This year’s budget deficit may run to $4.2 trillion. And GDP may shrivel 8%.

From what direction will the growth come in?

Each dollar of new debt yields under $1 of economic growth. Thus the Keynesian “multiplier” has taken up division… as we have written before.

What is more, much of today’s debt is unproductive. It goes to the service of “entitlements.”

That is, it holds no theoretical promise of return.

But it is too late to turn around. “Inflate or die,” as our co-founder Bill Bonner enjoys saying.

The authorities have chosen to inflate. We all may die regardless…