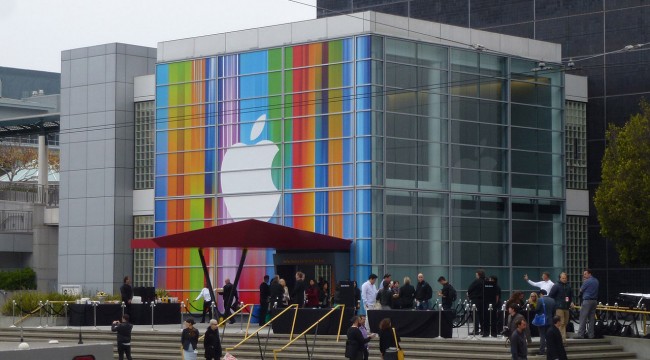 We Are Now All Prisoners of the Information Age

Somewhere in Northern Alberta – “The train will stop for 20 minutes to take on water,” said a voice over the loudspeaker.

We had been rolling for a day and a half. It would be nice to get out and stretch our legs. And so, we climbed down and wandered around town.

In about 10 minutes, we had seen all there was to see – just a few cheap houses, a convenience store, a post office, and a place that billed itself as the Château du Nord – a ramshackle blue house, built of wood that advertised itself as a place for “burgers and shakes.”

U.S. stocks fell yesterday. The news from the tech sector is bad.

IBM sales are down for the 13th straight quarter. Microsoft posted its largest quarterly loss ever on a big write-down related to its purchase of Nokia.

And Apple shares plunged 7% in late trading yesterday, following disappointing earnings forecasts. This wiped $50 billion off the market cap of the world’s most valuable company.

Taking a long ride on a passenger train must be like an ocean cruise. The difference is that we look at land, not water.

Once the TransCanada left the station in Toronto, and the delayed departure was behind us, the trip became very agreeable. The staff are friendly and competent. The accommodations are comfortable.

We read. We write. We eat. We drink. We settle down for days of quiet reflection – often out of cellphone range. And when we look out our window, we see trees… rocks… hills… rivers… lakes. And a few shabby houses.

Canada’s north – Le Grand Nord the French call it – is amazingly empty. Mostly what we see are trees. Maple. Birch. Spruce. Pine. The forests of Northern Ontario seem to have no end.

Heading north by northwest, the train rounded Lake Huron and then turned west. It has been lumbering and trundling west ever since, occasionally pulling off onto a sidling to let a freight train go by.

Our fellow travelers are a mixed crew. One group – which includes a Chinese woman – speaks Spanish. One of the Spanish speakers – from Lima, Peru – ducked our question when we asked what he was up to.

But he asked our opinion on America’s economic recovery.

“What recovery?” we replied.

A tall, elegant African woman is a mystery. There are a few lost souls. One retired man won’t stop talking; the other passengers are learning to avoid him.

At the upper end – which is at the very back of the train – are a few retired couples from south of the 49th parallel.

By no means statistically significant, half of these high-end customers come from Washington, D.C., and have earned their money from the Pentagon.

Most have some reason to go to Vancouver, as we do, and thought the train would be an interesting way to get there.

Yesterday, we joined them to celebrate an 80th birthday. They formed a jolly group – joking, laughing. Generally, our fellow voyagers seem to enjoy each other’s company and spend much of their time together in the club car.

One of the books we brought with us to contemplate was George Gilder’s Knowledge and Power: The Information Theory of Capitalism and How It Is Revolutionizing Our World.

We made fun of Gilder – President Reagan’s most quoted living author – years ago in one or our books.

He had gotten a little moonstruck in the lunatic glow of the dot-com boom in the late 1990s. Like many of that era, he came to believe that information is more important than matter.

Maybe it is in some sense. But never have we sprained an ankle by stepping on an idea. And when 6 o’clock comes, we do not sit down and uncork a thought.

In the late 1990s, more and cheaper information was thought to be the ticket to faster economic growth. Gilder believes that information trumps physics, removing the age-old constraints – time, energy, and resources – that hold back progress.

“In the beginning was the word,” he writes, echoing an earlier bestseller. The word is what makes the thing, not the other way around, he points out.

Most of the words we hear are noise. Most of the ideas they convey are superficial piffle. They don’t create wealth or beauty. They get in the way; they confuse; they fill up the cupboards and trash bags of the mind.

Then they must be dumped somewhere – blemishing our mental landscape, like the slagheaps of the Industrial Age, for many years.

And since it’s been more than half a century since Claude Shannon discovered the principles of information theory… and almost two decades since the debut of the World Wide Web… we look around and wonder: Where’s the beef?

You can get any word you want on the Web – for free.

But we don’t see how they make us better off. We don’t see wealth or prosperity – except in the industries that own the pipes through which these words are transmitted.

Google, Apple, and Facebook are building new mega-rich campuses to celebrate their success. But the average man in America saw his wages, in inflation-adjusted terms, peak in the 1970s.

Now he can distract himself from his misery with cheap entertainment from Silicon Valley. But he can’t support a family.

All we see are time-wasters. Most people use the new devices for entertainment; they become less productive thanks to the time they spend browsing dating apps or talking to their refrigerators.

We work with words and ideas. The electronic media – with so many ideas and so much information so readily available – has turned us into miners rushing to Sutter’s Mill.

We have to dig into every hillside, crack open every rock, and send every grain of river-bottom sand through our sluice. We don’t know where the gold is; it could be anywhere.

The iPhone sends more and more money to Apple. To us it brings more information – to be processed, to be studied, to be stuck in some mental file… thence forgotten… lost forever.

Standing in line… in an elevator… in a taxi… waiting for dinner – no minute is spared, neither in thought nor reflection. Instead, every message demands attention – immediately!

Yes? No? What do you think? What should you think? Is this important or more time-wasting drivel?

Why not just turn the damn iPhone off? Why not dispense with the additional information? Why not “just say no” to more ideas?

The answer is simple and obvious: We are now prisoners of the Information Age. We can’t say no because we don’t know what we are saying no to.

Are we saying no to more noise? Or to “The Word”?

Ah, yes, that is where we have come to. Now that information is available, we can’t resist it.

And yet, judged by U.S. GDP, wages, or our own experience, it is a dud.

P.S. I originally posted this article at The Dairy of a Rogue Economist,right here.