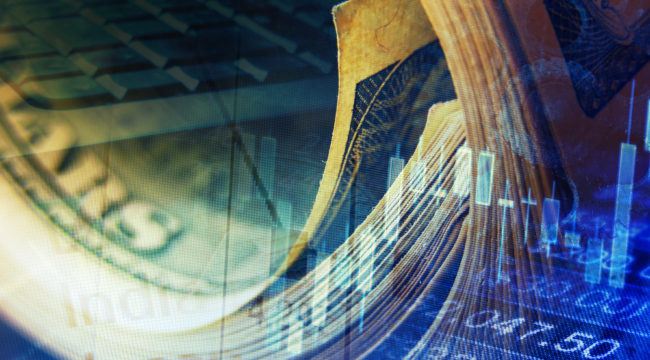 Despite Friday’s phony-baloney jobs report, goods-producing jobs have been shrinking again  during the last seven months, even as the next recession knocks on the door.

These manufacturing, construction and energy/mining jobs are the highest paying in the U.S. economy and average about $56,000 per year in cash wages. Yet it appears that the 30-year pattern of lower lows and lower highs with each business cycle is playing out once again.

So even as the broadest measure of the stock market — the Wilshire 5000 — stands at 11X  its 1989 level, there are actually 20% fewer goods-producing jobs in the U.S. than there were way back then.

Why? The short answer is that Alan Greenspan made a giant policy mistake 25 years ago that has left main street households buried in debt and stranded with a simultaneous plague of stagnant real incomes and uncompetitively high nominal wages.

It happened because at the time that Mr. Deng launched China’s great mercantilist export machine during the early 1990s, Alan Greenspan was more interested in being the toast of Washington than he was in adhering to his lifelong convictions about the requisites of sound money.

He apparently checked his gold standard monetary principles in the cloak room when he entered the Eccles Building in August 1987. Not only did he never reclaim the check, but, instead, embraced the self-serving institutional anti-deflationism of the central bank.

This drastic betrayal and error resulted in a lethal cocktail of free trade and what amounted to free money.

It resulted in the hollowing-out of the American economy because it prevented American capitalism from adjusting to the tsunami of cheap manufactured goods coming out of China and its east Asian supply chain.

What would have happened in response to the so-called “China price” under a regime of sound money in the U.S.?

Sound money would have led to falling consumer prices, high interest rates and an upsurge of household savings in response to strong rewards for deferring current consumption. From that enhanced flow of honest domestic savings, the supply side of the American economy could have been rebuilt with capital and technology designed to shrink costs and boost productivity.

The Fed’s Keynesian economists and their Wall Street megaphones have a vested interest in perpetuating inflation. It gives inflation-targeting central bankers the pretext for massive intrusion in the financial markets and Wall Street speculators endless bubble finance windfalls.

The double-talking Greenspan actually bragged about his prowess in generating something he called “disinflation”. But that’s a weasel word. What he meant, in fact, was that the purchasing power of increasingly higher (and therefore increasingly more uncompetitive) nominal American wages was being reduced slightly less rapidly than it had been in the 1980s.

Still, the consumer price level has more than doubled since 1987, meaning that prices of goods and services have risen at 2.5% per year on average even by the Bureau of Labor Statistics’ (BLS) downwardly biased reckoning. Notwithstanding all the Fed’s talk about “low-flation” and undershooting its phony 2.00% target, American workers have had to push their nominal wages higher and higher just to keep up with the cost of living.

But in a free trade economy the wage-price inflation treadmill of the Greenspan Fed was catastrophic. It drove a wider and wider wedge between U.S. wage rates and the source of goods and services in the global economy.

That is, U.S. production of manufactured goods was originally off-shored. But with the passage of time and spread of the central bank-driven global credit boom, other goods and services were off-shored to emerging markets (EM).

At the end of the day, it was the Greenspan Fed which hollowed out the American economy. Without the massive and continuous inflation it injected into the U.S. economy represented by the 120% rise in domestic prices since 1987, nominal wages would have been far lower, and on the margin far more competitive with the off-shore.

That’s because there is a significant cost per labor hour premium for off-shoring. The 12,000 mile supply pipeline gives rise to heavy transportation charges, logistics control and complexity, increased inventory carry in the supply chain, quality control and reputation protection expenses, lower average productivity per worker, product delivery and interruption risk and much more.

In a sound money economy of falling nominal wages and even more rapidly falling consumer prices, American workers would have had a fighting chance to remain competitive, given this significant off-shoring premium.

But the demand-side Keynesians running policy at the Fed and U.S. Treasury didn’t even notice that their wage and price inflation policy functioned to override the off-shoring premium, and to thereby send American production and jobs fleeing abroad.

Indeed, they actually managed to twist this heavy outflow of goods and services production into what they claimed to be an economic welfare gain in the form of higher corporate profits and lower consumer costs.

Needless to say, the basic law of economics — Say’s Law of Supply — says societal welfare and wealth arise from production; spending and demand follow output and income. By contrast, our Keynesian central bankers claim prosperity flows from spending. So they had a ready (but phony) solution for the gap in household consumer spending that initially resulted when jobs and incomes were sent off-shore.

The de facto solution of the Greenspan Fed was to supplant the organic spending power of lost production and wages with the appearance of demand issuing from an immense and continuous run-up of household debt. Accordingly, what had been a steady 75-80% ratio of household debt to wage and salary income before 1980 erupted to 220% by the time of Peak Debt in 2007.

The connection between household debt inflation and the explosion of Chinese imports is hard to miss. Today, monthly Chinese imports are 75X larger than they were when Greenspan took office in August 1987.

At the same time, American households have buried themselves in debt, which has rising from $2.7 trillion or about 80% of wage and salary income to $14.3 trillion. Even after the financial crisis and supposed resulting deleveraging, the household leverage ratio is still in the nosebleed section of history at 180% of wage and salary earnings.

Stated differently, had the household leverage ratio not been levitated in nearly parabolic fashion, total household debt at the time of the financial crisis would have been $6 trillion, not $14 trillion.

In effect, the inflationary policies of the Greenspan Fed and its successors created a giant hole in the supply side of the U.S. economy, and then filled it with $8 trillion of debt which remains an albatross on the main street economy to this day.

Then again, digging holes and refilling them is the essence of Keynesian economics.

At the end of the day, the only policy compatible with Greenspan’s inflationary monetary regime was reversion to completely managed trade and a shift to historically high tariffs on imported goods and services.

That would have dramatically slowed the off-shoring of production, and actually also would have remained faithful to the Great Thinker’s economics. After all, in 1931 Keynes turned into a vocal protectionist and even wrote an ode to the virtues of “homespun goods”.

But inflation in one country behind protective trade barriers doesn’t work either, as was demonstrated during the inflationary spiral of the late 1960s and 1970s. That’s because in a closed economy, easy money does lead to a spiral of rising domestic wages and prices owing to too much credit based spending. And this spiral eventually soars out of control in the absence of the discipline imposed by lower-priced foreign goods and services.

In perverse fashion, therefore, the Greenspan Fed operated a bread and circuses economy. Unlimited imports massively displaced domestic production and incomes — even as they imposed an upper boundary on consumer prices.

The offshoring of production and other services, in effect, throttled domestic inflation and prevented a runaway inflationary spiral. The ever increasing debt-funded U.S. household demand for goods and services, therefore, was channeled into import purchases which drew upon virtually unlimited labor and production supply available from the rice paddies and agricultural villages of the EM.

In a word, the Fed’s monetary inflation was exported.

Free trade also permitted many companies to fatten their profits by exploiting the wedge between Greenspan’s inflated wages in the U.S. and the rice paddy wages of the EM. Indeed, the alliance of the Business Roundtable, the Keynesian Fed and Wall Street speculators on behalf of free money and free trade is one of history’s most destructive arrangements of convenience.

Consider: During the 29 years since Greenspan took office, the nominal wages of domestic production workers have soared, rising from $9.22 per hour in August 1987 to $21.26 per hour at present. It was this 2.3X leap in nominal wages, of course, that sent jobs packing for China, India and the EM.

At the same time, the inflation-adjusted wages of domestic workers who did retain their jobs went nowhere at all. That’s right. There were tens of millions of jobs off-shored, but in constant dollars of purchasing power, the average production worker wage of $383 per week in mid-1987 has ended up at $380 per week 29 years later.

During the span of that 29 year period the Fed’s balance sheet grew from $200 billion to $4.5 trillion. That’s a 23X gain during less than an average working lifetime. Greenspan claimed he was the nation’s savior for getting the consumer price index (CPI) inflation rate down to around 2% during his tenure. And Bernanke and Yellen have postured as would be saviors owing to their strenuous money pumping efforts to keep it from failing the target from below.

But 2% inflation is a fundamental Keynesian fallacy, and the massive central bank balance sheet explosion which fueled it is the greatest monetary travesty in history. Dunderheads like Bernanke and Yellen say 2% inflation is just fine because under their benign monetary management everything comes out in the wash at the end — wages, prices, rents, profits, living costs and indexed social benefits all march higher together with tolerable leads and lags.

Jobs in their millions march away to the off-shore world when nominal wages double and the purchasing power of the dollar is cut in half over 29 years. These academic fools apparently believe they live in Keynes’ imaginary homespun economy of 1931!

The evident economic distress in the flyover zone of America and the Trump voters now arising from it in their tens of millions are telling establishment policy makers that they are full of it:

That they have had enough of the toxic combination of free trade and free money.