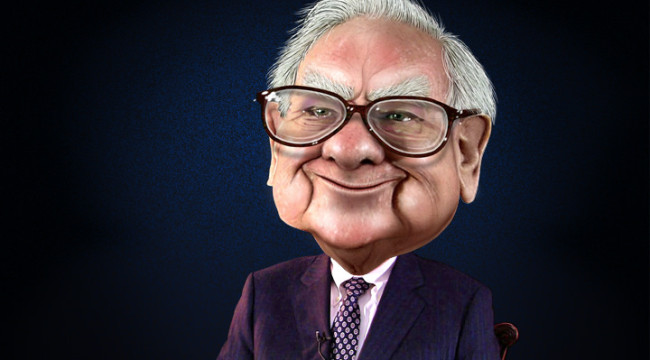 He spilled the beans on something he’s been doing quietly behind-the-scenes for years.

I’ve written about this in my books…

And now, after all these years, he’s finally confessed.

It’s a revelation that goes against all you’ve been led to believe about his extraordinary investment success.

And once I share it with you, it will change everything you think you know about the Oracle of Omaha…

The Cult of Buffett

For decades, the investing masses – led by a sycophantic media – have worshipped at the altar of Mr. Buffett.

You can fill a library with the adulatory articles and books that have been written about him.

The New York Times bestseller list has been littered with fawning titles like “The Tao of Warren Buffett: Warren Buffett’s Words of Wisdom” and “The Warren Buffett Way: Investment Strategies of the World’s Greatest Investor.”

The financial media hangs on his every word.

The theory goes you buy solid, undervalued companies and hold them for the long haul.

Buy stocks you would want to hold if the market were to close for 10 years… and just forget about them.

If you do, the logic goes, you’ll come out ahead in the end… no matter what bumps in the road you hit in between… just like Warren.

Millions of unsuspecting investors believe that’s been the key to the Oracle’s remarkable success.

But while Buffett’s been advocating that basic ethos for decades, in practice, his actual investing strategy is quite a bit different.

You know those market gyrations that “buy and hold” investors are told to ignore?

The ones that can decimate the value of your portfolio and take years to recover from… if you even recover?

Well, it turns out Warren protects Berkshire’s portfolio against those gyrations.

You see, the guy who’s positioned as the “buy and hold forever” guru has routinely traded serious size in currencies… like he’s doing right now.

At the meeting, Buffett revealed he regularly uses derivatives to make his money, the same instruments he once called “weapons of mass destruction.”

That’s how Berkshire routinely hedges its exposure in the foreign exchange market, for example.

But trading in currencies and derivatives is quite different and far more complex than the basic “buy and hold” that’s credited with making Buffett and Berkshire such a spectacular success.

Buffett sure does “buy and hold”… but he also uses complex transactions to hedge his portfolio when markets move against him.

Some of the derivatives he uses go far beyond hedging. Some are so complex you would need a math Ph.D. to decipher them.

That’s not something he talks about often.

And it’s something most “mom and pop” value investors following his lead don’t know anything about.

Sadly, that’s resulted in billions in losses for investors who’ve been simply holding through the Fed-created market busts.

At the meeting, Buffett also revealed he’s long the euro because Berkshire does a lot of business in Europe.

And I think we should follow his footsteps and buy the euro as well.

Don’t get me wrong.

I’m not blindly following Buffett’s decision to buy euros. I couldn’t care less about what he’s doing at any given time.

Instead, I’m simply following my trend following system, which is telling me now is a good time to buy CurrencyShares Euro ETF (NYSE:FXE).

See how easy that is? FXE’s price trend is moving higher, so it’s a good tactic to jump on board and ride it up (with a stop in place, of course).

You can limit your downside risk by placing a stop-loss at $106.75.

And unlike “buy and hold,” when the trend changes direction, we have our stops for peace of mind.

Just don’t expect to hear my view from the media clapping seals. My contrarian take complicates the folksy Buffett cult narrative loved by so many.

Don’t get me wrong: I salute Buffett, a great American success. His track record is unparalleled.

But “mom and pop” investors would be far better off if they know the truth about their media-created hero.

I just wish the man himself would spend more time debunking his own myths.

Then again, that’s my job.

Please send your Buffett feedback to coveluncensored@agorafinancial.com. I want your thoughts on today’s controversial issue.

Today, Jody Chudley unveils one airline trading at a fraction to its peers, and why one investing legend has already taken a stake…