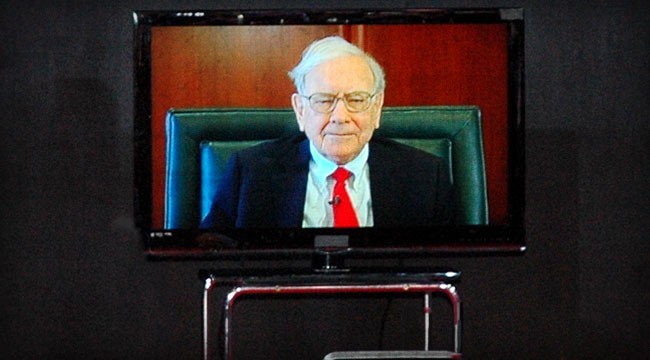 A Warning from Warren Buffett

Warren Buffett is the greatest investing mind of our time. At age 84, he is certainly also one of the most experienced. So, when the “Oracle of Omaha” has something to say, I listen.

Last week, he said something very important. Something that I would like to pass along to you.

Buffett indicated that there is one investment that he under no circumstance would be interested in owning. I’m talking about an asset that Buffett warns could be worth 60 cents on the dollar. I’m afraid many investors actually view this asset as the safest place to invest their money.

I’ll get to the asset Buffett was referring to in a moment. First, I’d like to explain why I think listening to him is so important.

It is sage advice (not surprising, considering the source). If over your investing career you avoid making any major errors, it is inevitable that your investment returns will be more than satisfactory.

Buffett has a “defense first” approach. His first rule of investing is “Don’t lose money.”

By paying attention to what world-class investors like Buffett are saying about areas to avoid, the rest of us can often avoid a lot of pain.

Back in the late ’90s, Buffett and many of his value investing colleagues were regularly warning of the dangers of owning highflying technology stocks. We found out why when the market crashed in 2000-2002.

In the years leading up to the 2008 financial crisis, there were voices of respected investors like Jim Grant, Jeremy Grantham and Prem Watsa urging investors to get out of equities, and especially anything tied to the real estate market. Oh, how we all should have listened.

My point is that as investors, you and I need to listen to what proven, successful and experienced investors are saying. These folks may not get the exact timing right, but they know what they are talking about when it comes to spotting dangerous places to invest your money.

They are often early in their warnings, but they are seldom wrong.

Last week, Buffett issued a warning that we should all pay attention to. While being interviewed, Buffett indicated that the last asset he would want to buy is the 30-year U.S. Treasury bond. When pushed further on the issue, he then expressed his conviction about this by saying that he wouldn’t even want to own a 10-day Treasury bond (if one should exist).

Buffett’s comments were interesting, to say the least. U.S. Treasury bonds are the first place investors immediately flee to when they start to get nervous. Treasuries are thought by many to be the safest place to invest cash.

Buffett has a very different view of how safe Treasuries are.

You can hardly blame investors for thinking that Treasuries are rock solid. For an entire generation of investors, all we have ever seen are declining interest rates. The chart below shows the yield on the 10-year U.S. Treasury. It has been in a steady decline since the early 1980s. 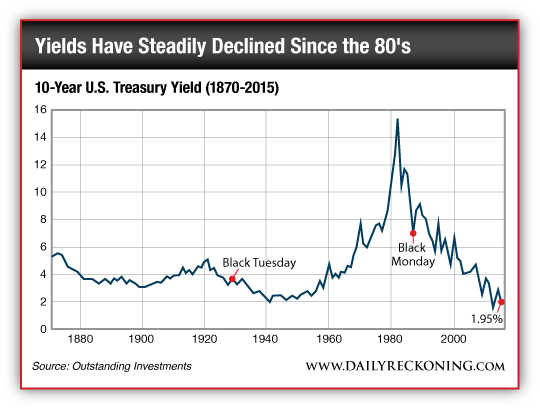 In his interview last week, Buffett said that he thinks there is a good chance — not a certainty, but a good chance — that the 30-year U.S. Treasury, which currently carries a 2.5% yield, could trade at 60 cents on the dollar at some point in the near future if interest rates start to rise.

Pay attention to number he is quoting. Buffett is saying that holders of the U.S. government-issued 30-year Treasury could lose 40% of their initial investment if they needed to sell (note that I’ve included an example of the relationship between bond prices and interest rates at the end of this article).

This isn’t some talking head on CNBC looking to make a headline. This is Warren Buffett saying this.

Buffett isn’t saying that this happening is a sure thing, but he did say that there is a good chance of it happening. My question to you would be is it worth the risk of exposing yourself to this kind of loss when the reward is a guaranteed interest rate of only 2.5% on the 30-year and even less on shorter-duration bonds.

Respected market observer Jim Grant has taken to saying that these days Treasuries offer “return-free risk.” I think he has nailed it pretty well. Your upside is minimal, your downside significant.

And over time, high-quality companies tend to increase those dividend payments. You can be certain that the U.S. government isn’t going to increase the amount of interest it pays you after you have purchased its debt.