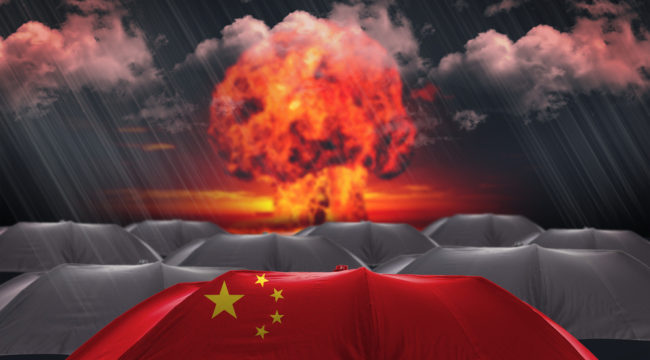 War with China Could Break Out in the South China Sea

[Ed. Note: Jim Rickards latest New York Times best seller, The Road to Ruin: The Global Elites’ Secret Plan for the Next Financial Crisis (claim your free copy here) transcends politics and the media to prepare you for the next crisis]

History shows that many wars begin not by design but by accident. World War One is the classic case study…

No one really wanted a world war. And 16 million people died as a result. The Ottoman, Russian, German and Austro-Hungarian empires all collapsed in the aftermath. Still, the war happened anyway through miscalculation and misreading the intentions of the other side.

Today the U.S. and China are confronting each other in the South China Sea the way Germany and Russia confronted each other just before World War One. Could another world war happen by accident?

The answer is yes, it could.

The South China Sea is rich in natural resources. It has rich fishing grounds and as much as $5 trillion in oil and gas.

But apart from its fisheries and vast energy resources, the South China Sea is home to some of the most important sea routes in the world. A third of all the world’s seagoing trade, and roughly $5 trillion worth of goods transit through South China Sea each year.

Without access to the strait, China’s access to oil and other raw materials from the Middle East and Africa would become greatly reduced. In wargames, American ships and bombers have rehearsed blockading the Malacca Strait. Chinese leaders are well aware of the implications and have watched these wargames with alarm.

China has now essentially claimed the entire South China Sea for itself (except for small zones immediately adjacent to the surrounding nations). But its control is disputed by six countries – China, Vietnam, Philippines, Malaysia, Brunei and Taiwan, all of which lay claim to some portion of it.

Of course, Chinese assertiveness in the South China Sea is nothing new. China has claimed territorial rights to almost the entire South China Sea in defiance of international arbitration and the competing claims of the other nations.

China has been backing up its claims by dredging the ocean floor to create artificial “islands” on existing rocks and atolls. Then it’s built military bases on those islands and threatened to interdict any fishing or commerce which it does not approve.

Control of the South China Sea would be a sensitive subject at the best of times, but now it is more of a tinderbox than ever.

Lately, the seriousness of the confrontation has been dialed up.

The U.S. has conducted freedom of navigation patrols in the area by sea and air. Numerous incidents have occurred between China and other claimants involving fishing and coast guard vessels in accidental collisions and intentional boardings.

China also seized a U.S. underwater surveillance drone and has been conducting strategic bomber overflights in the area.

Some of this is in response to comments by President-elect Trump about China’s currency manipulation and unfair trade practices and the suggestion that the U.S. “One China” policy may be up for review.

Soon after his election, Trump received a congratulatory phone call from the president of Taiwan. That might seem like a routine courtesy, but not from the Communist Chinese perspective.

But from the Chinese perspective, the Taiwan issue is nonnegotiable. Beijing insists Taiwan is a “breakaway province” and not a separate country. U.S. politicians usually tiptoe around this issue, but not Trump. He not only chatted with Taiwan’s president, but he questioned the U.S. “One China” policy in a tweet.

Trump’s actions set off alarms in Beijing. The Communist leadership decided to send Trump a message by stealing the underwater drone operating in Philippine waters, nowhere near the disputed South China Sea waters claimed by China.

The drone was later returned, (after Trump tweeted that the Chinese should “keep it”), but the point was made. In short, geopolitical tensions between China and the U.S. are definitely on the rise.

What about the future?

The indications for that are not good. In his confirmation hearing for secretary of state, Trump’s nominee, Rex Tillerson, said that China should be denied access to the artificial islands they created in the South China Sea.

Attempting to deny China access by a blockade or other means would be tantamount to an act of war. China fired back immediately. A leading Communist Chinese publication said, “Unless Washington plans to wage a large-scale war in the South China Sea, any other approaches to prevent China access to the islands will be foolish.”

President Xi of China is on the world stage at the Davos World Economic Forum this week even as Donald Trump is about to be sworn in as 45th president of the United States. We are certain to hear more on this topic soon from both leaders.

But Trump’s not even president yet. That won’t happen for a few more days. Imagine how much worse this could get once Trump takes office and his policy suggestions become reality.

The prospects for peaceful resolution are not good. This volatile mix of disputed claims, natural resources and complex treaty networks has the ingredients needed to escalate into a Third World War.

All it would take to start a war is some spark such as a collision at sea or an attack based on mistaken identity or misunderstood intentions. For example, an accidental collision at night between a Philippines’ naval vessel and a Chinese fishing boat resulting in Chinese casualties has the potential to start the next world war. Now, I’m not saying it necessarily would, but the potential exists.

So in addition to trade wars and currency wars, China and the U.S. could soon find themselves in a shooting war in the South China Sea.

Of course, the implications of this for markets are nothing short of catastrophic. But the serious potential for a shooting war in the South China Sea has largely being ignored by markets.

World Wars often emerge in unexpected places or on thin pretexts. The same could happen here. In fact, a war there is probably just a matter of time.

The entire situation is a tinderbox waiting to explode.