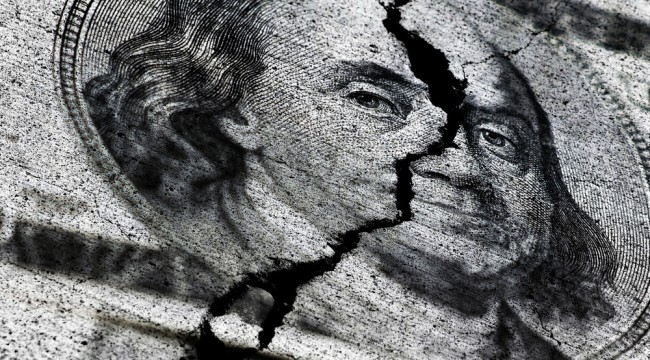 Voting With Your Feet

Editor’s Note: this article is a part of a series — if you haven’t read part one or part two, make sure you do.

When do we finally accept the hopelessness of reforming a self-serving machine bent on destruction?

Today’s topic is Vote with your feet.

The beauty of voting with your feet is the advice applies to the full spectrum of human experience. When faced with a dysfunctional, destructive situation that cannot be reformed, the only real solution is to exit stage left or right.

Voting with your feet often feels like admitting defeat or abandoning those trapped in a deteriorating situation. But we can’t help anyone if we are in danger of losing our life, health, mind, livelihood or opportunity.

Unfortunately, dysfunctional, destructive relationships and systems soon degrade to unhealthy states of co-dependency and complicity. We can’t leave the alcoholic because they need us to survive (and to play along while they “hide” the liquor bottles).

We can’t leave the dead-end city/county because our family is rooted there.

And so on. So we waste our time and energy trying to reform the alcoholic, make the toxic workplace slightly less toxic and pound away at the bleak prospects in the dead-end city/county, even though we know (and so does everyone else) that our abilities and ambitions are being squandered.

For many people, their nation of birth is a dead-end. Never mind the countries torn apart by civil strife and open warfare; there are plenty of places where opportunity is reserved for the children of elites.

Many people feel America is slipping into a dangerous state of totalitarianism masked by a phony veneer of wealth always wins democracy and various toxic flavors of crony-state capitalism that protect the privileges of the few at the expense of the many.

Sometimes the only way to reform a relationship, family, town, company or political system is to vote with your feet.

When everyone who values their autonomy, freedom of movement and opportunity opts out, a Darwinian selection process leaves behind those who are acting out of humanity’s least productive traits–guilt, complicity, fear of  change and love of comfort. The resulting collapse clears away the accumulated deadwood and enables real reform.

There is often an institutional lifecycle at work. When the institution was founded, it was staffed by idealistic go-getters who believed in the mission and paid little attention to pay, pensions and perquisites.

But as the institution matured, the majority of workers were no long idealists; they were people seeking to minimize their workload and maximize their private gains by whatever means were available.

The focus shifts from the mission to maximizing one’s share of the swag. Those with a higher purpose either quit in disgust or are banished to bureaucratic Siberia as threats to the free-loaders and stiffs.

Eventually, the friction, waste and sloth builds up and the institution collapses under its own dysfunctional weight. Here is a chart of the process: 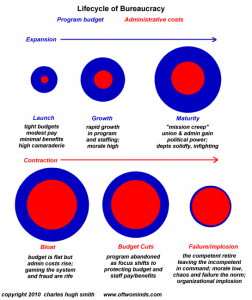 Another way of saying vote with your feet is opt out: opting out is an increasingly attractive strategy as empires, nation-states and corrupt, self-serving bureaucracies lose their grip and start sliding toward dissolution and implosion.

In financial terms, admitting the borrow-and-spend game is over is called bankruptcy. Sadly, there is no institutional equivalent for the politically bankrupt systems that dominate the major trading nations and alliances.

It’s not just empires that collapse: relationships, neighborhoods, enterprises, towns, cities and regions can collapse, too. The dynamics of collapse are scale-invariant, meaning that they work equally well in groups small, medium and large.

Here are the nine dynamics of decay that lead to collapse:

All of these dynamics are currently in play around the globe.

Michael Grant touched on many of these dynamics in his excellent account The Fall of the Roman Empire, a short book I have been recommending since 2009:

Rather than sacrifice ourselves to prop up a system that protects the privileges of the few at the expense of the many, we can choose to no longer grease the machine with our sweat, blood, tears and toil.

When do we finally accept the hopelessness of reforming a self-serving machine bent on destruction?