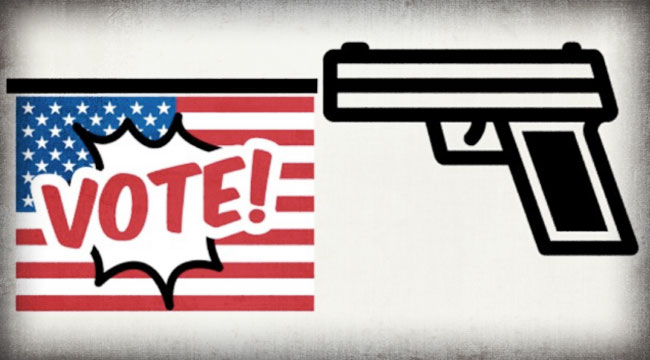 “What ass first let loose the doctrine that the suffrage is a high boon and voting a noble privilege?” — H.L. Mencken

“Can you bring it in on Tuesday?”

“Sure, why not?” I replied. The “check brake” light had come on in my Land Rover, and we were trying to agree on a service appointment time with the dealer.

“Oh… I don’t vote.” From the look on his face, you would have thought I just spit on a kid.

“Hey… maybe it’s the cynic in me… but I just don’t believe them.”

So began one of my favorite debates of the year.

“It’s jerks like you who don’t vote,” a reader writes, “who gave us Obama in the first place.”

What if we did vote… but voted for Obama? How would you know?

Blaming us for who sits in the White House is ire as misguided as a drag queen getting upset by not being able to attend a secret KKK ceremony. Given the nature of politics, what makes you think the candidate you are voting for can deliver? Politics as an enterprise became fetid long before our time.

“If someone asks you to vote for him at the next election,” wrote Henry Miller, “ask him, I beg you, what he can do for you that you cannot do yourself. Ask him whom he is voting for. If he tells you the truth, then go to the polls and vote for yourself…

“Does the man who asks for your vote find you your job, does he provide your family with food and shelter, does he put clothes on your back, does he provide the education you need… does he even bother to see that you get a decent burial? The only time he is concerned about you is when you can make money for him. No matter how little you make, he wants part of it…

“From childhood, you were taught that it is right and just to delegate your powers to someone else. You never questioned it because everything you are taught in school has one purpose: the glorification of your country.

“Somehow, though it is your country, you seem to have no part in it until the time comes to surrender your life.”

Richard Cobden, a member of the U.K. Parliament over 110 years before Miller, implored: “Can you by legislation add one farthing to the wealth of the country?

“You may, by legislation, in one evening, destroy the fruits and accumulations of a century of labor; but I defy you to show me how, by the legislation of this house, you can add one farthing to the wealth of the country.”

Yet so pervasive is the idea that it’s your duty to vote, CNN ponders this morning whether voting should be made compulsory in the U.S., as has been proposed in Australia. What if, instead, choosing to not vote (which “just encourages the bastards,” as P.J. O’Rourke famously said) is the hallmark of a successful society that doesn’t need politicians to make it prosperous?

Ironically, as Ed Yardeni points out in this morning’s Business Insider, Election Day is one of the best days to trade in the stock market.

Our friend Jim Rickards gets us back to the crux of the “problem” by tweet this morning:

If you live in a battleground state, as we do in Maryland, you’ve been inundated with third-party attack ads, “Get out the vote” campaigners, late-night phone calls, placards at every stoplight, do-gooders carrying signs. So much time… so much money… so much ill will.

Just for fun, try to explain an attack ad to an 8-year old.

And what’s it all for, anyway?

Is Larry Hogan really going to be a better governor than incumbent Lt. Gov. Anthony Brown? PACs from all over the country are convinced… and are sending armies of acolytes in to sway “voters” one way or the other. What’s really at stake, especially if you’re in the middle class, is not what the new governor can do for you, but what can you do for him and his party.

And let’s not forget the race card. One of my favorite political ads in the Maryland race depicts an African-American woman from the reasonably affluent Mount Washington neighborhood saying she’s been a lifelong Democrat, but this year, she’s voting for Hogan, a rather stocky white guy, who you wouldn’t ordinarily associate with the “black vote.” Brown, the outgoing governor’s pick, is a younger, fit-by-comparison African-American man. The ad is so obviously calculated that only a political strategist from another state could get giddy with pride over the impact they hope it will have.

Still, the race for governor appears about as important and relevant as the one for class president in your local high school freshman class. In my son’s class, they voted in a kid that nobody knew yet because his name is James Bond.

And yet… the stakes are, umn, higher when you get outside of school politics.

“Military spending is not a farce, just rampant corruption,” a reader writes, pivoting slightly to yesterday’s Daily Reckoning, but still very much on theme. “All the spending, and especially top-secret military budgets, produce fantastic profits and huge political payoffs. Very often, there is no oversight whatsoever.

“The core of the problem lies with the ruling elite. They make great returns on defense stocks, but also get to invest overseas and get even greater returns because of unbridled labor and resource exploitation. Our military makes these investments safe for them, and they don’t even have to pay for it.

“The middle class does it for them at the same time their jobs are outsourced overseas because of the whole process! That last part is the real farce, as most Americans are willing participants and are too stupid to understand what is happening to them.”

P.S. I still managed to get the service appointment at Land Rover. But I noticed this morning they weren’t quite as friendly as they usually are. Oh… and I’ve been summoned for jury duty in Baltimore City for the 5th time next week.

P.P.S. If you haven’t signed up to receive our Daily Reckonings by email, click here. We do our best to make each one the most informative and entertaining 15 minute read of your day.