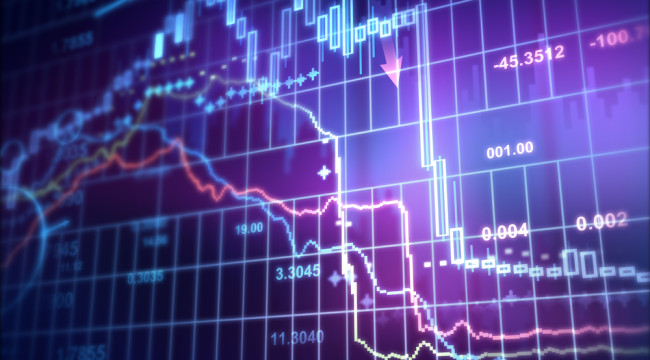 The $14 trillion tsunami of junk bonds that Jim Rickards warned us about starting in January might be even bigger than he first suggested.

As a reminder, he came up with the $14 trillion tally like so…

This $14 trillion debt pile “cannot possibly be repaid or rolled over under current economic conditions,” Jim said in this space on Jan. 14.

If default rates are only 10% — a conservative assumption — this corporate debt fiasco will be six times larger than the subprime losses in 2007.

Jim said the peak of the defaults wouldn’t come till next year. Well, next year is only three months away…

Now comes Bank of America/Merrill Lynch warning about junk bonds as a “slow-moving train wreck that seems to be accelerating.”

We’re still trying to wrap our mind around the metaphor — doesn’t that defy the laws of physics? — but the report’s essential point is clear enough. The first signs of weakness among junk-rated U.S. companies showed up 18 months ago in the coal sector. Then it slowly spread to the rest of the commodity complex. Now it’s showing up in retail, food, semiconductors, telecom…

“The weakness in high-yield credit is to us not just a commodity story,” the report says; “it is about highly indebted borrowers struggling to grow, an investor base that cannot digest more risk, a market that has usually struggled with liquidity and an economy that refuses to rise above mediocrity.”

That means lower earnings for junk-rated companies… and less ability to service their debts. 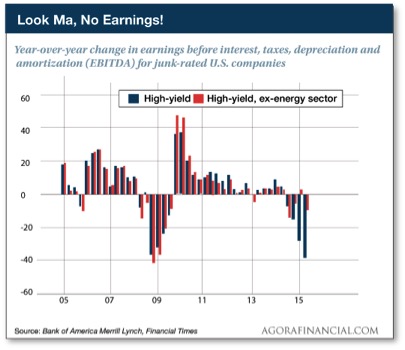 Standard & Poor’s is also joining the party — warning “the current crop of U.S. speculative-grade issuers appears weak to us and particularly susceptible to any sudden or unanticipated shocks.”

S&P says more companies have already defaulted this year than at any time since 2009 — 47 filings in all, RadioShack the most recognizable name. And the report says come June of next year, the default rate will likely be double that of two years earlier.

So how much debt are we talking about in addition to the original $14 trillion?

That’s not easy to quantify. But S&P reminds us companies with junk-rated debt have issued $2.5 trillion in bonds in recent years. About $1.5 trillion is due to mature within the next five years. Some of that debt is in the energy sector… but not all.

So why now? Even the Financial Times recognizes the Federal Reserve shoulders some of the blame:

Years of easy monetary policy that kept borrowing costs low, a wave of mergers and acquisitions and the specter of shareholder activism have all contributed to an erosion of balance sheet quality.

Also sounding a warning is Carl Icahn — the billionaire investor who first made his name as a “corporate raider” in the ’80s.

Only he doesn’t have to use the polite and measured language of Merrill Lynch and S&P. He told Reuters this week, “God knows where this is going. It’s very dangerous and could be disastrous.

“Those guys who run these companies are borrowing money very cheaply, leveraging up their companies, using it to do two things… They are going in and they are buying back stock or, even worse, making stupid takeovers.”

Among the most eager buyers of these bonds are the exchange-traded funds (ETFs) that specialize in junk bonds — think HYG and JNK. Icahn says retail investors overestimate how easy it’ll be to unload those ETFs in a crisis.

We warned you about liquidity in these ETFs back in June: Hedge fund manager Erik Townsend related to us how he was having trouble short selling those ETFs; his broker closed out his positions because there weren’t enough shares available to borrow.

God help anyone who owns those ETFs now, says Icahn: “It’s like a movie theater and somebody yells, ‘Fire!’ There is only one little exit door,” he said. “The exit door is fine when things are OK, but when they yell, ‘Fire!’ they can’t get through the exit door … and there’s nobody to buy those junk bonds.”