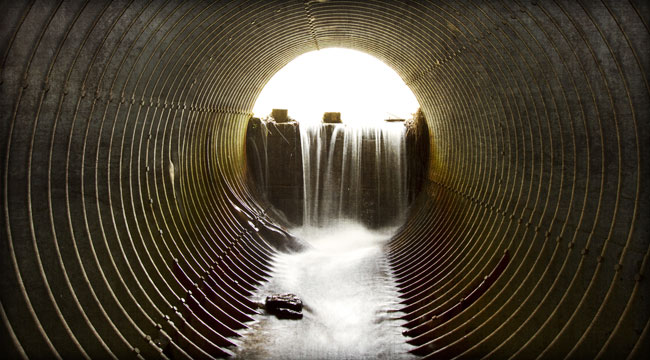 US Dollars: Water Pipes for the Financial System

Since May of last year, financial news has latched onto the taper with full force. Don’t worry, we’re not going to discuss it at any great length here… we only mention it because we’ve been thinking about the dollar and currencies in general, and what determines the value of a currency.

You see, we think the whole taper story is a con. The line you’re being, errr, ‘fed’ is that the US economy is improving and that, as a result, interest rates must ‘normalize’.

What’s helping to reinforce this notion is the strengthening dollar. Investors see the dollar rising against a range of other currencies and think it represents a preference for US assets because of the health of their economy.

Speculative capital is flowing back through the dollar in a hurry, pushing up its relative value against a whole host of currencies…

We think it’s a lot more complicated than that.

This is based on the view that capital flows through a currency, not into one. This idea is going to take a bit of explaining, but it’s an interesting one so bear with us.

First, it helps if you understand the general flow of capital throughout the world. Grossly oversimplified, the US is the source of much of the world’s liquidity and capital flow via its US $500 billion per year trade deficits.

In other words, the US sucks in $500 billion more in goods and services than it sends out to the rest of the world, so it must pay for the excess in paper currency. Sort of. It actually pays for it by borrowing, and it does that by issuing Treasury bonds.

It’s this constant and equal flow that maintains the dollar’s value. When a little more capital flows out than flows back in, the dollar weakens against whatever currency is not maintaining an equal flow. And when the inflow is greater than the outflow, the opposite happens.

So what you’re seeing now is a general inflow back into dollar denominated assets. But as we said, it’s more complex than just that. Here’s what we think may be going on…

Capital flows based on international trade in goods and services are just one part of the equation. Financial ‘speculative’ capital flows also play a major role in determining currency values.

For example, the US government issues Treasury bonds to finance its deficit, which represents spending on real goods and services. These bonds, while ostensibly being a government IOU, are also a financial asset…one that the holder can ‘borrow against’ to speculate with.

That is, if you hold a Treasury bond you can use it as collateral to borrow dollars and then spend those dollars to get exposure to say, emerging markets. When QE was in full force and liquidity flowing, that was a pretty popular trade.

But now, with the market expecting the QE party to end, or at least to ‘taper off’ more, those speculative flows are reversing. Speculative capital is flowing back through the dollar in a hurry, pushing up its relative value against a whole host of currencies (especially emerging market currencies) as it does so.

So there are two capital flows to keep in mind here, one that concerns trade in real goods and services and one that relates to financial, speculative trade.

Right now, we think the strength in the dollar relates more to what is going on at the speculative end of the market…the financial flows. And if we’re right, it’s actually masking some major structural weakness in the dollar.

Because of what’s happening at the trade flow end of the spectrum. The US is still generating an annual trade deficit of around $500 billion (meaning an outflow of dollars to pay for the goods). In order for the dollar to remain stable (ignoring the financial side of things for the moment) foreigners must plug this gap by sending the capital back through the dollar to buy dollar denominated assets.

But right now, foreign creditors to the US are not doing that. The appetite for long term US assets, specifically Treasury bonds, is waning…big time. That’s not a healthy development for the dollar, but right now a reversal of speculative capital flows back to the US (going through the dollar to get there) is masking this looming structural issue.

And the Fed’s promise to taper is making things worse. Currently the Federal Reserve is buying about $35 billion a month in Treasury bonds, or $360 billion per year. This is more than enough to cover the trade deficit, but it’s certainly not a good look to have your central bank finance 100% of your excess consumption.

In fact, it’s downright dangerous. Because instead of foreigners doing it, which involves selling foreign currency to buy dollars, the Fed effectively creates more dollars to buy dollar denominated assets.

That may sound confusing, so let us break it down. When foreigners finance US deficits, it represents genuine demand for dollars (or movement of capital through dollars). When the Federal Reserve does it, it represents an increase in dollars relative to foreign currencies. Not good for the dollars’ long term value.

And all those ‘dollars’, or dollar-denominated assets, are still out there. 30-odd years of accumulated trade deficits sit in foreign central banks around the world in the form of US Treasury bonds. The stock of federal debt, held abroad, is enormous. In other words, there is a very large supply of dollar denominated debt sitting outside US borders.

As you probably know prices are set at the margin. The next seller (and buyer) of just one unit of the enormous dollar denominated stock sets the price.

So if some foreign holder wants to sell, and no other foreigner wants to buy, then chances are it will be the Fed who becomes the marginal buyer. Such a transaction is dollar negative, as it effectively creates a dollar to buy a dollar.

It will therefore ultimately be negative for the value of the greenback vis-a-vis US trade partners. In turn, this will increase the price of imports, which could push up the nominal value of the trade deficit and make matters worse. Or the US could pull its head in and consume less, which higher bond yields may force it to do.

Who knows? But what is becoming clearer are the intractable problems of too much debt moving around the international financial system. Tapering, speculative capital flows, rising bond yields and a reduction in foreign financing of the trade deficit are all intertwined.

The next few years will prove to be very interesting indeed. There are many scenarios that can still play out, but a sustainable US economic recovery is not one of them.

Ed. Note: While a sustainable recovery for the US economy may be far off (if it’s possible at all), there are still ways for you to protect and grow your wealth. Sign up for the FREE Daily Reckoning email edition, and you’ll receive a daily rundown of the financial markets, a few important things to watch out for, and at least 3 chances to discover real profit opportunities no matter what the market looks like. If you’re not reading The Daily Reckoning email edition you’re not getting the full story. Sign up for free, right here to fix that.