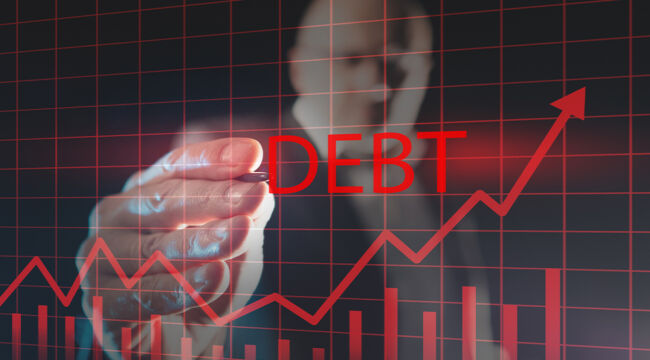 Today we stagger into the Minotaur’s maze of money…

It may be familiar space to you. But a man must occasionally remind himself of his surroundings… fix his bearings… take stock of his position.

And so we proceed…

You sink your hand into your wallet. It resurfaces grasping a $20 bill.

This bill is an asset to you, its holder. It represents a claim upon goods and services.

But this asset of yours is but one side of a glass mirror.

Today All Money Is Debt

This you must realize: All money circulating — all bills, coins, checking and savings deposits, all of it — has been borrowed into existence.

That is, all money in existence represents a debt… taken sometime… somewhere… by someone.

That debt may not be your debt. But it is someone’s debt.

This is the inner secret of the lovely $20 bill you presently hold in your hand.

It leads a double existence — one in light — one in shadow.

We hazard that Andy Jackson is doing 10,000 revolutions each minute in his bleak Tennessee grave.

For this is the man who shuttered the Second Bank of the United States in 1835 — the central bank — and retired the national debt for the first and only occasion in history.

At no other time has Uncle Samuel poked his head above the water.

And here is poor Old Hickory, posthumously dragooned into the very arrangement against which he raged ceaselessly.

Recall, all money constitutes an expression of debt. The asset merely represents the reverse side of the liability.

We must therefore conclude:

If all dollar-based debt was retired — all $82 trillion, public and private — every dollar would vanish into air that is thin… like data from a Hillary Clinton hard drive… or Donald Trump’s presence on Twitter.

Now lift your jaw from the floor. Now find your footing. Now regain your shaken wits.

Do we speculate? Do we stretch the facts?

Neither. We speak by the book…

Mr. Marriner Eccles bossed the Federal Reserve in May 1941. At that time, he sat down in front of the House Committee on Banking and Currency.

A bewildered congressman — Patman, by name — asked Eccles how the Federal Reserve had acquired the funds to purchase two billion dollars of Treasury bonds in 1933.

Our minions have fished up this exchange from the Congressional Record:

ECCLES: We created it.

PATMAN: Out of what?

ECCLES: Out of the right to issue credit money.

PATMAN: And there is nothing behind it, is there, except our government’s credit?

Imagine it if you can — no debt, no money.

“The Tragic Absurdity of Our Hopeless Situation Is Almost Incredible”

Did Mr. Eccles botch the facts? He did not. Here is the Credit Manager of the Federal Reserve’s Atlanta outpost, Mr. Robert Hemphill:

If all the bank loans were paid, no one could have a bank deposit, and there would not be a dollar of coin or currency in circulation. This is a staggering thought. We are completely dependent on the commercial banks. Someone has to borrow every dollar we have in circulation, cash, or credit. If the banks create ample synthetic money we are prosperous; if not, we starve. We are absolutely without a permanent money system. When one gets a complete grasp of the picture, the tragic absurdity of our hopeless situation is almost incredible — but there it is.

Mr. G. Edward Griffin is the author of The Creature from Jekyll Island.

Here he seizes his hammer… and pounds home the nail Messieurs Eccles and Hemphill pegged up:

It is difficult for Americans to come to grips with the fact that their total money supply is backed by nothing but debt, and it is even more mind boggling to visualize that, if everyone paid back all that was borrowed, there would be no money left in existence. That’s right, there would be not one penny in circulation — all coins and all paper currency would be returned to bank vaults — and there would be not one dollar in any one’s checking account. In short, all money would disappear…

Every dollar that exists today, either in the form of currency, checkbook money, or even credit card money — in other words, our entire money supply — exists only because it was borrowed by someone; perhaps not you, but someone.

We are now fumbling in darkness, deep into the dizzying monetary maze we have entered. Yet we press on… deeper into the labyrinth…

Don’t Forget About the Interest

Assume the $10,000 comes tethered to a 5% rate of interest. Assume further the bankman knocks at his door five years hence, calling in his loan, palms extended.

Where will this sap secure the $1,322.74 to service the interest? The larger question:

Must the Federal Reserve issue increasing quantities of money to service all outstanding debt — $82 trillion in the case of the United States? Mr. Griffin:

One of the most perplexing questions associated with this process is “Where does the money come from to pay the interest?” If you borrow $10,000 from a bank at 9%, you owe $10,900. But the bank only manufactures $10,000 for the loan. It would seem, therefore, that there is no way that you — and all others with similar loans — can possibly pay off your indebtedness. The amount of money put into circulation just isn’t enough to cover the total debt, including interest. This has led some to the conclusion that it is necessary for you to borrow the $900 for the interest, and that, in turn, leads to still more interest. The assumption is that, the more we borrow, the more we have to borrow, and that debt based on fiat money is a never- ending spiral leading inexorably to more and more debt.

This is a partial truth. It is true that there is not enough money created to include the interest, but it is a fallacy that the only way to pay it back is to borrow still more.

A partial truth? Why partial? And what is the entire truth, sir?

The Exchange Value of Labor

“The assumption fails to take into account the exchange value of labor.” Please elaborate:

Let us assume that you pay back your $10,000 loan at the rate of approximately $900 per month and that about $80 of that represents interest. You realize you are hard pressed to make your payments so you decide to take on a part-time job…

The decision then is made to have the bank’s floors waxed once a week. You respond to the ad in the paper and are hired at $80 per month to do the job. The result is that you earn the money to pay the interest on your loan, and — this is the point — the money you receive is the same money which you previously had paid. As long as you perform labor for the bank each month, the same dollars go into the bank as interest, then out the revolving door as your wages, and then back into the bank as loan repayment.

Just so. You serve the interest by serving your master.

But what if you decline to wax the bank’s floors? If you do not serve your master?

It is not necessary that you work directly for the bank. No matter where you earn the money, its origin was a bank and its ultimate destination is a bank. The loop through which it travels can be large or small, but the fact remains all interest is paid eventually by human effort.

What — then — are we to conclude from the foregoing?

The significance of that fact is even more startling than the assumption that not enough money is created to pay back the interest. It is that the total of this human effort ultimately is for the benefit of those who create fiat money. It is a form of modern serfdom in which the great mass of society works as indentured servants to a ruling class of financial nobility.

This conclusion appalls us.

We hazard pieces are missing from this jigsaw puzzle. The deepest mysteries of the monetary arts elude us.

Shall we strike the chains of bondage from our wrists?

They will only snap under the relentless strain… not because we choose to snap them.

When that day arrives we shall be finally free. Free — without one penny to our name.