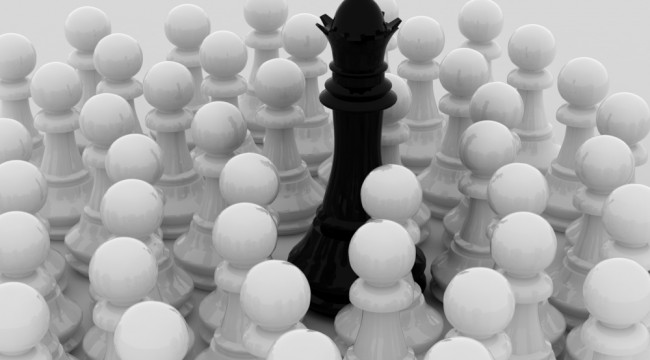 Adam Smith was a great 18th-century thinker and pioneer in economics. He had an idea about how to predict when a financial crisis was imminent. In his magisterial work, The Wealth of Nations, he wrote: “Follow the flows, baby. Follow the flows.”

Well, if he didn’t write it, he should have.

The fact is modern economies float on a sea of money. When you drain that money away, some of the ships start to run aground. The U.S. current account is one way to measure the water level for the global economy.

I borrow the nearby chart from Charles Gave, a 40-year veteran of markets and co-founder of the research firm GaveKal. In a note he put out on Feb. 7, Gave writes:

“During my career, all international financial crises have occurred against the backdrop of an improving U.S. current account deficit as evidenced by the first chart.” 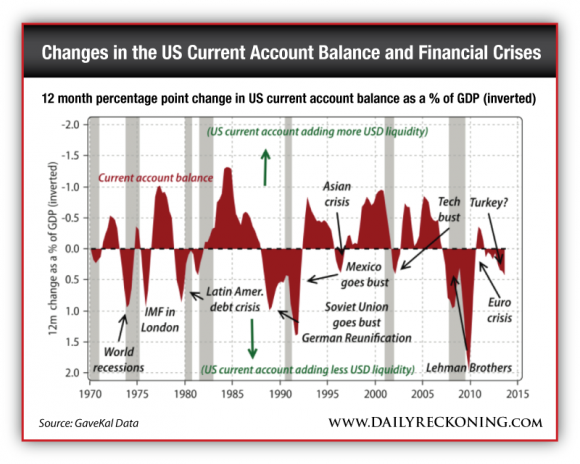 When the current account balance shrinks, there are fewer dollars going overseas, which creates a problem for other countries. As Gave writes:

“The problem is that the rest of the world must find dollars to buy energy, conduct trade settlement and service dollar debts.”

The U.S. dollar is (still) the king of currencies. It is the reserve currency. This means other countries rely on it and use it. They don’t settle up in Chinese yuan or euros or yen. (Not on any great scale.) They use dollars.

So think back to old Econ 101. Less supply and strong demand means the price goes up. So a whole raft of foreign currencies has fallen against the U.S. dollar in the last year.

But there are other interesting correlations at work here, too.

Global bear markets tend to happen when U.S. current account improves, as Gave points out. That’s not a surprise. Think about what those depreciating currencies mean for the economies involved. It means it is becoming more expensive to buy things from abroad.

The Wall Street Journal ran an interesting article about the effect of this in South Africa. Sheffield makes auto parts and cutlery in South Africa, where the rand has lost nearly 25% of it value against the dollar in the last year.

Sheffield must now pay more for nickel and chrome imports. It can’t pass these costs on, so its profit margins get squeezed. The weak rand also squeezes consumers. Workers have gone on strike for wage increases. It gets messy quickly.

To some extent, all of these countries have to go through some adjustments as their currencies fall. These won’t be painless. It can make it hard on some businesses in these countries. And no surprise, the stocks tend to underperform.

The flip side is that U.S. stocks tend to outperform. Again, not surprising. Gave distills it down to the essence: “If the world outside of the U.S. faces a shortage of dollars, then one should be invested in the place with a concentration of enterprises that hold positive cash flows in dollars.”

That place is, of course, the U.S.

Since 1970, U.S. stocks have tended to beat out global markets when the U.S. current account improves. The U.S. cut the dollar’s remaining ties to gold in 1971. Ever since, it’s floated and been nonconvertible into anything but itself. So any analysis before that date is not applicable. Take a look at the nearby chart. 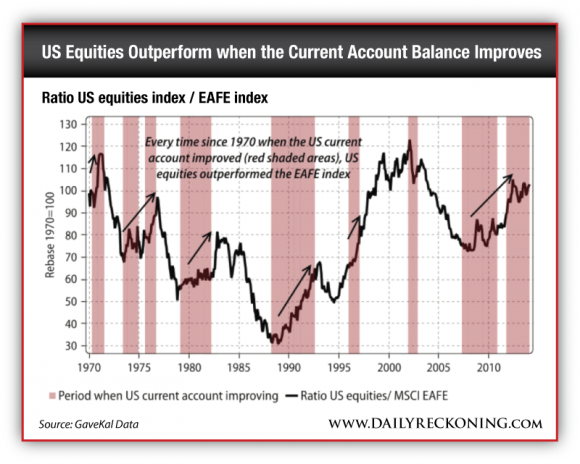 This doesn’t mean U.S. stocks have to go up. U.S. stocks could simply go down less than foreign stocks. (Note the EAFE index in the above stands for Europe, Australasia and the Far East. It’s the oldest international stock index, dating back to 1969. I suppose that’s why Gave chose it.)

Besides, the usual caveats apply. There is no guarantee that markets will conform to past patterns. And everything above is essentially backward looking. It explains what has already happened. Trends can change quickly. The U.S. current account deficit can turn around and widen again. Some foreign markets may well prove excellent buys here. (I have my favorites.)

The main point here is to recognize the pressure the shrinking U.S. current account puts on the rest of the world. You ignore these macroeconomic credit conditions at your peril.

As Jim Grant put it in a recent interview when asked about investors fancying themselves macroeconomists:

“Let me tell you first about the ones who refused to fancy themselves macroeconomists. Investors who turned a blind eye to credit — to monetary policy, to the Federal Reserve — didn’t notice the stupendous buildup of bad debt through 2007. They tended to own a lot of optically cheap financial stocks that got cheaper and cheaper until they weren’t there anymore.”

In the pages of my newsletter, Capital & Crisis we have always been attentive to the credit cycle. Maybe it’s the former banker in me.

The current credit cycle is one of tightening global liquidity in U.S. dollars abroad. Yet I continue to hear and read about how “emerging markets are cheap.” Some of them may well be. But maybe they are cheap for a good reason. They can just get cheaper. And cheaper still.

“We can’t know the future,” Grant added, “but we can observe the present.”

I agree. What the present shows is that the risk of a global bear market is high. It also shows how dependent much of the rest of the world is on U.S. dollars.

The U.S. dollar is still — still! — the king of fiat currencies.