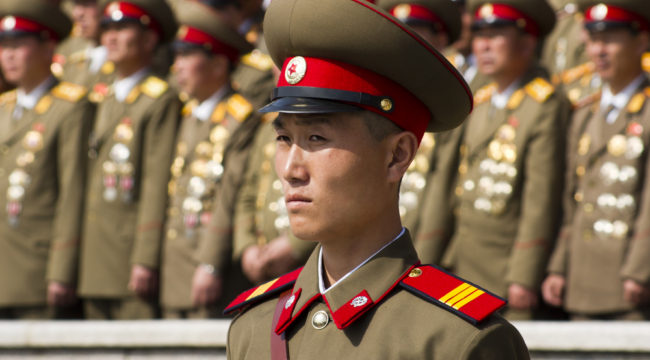 The world was watching North Korea this weekend. Many thought it might conduct another nuclear test to coincide with its annual holiday commemorating the birth of its national founder, Kim Il Sung.

There was no nuclear test. But that doesn’t mean it was a quiet weekend.

But the test was a failure, and the missile exploded shortly after liftoff.

Why did it fail?

It’s too soon to say for sure.

But former British Foreign Secretary Sir Malcolm Rifkind thinks the U.S. may have sabotaged the launch through a cyberattack. Rifkind told the BBC:

It could have failed because the system is not competent enough to make it work, but there is a very strong belief that the U.S. — through cyber methods — has been successful on several occasions in interrupting these sorts of tests and making them fail.

Many believe the U.S. has been interfering with North Korean missile tests since 2014, under an Obama policy referred to as “Left of Launch.” That’s probably what Rifkind was alluding to.

Interestingly, one North Korean newspaper hinted, in typical North Korean fashion, that a U.S. cyberattack may have indeed been responsible for the failure:

Yesterday, [the U.S.] dared to play a ferocious game of Special Operation targeting our ultimate dignity.

Deputy National Security Adviser K.T. McFarland was asked yesterday about Sunday’s failure but declined to comment, saying only that the test was “a fizzle.”

She did add, however, that “With any country, major country, we are entering a cyber platform, a cyber battlefield. That is where a lot of the wars of the future are going to be fought,” she continued.

And President Trump is fully aware of the emerging importance of cyberwarfare. On the campaign trail, for example, he pledged to unleash a fresh wave of spending in the cyber sphere.

And recent events make cybersecurity even more pressing. If the U.S. is responsible for this weekend’s test failure, North Korea may try to retaliate with its own cyberattacks.

In the case of North Korea, you know, a kinetic threat against the United States right now, I don’t think is likely, but certainly a cyber threat.

Trump intended to issue an executive order on cybersecurity at the end of January. But it was delayed, likely for bureaucratic reasons typical of a new administration. But we can expect a rollout once all the policy people are in place and the details hammered out.

I believe this executive order could be signed within weeks, especially as geopolitical tensions increase around the world.

And I believe a number of small companies specializing in cyberwarfare will be flooded with new federal money very soon. Investors who get in on these opportunities now — before Trump signs that executive order — could see massive gains as that money starts rolling in.

Now’s the time to take advantage, while that small window remains open.