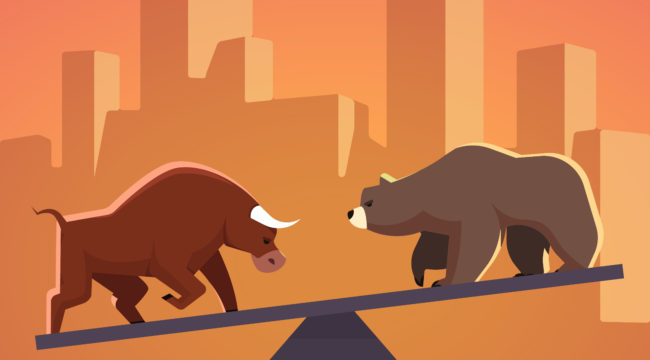 Markets were up and down like a yo-yo today, but the Dow closed today up 330 points.

Since last Thursday we’d seen a triple meltdown in bonds, stocks and cryptocurrencies. What’s amazing is that there’s no consensus on why these three markets were all crashing at once.

Using my unique Project Prophesy predictive analytic methods, I can offer investors a clear view of why markets have been falling, and what’s next.

Despite the recent losses and volatility, investors who position correctly today can reap huge gains in the weeks ahead.

Usually there’s some convergence among analysts when there’s this much drama in the markets. Analysis will agree on a theme such as “higher rates” or a “fat finger” trade to explain the mayhem. 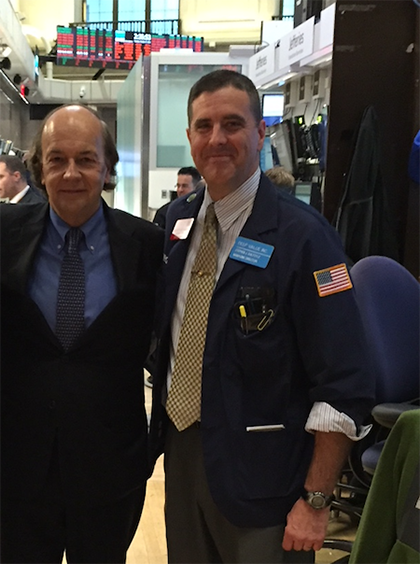 Your correspondent on the floor of the New York Stock Exchange with Stephen “Sarge” Guilfoyle, NYSE Director of Floor Operations. Sarge told me that the days of the specialist market maker who would stand up to waves of selling were long gone. He said, “Jim, there’s no liquidity on the floor. When massive selling starts investors are on their own.” That advice has proved prescient in recent days.

Not this time. Opinion is all over the place. In fact, there are two completely contradictory story lines making the rounds. It’s truly a tale of two markets. Let’s cut through that to see where things really stand.

The first narrative could be called “Happy Days are here Again!” It goes like this: We’ve just had three quarters of above trend growth at 3.1%, 3.2% and 2.6% versus 2.13% growth since the end of the last recession in June 2009. The Federal Reserve Bank of Atlanta GDP forecast for the first quarter of 2018 is a stunning 5.4% growth rate.

This kind of sustained above-trend growth will be nurtured further by the Trump tax cuts. With unemployment at a 17-year low of 4.1%, and high growth, inflation will return with a vengeance.

This prospect of inflation is causing real and nominal interest rates to rise.

That’s to be expected because rates typically do rise in a strong economy as companies and inpiduals compete for funds. The stock market may be correcting for the new higher rate environment, but that’s a one-time adjustment. Stocks will soon resume their historic rally that began in 2009.

The competing scenario is far less optimistic than the Happy Days analysis. In this scenario, there is much less than meets the eye in recent data.

Last Friday’s employment report was much touted because of the 2.9% year-over-year gain in average hourly earnings. That gain is a positive, but most analysts failed to note that the gain is nominal — not real. To get to real hourly earnings gains, you have to deduct 2% for consumer inflation.

It’s also important to note that the Atlanta Fed GDP report, while useful, typically overstates growth at the beginning of each quarter and then gradually declines over the course of the quarter. This is a quirk in how the report is calculated, but it does suggest caution in putting too much weight on the above-trend GDP growth suggested.

Finally, analysts need to recall that monetary policy acts with a substantial lag. The effects of Fed tightening in 2016 and 2017 are just beginning to be felt now. These effects are being felt even as the Fed doubles down with further rate hikes and balance sheet reductions, which are another form of tightening.

All of these forces – weak labor markets, Fed tightening, weak growth and a tapped-out consumer – point to a Fed pause in interest rate hikes by June at the latest. That pause will lead to a weaker dollar, and higher commodity prices.

With these two competing economic scenarios in mind, what is my predictive analytic models telling us about the prospects for commodity prices in 2018?

At Project Prophesy,I use third-wave artificial intelligence (AI) to offer readers the most accurate and powerful predictive analytics for capital markets available anywhere.

First wave AI involved rules-based processing. Second wave AI involved deep learning as the iteration of rules produced new data that could be incorporated into the original rules. Third wave AI combines deep learning with big data as machines read billions of pages of information in plain language and interpret what they read.

With Project Prophesy the machines are never on their own. Human analysts oversee the output and update the algorithms as needed to steer the system on a sensible path. Human+Machine processing is at the heart of Project Prophesy predictive analytics.

Right now, these analytics are telling us that commodity prices are set to rally through the remainder of 2018.

This is based on continued weakness in the U.S. dollar. That weakness will emerge under either of the two economic scenarios outlined above.

If the economy falters, which I expect, the Fed will pause in its path of interest rate hikes. Today the market is pricing in at least two and as many as three Fed rate hikes this year. A rate hike in March seems certain unless the stock market falls another 10% between now and mid-March.

However, if the Fed pauses in March (due to a market decline) or in June (due to weaker economic conditions), this will be a form of ease relative to expectations. That ease will weaken the dollar.

Conversely if the economy shows continued strength and above-trend growth, which I do not expect, inflation will emerge. That inflation combined with a weakened fiscal position for the U.S. will cause a decline in confidence in the U.S. dollar as a store of value.

That decline in confidence will weaken the dollar and lead to higher dollar prices for commodities. This scenario is basically a replay of what happened in the late 1970s and early 1980s before the dollar was rescued by Paul Volcker, Ronald Reagan and James Baker.

In either scenario – weakness with a Fed pause, or strength with increasing inflation – the dollar will weaken, and commodity prices will rally.