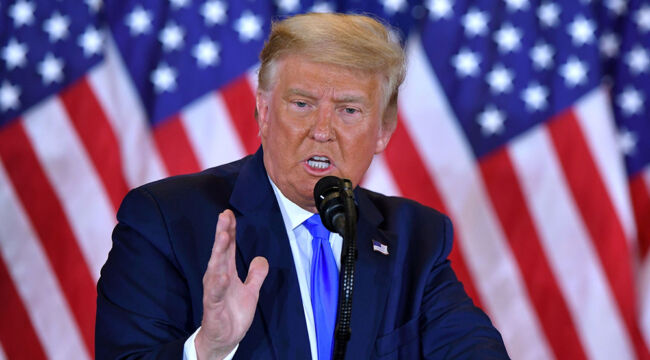 Yesterday we violated every decency, shocked every sensibility, offended every piety…

That is because we maintained Donald Trump did the nation an incalculable good.

An incalculable good? Here is a demoniac, argue his foes — an enfant terrible, a vicious scourge upon American democracy.

Just so. And let it go into the record:

We are not a Trump enthusiast. We find his economics badly informed, for example. In certain instances, we find them atrocious.

More importantly, we believe he failed in his central duty…

Candidate Trump was elected not as statesman, but as a sort of destructionist — a sapper planting dynamite beneath ruling class trenchworks, beneath the “deep state” fortifications that ring the nation.

He was in many fashions a man out of his depth… a political naif surrounded by jackals, turncoats, sharpers and cutthroats.

“Never Do an Enemy a Small Injury”

He forgot his Machiavelli, we concluded yesterday — if he had ever learned it:

“Never do an enemy a small injury.”

That is, a man must never wound an enemy without killing him. He must plunge his dagger through the vitals.

If he strikes at the peripheral anatomy, if his blow fails to go home… he has merely kindled a hatred, an avenging fire.

He has invited a counterblow.

Dr. Angelo Codevilla, who we cited extensively yesterday — and shall again today:

Trump denounced his and his supporters’ enemies… [but without] hurting them, motivating them to do their worst, and letting them do so with impunity. He effectively accredited the very people who were discrediting him. Suffice it to say, within a month of President Trump’s inauguration, few if any in Washington were afraid of him.

Some examples keenly in point:

Trump knew that FBI Director James Comey, his chief subordinates, and Director of National Intelligence James Clapper had broken the law by surveilling his campaign. Nevertheless, he praised them and their agencies, kept them in office, did not refer them for prosecution, and kept secret the documents associated with their illegalities.

Trump let himself be stampeded into firing General Michael Flynn on wholly specious grounds — the only high profile national security official who had supported him and who stood in the way of the intelligence agencies’ plans against him — and stood by as the ruling class ruined Flynn’s life.

Days after the inauguration, he suffered the CIA’s removal of clearances from one of his appointees because he was a critic of the agency. Any president worthy of his office would have fired the entire chain of officials who had made that decision. Instead, he appointed to these agencies people loyal to those officials and hostile to himself, notably CIA’s Gina Haspel, who likely committed a crime spying on his candidacy… He criticized officials over whom he had absolute power, but left them in office.

Next we come to Trump’s Attorney General, Mr. William Barr — Judas in the Garden of Gethsemane:

Trump last month excoriated former Attorney General William Barr personally for having failed to investigate election fraud. But, regardless of the charges’ merit, from February 2019 to December 2020 Barr served at Trump’s pleasure. This was the time when the ruling class’ bureaucratic and judicial edicts were overriding state election laws. It was no secret that they were turning power over the outcome of the 2020 election from the voters to those who count the votes — in other words, their friends.

Trump had the right and duty to direct his attorney general to investigate and act against these illegalities in a timely manner, and to replace Barr, and however many officials it might take to make this happen. What might have happened if, instead of waiting to level an impotent personal attack, Trump had used his powers in a timely way to make this happen, and his pulpit to explain to the country why doing so is essential to the rule of law and to democracy? But he did not do this.

And so we have Trump’s calendar of sins. Yet we come not to bury Trump… but to praise Trump.

Trump Drew the Creatures Out of the Swamp

He did not “drain the swamp,” it is true. He nonetheless performed a high, high service…

Like crooks smoked out by the lawman, the swamp monsters came flushing out of the murk… and exposed themselves to the public gaze.

Their disdain for the man was so vast, their aching to undo him so acute, they could not resist the pull.

Trump drew them out. They could no longer slink along in the shadows. Codevilla:

Trump’s election only accelerated the imposition of the secular creed of government agencies, corporate America, the educational establishment, and the media onto the rest of Americans.

Here is the fellow’s cardinal virtue, an accidental virtue at that:

He renewed America’s distrust of its gatekeeping elites, its patrolmen of permissible thought.

How many Americans were familiar with the term “deep state” before President Trump?

A corporal’s guard perhaps. Yet it has now entered the popular vernacular.

Most Americans likely held the Federal Bureau of Investigation in high regard prior to 2016.

But after the massively discredited Steele dossier and “Russiagate?”

Today, many Americans would trust a dog with their dinner before they would trust the FBI with the truth.

How many Americans booed the Centers for Disease Control before… or the National Institute of Allergy and Infectious Diseases?

But when President Trump began bugling the medication hydroxychloroquine as a COVID-19 killer, the medical institutions denounced it as a quack cure.

Yet scores of physicians had employed it to highly positive effect. Their mouths were subsequently taped… and social media put them under the ban.

Was the business anything other than political? How many lives were lost because politics denied them the therapeutic effects of hydroxychloroquine?

In fairness, we do not know. Yet we hazard the number is substantial.

Do This, No Do That

Donald Trump, along with millions of Americans, became the victim of the ruling class’s mutually supportive use of the COVID-19 pandemic to seize power over the American people, pretending to serve but jointly overriding the health of Americans in multiple ways. Whoever would lead republican Americans post-Trump must be committed to turning the tables — putting this corrupt complex’s leaders in prison.

And does the mainstream media retain one tattered rag of credibility?

The Trump presidency revealed the media’s monomaniacal hatred for the man, a hatred that burned with the heat of 5,000 suns.

All standards of objective journalism went emptying into the hellbox.

Meantime, social media excommunicated Trump and legions of his enthusiasts — often for harmless and inoffensive blabberings.

Examples run and run. Add them one with the other… and the American people are now on our guard.

We sniff a rodent.

To Gain Respect, Americans Must Disrespect the Deep State

To regain our respect, argues Codevilla, Americans must disrespect the institutions that disrespect us:

Discrediting and negating [them] is essential to freeing republican Americans from the oligarchy’s grip. This most important post-Trump task begins with disrespecting the oligarchy’s every part. That means denying their claim to be exercising legitimate republican functions.

Truth is, the FBI, CIA, and Justice Department act as agents of an oligarchic regime at war with our Republic and with republican Americans. To respect them is to disrespect ourselves… To disrespect them all is to respect the truth…

Even if their expertise in everything from education to the military had turned out to be genuine, it would not negate the inalienable interest that the rest of us have in living our lives as we see fit — in our own freedom, in pursuing our own interests according to our own lights. That is why the next generation of leaders must transcend Trump by debunking, defunding, and disempowering the establishment in education, medicine and public health, law enforcement, national security, on down the line.

And so we lift our hymn in praise of Mr. Donald John Trump.

He pulled back the curtain on the “deep state”… and forced them to expose their mischiefs in full public view.

In the process… he may ultimately enable Americans to reclaim the authority that is justly ours.

Would a worthier man ever adorn Rushmore?