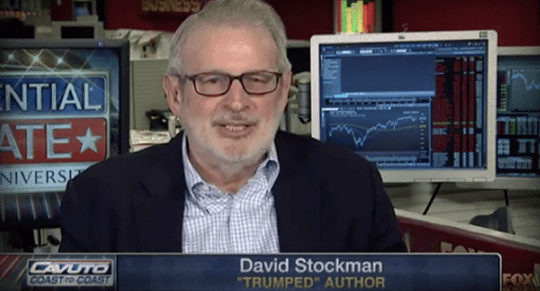 Trumped! A Nation on the Brink of a Ruin and How to Bring it Back

“The bipartisan ruling elite of the United States are indeed getting Trumped.”

Such is the professional judgment of David Stockman. Once upon a time in America, David was a crackerjack young congressman on a mission, all vim and vigor, all spit and vinegar, all fire and brimstone. 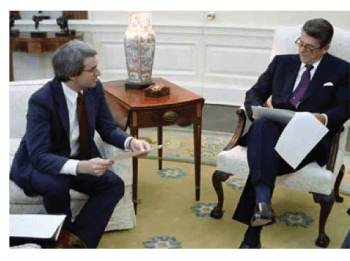 Four years he spent dynamiting the granite D.C. establishment that was taxing and spending the nation to death.

Then in 1980, Ronald Reagan handpicked David to be the White House budget director (see picture of them in the Oval Office).

There, barricaded in his Alamo, David tried to hold the fort against the big-spending warhawks and fiscal wrecking balls in his own party.

By 1985, he was out of ammo. Unbowed, his dignity in one piece, David went home to nurse his wounds.

In short: David knows the enemy, snout to tail. And he’s about 180 pounds of scar tissue as a result.

Now David’s taken to the warpath once again with a brand-new humdinger of a book, Trumped! A Nation on Brink of Ruin… and How to Bring It Back.

It’s a thundering, kill-’em-all-and-let-God-sort-’em-out, Sherman-through-Georgia rampage against Washington’s ruling elite. And authored by a modern-day Thomas Paine, or a 2016 Martin Luther nailing his 95 Theses to the church door.

In Trumped!, David rains down his fire on the Establishment’s lies, broken promises and Benedict Arnold routine that’s ruining the country.

[Stockman] shows that the Fed’s destructive ZIRP and QE policies have buried Flyover America in debt while clobbering it with shrinking real wages and vanishing job opportunities. At the same time, the bicoastal elites have prospered mightily from the massive inflation of financial assets in the Wall Street casino and the debt-fueled expansion of Imperial Washington’s domestic rackets and global interventions.

It’s all led to the rise of Trump at home… Brexit abroad… and basket case economies the world over:

Stockman argues that Donald Trump’s improbable candidacy happened because Flyover America has had enough of a rigged system that benefits the few but has failed to deliver economic recovery and real prosperity at home and a safer and more stable world abroad.

Nor is the Trump phenomenon some nine-day wonder gone tomorrow, says David. No, it’s for real: “Donald Trump’s wildly improbable capture of the GOP nomination and rise toward the White House is surely the most significant upheaval in American politics since Ronald Reagan… The rise of Trump — and Bernie Sanders, too — vastly transcends ordinary politics.”

Now, it’s true, David has his reservations about Trump. Even the man’s most loyal puppy dogs do. Trump’s crass. He’s vulgar. He’s got the instincts of a machine gun. And David thinks Trump overdoes the immigration and China-bashing schtick.

But David says Trump’s “directionally correct.” Trump agrees with David that the real enemies are the Washington and Wall Street elites and their rackets:

“That much, at least, Donald Trump has right. Throwing out the careerists, pettifoggers, hypocrites, ideologues, racketeers, power seekers and snobs who have brought about the current ruin is at least a step in the right direction.”

The book spans the entire canvas in 26 brilliant chapters. Here’s a peek: What the rise of Donald Trump tells you about what’s REALLY going on in America today, and what that means for not just your investments, but your and your family’s personal safety (Page 3)…

Mathematical proof that the S&P 500 is set to fall by 40% soon — if you understand this, there are some simple ways to protect yourself and even make some nice, safe profits (Page 238)…

The coming U.S. revolt that Brexit foreshadows. This is must-read material BEFORE you walk into the voting booth (Page 282)…

“I could not put the book down. It’s the book I wish I had written if only I had time. If you want to know where we have been, why people are really angry and what we should do about it, then do yourself a favor, set aside whatever political beliefs you have and read Trumped! A Nation on the Brink of Ruin… and How to Bring It Back.”

No faint praise, that. We heartily recommend it ourself. Whatever your politics, agree or not… it’s time to get Trumped!.