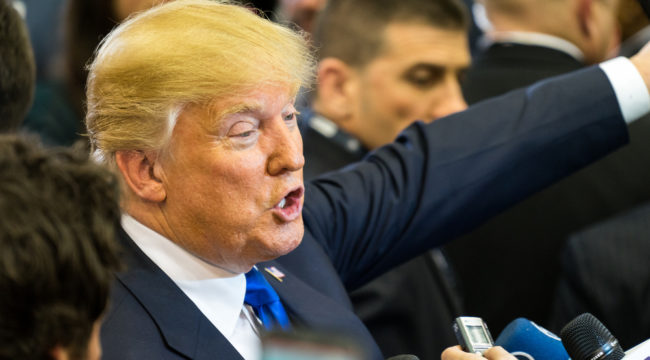 Trump vs. the World

Markets are still coming to grips with the reality of the trade war after many months of complacency.

The first trade war since the 1930s has escalated and may continue for years to come.

Trump may not be done with tariffs. In the days and weeks ahead, we can expect further mentions of tariffs on all Chinese goods entering the U.S.

If Trump does go ahead with further tariffs, you can expect China to retaliate again, as it did in response to the latest U.S. tariffs.

Initially, the stock market decided the trade war fears were overblown. Inside the Beltway, conventional wisdom said that Trump would reach a deal with China, that all of his tough talk was just a negotiating ploy.

It wasn’t. Agree or disagree with Trump, he means what he says about tariffs and trade.

Trump has never wavered in his belief that China and other countries are taking advantage of the U.S.’ low tariffs to export to the U.S., hurt U.S. industry and steal U.S. jobs and intellectual property.

The only reason he didn’t act sooner was because he wanted China to help him reel in North Korea’s nuclear program. But those efforts largely failed, and Trump took off the gloves.

This month the conventional wisdom proved wrong — again — and the stock market has now been forced to shift its view. Just look at the market reaction since Trump began tweeting that a deal was unlikely earlier this month.

Monday’s losses were particularly heavy after China announced retaliatory tariffs shortly before the market opened (do you think the timing was a coincidence?).

Yesterday the market recovered some of Monday’s heavy losses. But I don’t place much stock in yesterday’s market rally. There are fundamental differences in the U.S. and Chinese positions that cannot easily be negotiated away.

There’s a big difference between confronting China today versus confronting, say, Japan in the 1980s. Remember when everything was made in Japan and the Japanese were buying up American icons like the Empire State Building and Rockefeller Center?

But today, China has much more leverage than Japan ever had. China is also in a much more adversarial posture toward the U.S. than Japan was. The U.S. basically defends Japan and maintains several military bases on Japanese territory. Despite some local frictions, Japan welcomes the U.S. presence as a counter to Chinese ambitions in the region.

These realties mean that China will not acquiesce but will retaliate for any actions taken by the U.S. It has already proven that. Next time, the Chinese may choose to retaliate not only with further tariffs of their own, but also with other forms of financial warfare. China could also become more aggressive confronting the U.S. in and around the South China Sea.

With regional tensions already high, the risks of an incident between U.S. and Chinese forces could increase even further.

One of my major theses is that in times of too much debt and too little growth, countries resort first to currency wars and then to trade wars and then finally to shooting wars to steal growth from trading partners and geopolitical rivals.

The problem with currency wars is that all advantage is temporary and is quickly erased by retaliation. Not only is the world not better off, but it is worse off because of the costs and uncertainty resulting from the currency manipulations. Eventually, the world wakes up to this reality and moves to the trade war stage. Then to the shooting war stage.

This new trade war will get ugly fast and the world economy, which is already slowing, will be collateral damage. Given the trillions in dollar-denominated debt in emerging markets, a full-scale foreign sovereign debt crisis could be in the making if emerging-market countries cannot earn dollars from exports to pay their debts.

Markets still are not fully prepared for this, but you can be. Now is a good time to increase your cash allocation to reduce volatility and increase your exposure to gold as a safe haven.

Let’s pray the shooting wars are not hot on the heels of this coming trade war.

Below, I show you why tariffs are “as American as apple pie,” and the flaws in free trade ideology. Read on.