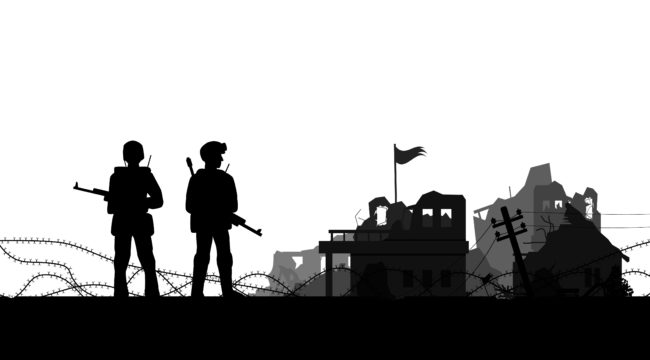 All three major stock indexes were deep in the red yesterday, and volatility spiked for the first time in months as the war clouds gather over the Korean Peninsula.

Here’s another from two days ago, equally as subtle:

Stocks bounced back this morning after yesterday’s swoon, but that’s what we’ve all come to expect at this point. “Buying the dip” has been a successful strategy — until it isn’t.

Markets still have not come to terms with the very real potential of a shooting war with North Korea over its nuclear program.

President Trump, Secretary of State Tillerson and Defense Secretary Mattis have all made it clear that a nuclear-armed North Korea with ICBMs that can hit the United States will not be allowed.

If North Korea persists, this means war with the U.S. There’s only one problem: North Korea thinks we’re bluffing.

North Korea believes that the U.S. is bluffing based in part on the prior failures of the U.S. to back up “red line” declarations in Syria over its alleged use of chemical weapons. Their belief is also based on the horrendous damage that would be inflicted on South Korea.

A major Chinese think tank analyst with government connections named Liu Ming says, “The military option the Americans are threatening won’t likely happen because the stakes will be too high. It’s a pretext and an excuse to pile up pressure on China. It’s more like blackmail than a realistic option.”

This is how wars begin: not because anyone wants a war, but because two sides misread each other’s intentions and stumble into one.

Make no mistake — Trump is not bluffing. He’s deadly serious about ending the threat from North Korea. And he has support within the national security community.

Defense Secretary James Mattis added Wednesday that North Korea “should cease any consideration of actions that will lead to the end of the regime and destruction of its people.”

Four-star Gen. Terrence J. O’Shaughnessy, commander of all air forces in the Pacific, said the U.S. would use “rapid, lethal and overwhelming force” against North Korea if necessary.

This comes as North Korea has threatened to attack the American territory of Guam, which is home to several key U.S. naval and air installations.

Meanwhile, U.S. ambassador to the United Nations Nikki Haley said, “The time for talk is over. The danger the North Korean regime poses… is now clear to all.”

You can’t get much more explicit than that.

The American people and citizens around the world are being told in no uncertain terms that a war with North Korea is coming unless North Korea ends its nuclear program. Yet North Korea will not end its weapons program. They consider these weapons indispensable to the survival of the regime.

This war is coming in mid-2018, if not sooner. Markets have not priced in this outcome. When markets do adjust to the reality of war, it could result in one of the worst market meltdowns of all time.

Don’t wait until next year when everyone else will see this clearly. The time to prepare is now.

You can make your portfolio shockproof by reducing stock exposures and increasing allocations to cash, gold, silver, museum-quality collectibles and land.