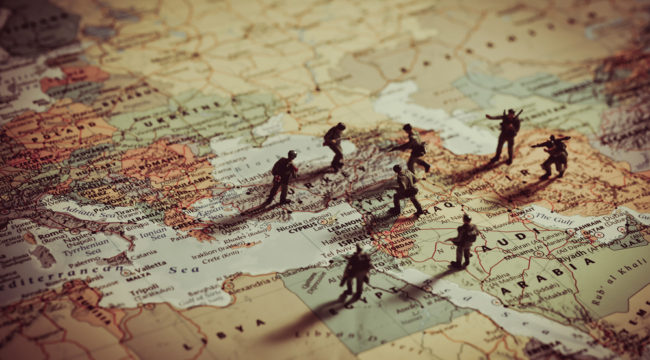 The Logic of War

This was the week that the logic of war collided with the illogic of bubbles. So far, the bubble is winning, but that’s about to change.

The “logic of war” is an English translation of a French phrase, la logique de la guerre, which refers to the dynamic of how wars begin despite the fact that the war itself will be horrendous, counterproductive, and possibly end in complete defeat.

As applied to North Korea, the U.S. has made it clear that if it is forced into a preemptive attack to destroy North Korea’s nuclear weapons and missile programs, it will not stop there. The U.S. will aim to decapitate the regime and replace it with something more reasonable.

This could be the start of a gradual reunification of the Korean peninsula on terms favorable to the U.S. In effect, we would be winners in the original Korean War fought from 1950 to 1953.

North Korea has made it equally clear that any attack by the U.S. will result in massive artillery and missile bombardment of South Korea, and possibly Japan and U.S. bases in the region.

Even if North Korea has not yet produced nuclear armed missiles, it does have enormous conventional firepower and missiles. It could possibly detonate a nuclear “device” even if it does not yet have a miniaturized nuclear warhead.

The bottom line is that the U.S. and its allies will suffer enormous casualties and economic damage, China may find a pro-U.S. regime on its doorstep, and the North Korean regime will face annihilation.

Given these outcomes, “logic” says that war should be prevented. This would not be difficult to do. If North Korea verifiably stopped its weapons testing and engaged in some dialogue, the U.S. would meet the regime more than halfway with sanctions relief and some expanded trade and investment opportunities.

The problem is that the logic of war proceeds differently than the logic of optimization. It relies on imperfect assessments of the intentions and capabilities of an adversary in an existential situation that offers little time to react.

North Korea believes that the U.S. is bluffing based in part on the prior failures of the U.S. to back up “red line” declarations in Syria, and based on the horrendous damage that would be inflicted upon America’s key ally, South Korea.

But, the U.S. is not bluffing. Trump is not Obama, he does not use rhetoric for show, he means what he says. Trump’s cabinet officials, generals and admirals also mean what they say. No flag officer wants to lose an American city like Los Angeles on his or her watch. They won’t take even a small chance of letting that happen.

The Trump administration will end the North Korean threat now before the stakes are raised to the nuclear level.

Meanwhile, the stock market continues its run of new highs. There was a pullback over the course of Wednesday and Thursday, and volatility spiked. But nothing significant relative to the recent record run.

The stock market, which is deep into bubble territory, shows no sign yet of repricing based on a horrendous war that’s coming soon.

And of course stocks bounced back today after yesterday’s swoon, as they have typically done during this bull run.

But like I said earlier, “buying the dip” has been a winning strategy — until it isn’t.

Stocks are being driven higher by double-digit year-over-year gains in revenues and earnings and by the percentage of companies beating expectations. But, the expectations game is just that — a game.

Companies lower expectations and then routinely “beat” them to give a pop to the stock. Year-over-year comparisons are good, but that’s only because 2016 was a notably weak year for stocks.

What’s really driving stock prices are expectations of higher earnings year after year. This is the stuff of bubbles. These Wall Street extrapolations assume no war, no recession, no unexpected shocks, and no continued central bank tightening. All four of those assumptions may be wrong. It only takes one of these events to disrupt the rosy scenarios Wall Street analysts are peddling.

I hope I’m wrong, and there’s always a chance that peace may prevail. But all the current warnings and indications point to war.

You may not be able to control the logic of war or the illogic of bubbles, but you can control your own portfolios.

This may be the last opportunity to reduce stocks positions, increase cash allocations, buy gold (not more than 10% of your investible assets), and consider other hard assets such as land, museum quality collectibles, silver, and natural resources.

A few strategically placed bets in the form of select put options are another way to enhance returns while avoiding the deluge to come.