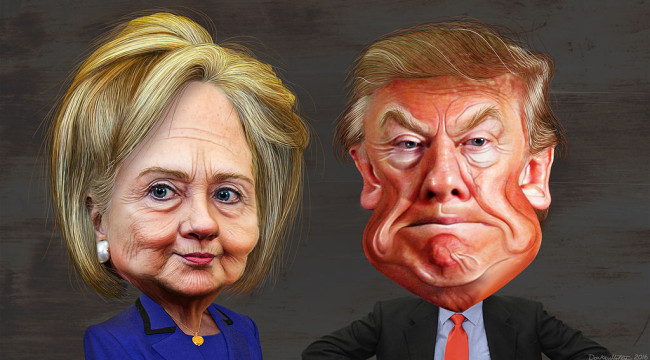 Trump, Hillary and the American Autumn

Trump has won the Republican nomination. What’s most surprising to many pundits and analysts is that Trump has done this without presenting all of the detail plans, voluminous position papers, etc. that we’ve come to expect over the last couple of decades. He has simply refused to play by those rules, and he’s not paid a price for it.

Trump has been able to pull this off because he’s not running a political campaign. Instead, he’s running an insurgency.

Not only that, it’s a very specific type of insurgency. It’s a type of insurgency so effective, it held the U.S. at bay in Iraq for years, drove oil prices to $147 a barrel in 2007, and toppled governments in Egypt, Tunisia, Syria, and Libya. I’m talking about an open source insurgency.

This means he is playing by very different rules than his competitors. Let me walk you through an example of what I mean by that…

Candidates typically take positions on a range of issues. These issues serve as a means of attracting a coalition of voters energized by these issues.  An open source insurgency works differently.  It forms around a single idea. In Trump’s insurgency, the central idea is seen in a tweet he made on the 29th of February: 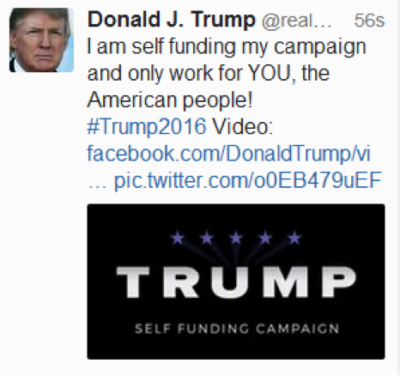 It’s a simple promise. It says: I’ll Represent You and Your Needs as President.

That’s it. It might not seem revolutionary. But in a country where big money owns the political system, the middle class is being shredded, and politicians are afraid of offending anyone, this is a big deal.

With this promise in hand, Trump executed on the second important step in open source insurgency.  He demonstrated that this promise was plausible. He won again and again in the primaries, growing with each win. This explains why:

Regardless of what you think about this, his insurgency has proven effective… note turnout earlier this year in South Carolina, for example. 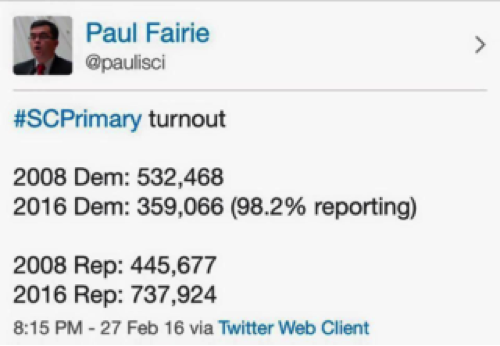 This suggests that Trump’s insurgency also has the capacity to take the White House this fall. That might have sounded wild and remote not long ago. But not anymore. Serious people are now giving Trump a legitimate shot.

This election isn’t a normal election. It is also a good demonstration of something the great scholar of warfare, Martin van Creveld said: if you fight barbarians long enough, you become a barbarian too. Look at what’s happening:

Trump has secured a whopping 7 points (47 to 40) lead over Clinton in a recent national poll by the LA Times/USC — despite the fact that nearly everyone in the media, academic, government, and political establishment is working against him.

This loss of control has infuriated the establishment, leading to increasing levels of paranoia, hyperbole, and anger (particularly in the media).  In short, the establishment is starting to act increasingly like Trump does — exaggerating and amplifying everything.

We are in a wild and out of control year. And anything can happen. Things just got more interesting now that a treasure trove of e-mail and voicemail messages from the Democratic National Committee has been leaked. Here’s what happened.

Here’s something that I didn’t think possible until this week. The Trumpified establishment might have found an avenue for disqualifying Trump as President: Trump’s rhetorical suggestion that Russian hackers should find Hillary’s deleted e-mails.

This has led many people in the establishment to contend that Trump committed ‘treason and is now a clear and present danger to the security of the U.S.’  This national security angle — the overt interference by Russia in U.S. governance — could make it possible to block Trump as a candidate on national security grounds.

But the potential threat of Russian hacking (voting machines, etc.) has even greater implications than that. Tensions between the divisions in the country are increasing rapidly. And any overt attempt to rig (through disruption or hacking) the outcome of the election could result in widespread violence and/or a national fracture.

There’s also a way terrorists could use November’s election to trigger great unrest bordering on a civil war. How so? Here’s a simple scenario…

It’s November 8th and the choice is between Trump and Hillary. Both candidates have negatives approaching 70%. The campaign has been vicious. Like a rematch of Hitler vs. Stalin in U.S. politics.

For months, there has been violent protest in every U.S. state. Protesters vs police vs. each other. Voters are edgy when they head to the booths on November 8th. Everyone is ready to put this campaign behind them. However, things are about to change for the worse…

Early in the afternoon (EST) a small group of global guerrillas spring an N-1 trap (N-1 is a last moment action or betrayal) on the U.S.:

One candidate declares victory. The other cries foul. Protests go national. Violence, looting and active engagement with police soon follow. Calls for calm ignored. Martial law is declared in different areas. The Internet is turned off in problematic areas.

Violence grows. The global economy collapses due to uncertainty over U.S. economy (ill-conceived financial derivatives ensure that virulent U.S. contagion spreads to every nook and cranny of the global financial and economic system). The U.S., suddenly impoverished, extremely angry, and mortally betrayed stumbles into civil war.

The most interesting thing about this scenario is that it can be pulled off with only five people.

This isn’t a prediction, by the way. But it’s a possibility. And given everything else that’s gone on this year, would it really surprise you?