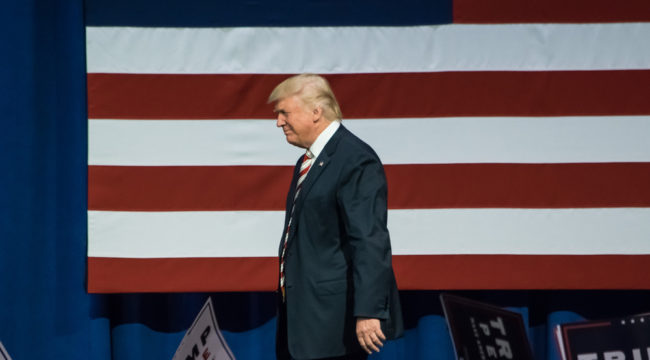 Black crepes across Wall Street yesterday. A day of mourning.

That’s the first time in 110 trading days that both indexes lost 1% or more — an all-time record, if you can believe it.

The upstaged Nasdaq took a licking of its own yesterday — off 107.

So… is the Trump reflation trade deflating at last? And what was it exactly that frightened the horses yesterday?

Today we take the bit in our teeth and press onward… with lofty step… in pursuit of answers.

But first a check on the reeling markets…

The Dow’s down again today… but only six points. The S&P’s actually in the green today — up four whole points. The Nasdaq shook off yesterday’s rout with a 27-point rally.

So what happened yesterday?

It seems markets finally got wind that the Trump tax cuts might not arrive on schedule.

Wall Street fell sharply on Tuesday as investors worried that President Donald Trump will struggle to deliver promised tax cuts that propelled the market to record highs in recent months, with nervousness deepening ahead of a key health care vote.

The market is starting to get a little fed up with the lack of progress in health care because everything else is being put on the back burner.

People are losing confidence in a swift moving set of congressional reform.

How much confidence remains — and how much patience — is somewhat dim.

But as we reported over a week ago, Trump can’t get his tax plan through until Congress addresses health care. Trump:

Statutorily and for budget purposes… we have to do health care before we do the tax cut. The tax cut is going to be major… but I can’t do it until we do health care.

And it seems less likely that House Speaker Paul Ryan’s plan to “repeal and replace” Obamacare will clear the hurdles.

Sen. Rand Paul (R-Kentucky) is hot for full repeal, no wish-wash, no “Obamacare 2.0” — his term for the Ryan Plan.

Paul said yesterday that Ryan just doesn’t have the votes. That means health care goes back to Jump Street:

I think there’s easily 35 no votes right now, so unless something happens in the next 24 hours, I would predict they pull the bill and start over.

The big vote is set for tomorrow.

Assuming no House Democrats vote yea — a bet next door to death and taxes — just 21 Republican nays kill the bill.

Remember, Sen. Paul says 35 are against — unless something changes PDQ.

That something could come from Trump…

In typical Trumpian fashion, he warned the assembled thus:

Many of you came in on the pledge to repeal and replace Obamacare. I honestly think many of you will lose your seats in 2018 if you don’t get this done.

Subtle as a sledgehammer.

That Trump sure knows how to work a room!

He returned today to twist some more arms.

So Trump’s staring down his first major defeat — by his own party no less.

Unless they can stow their axes, civil war within Republican ranks seems likely… and endless stalemate.

I have no doubt that Obamacare “repeal and replace” is turning into exactly the fiscal and political calamity I have been predicting. I think the battle ahead will shatter the frail GOP majorities on Capitol Hill.

Will the robo-traders and their human counterparts buy the dip this time?

And returning to the $64,000 question… is the Trump reflation trade deflating at last?

The irrefutable answer, after thumping our brain with endless numbers and hours of research:

We’ll get back to you on that one.