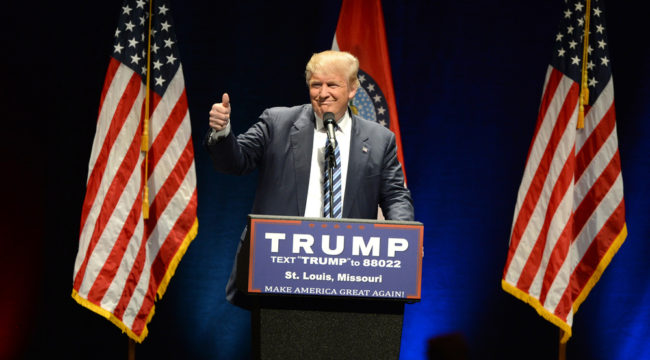 Trump and the Coming of Helicopter Money

One of the great mysteries of the past eight years is why there has not been more consumer price inflation despite the fact that the Federal Reserve has printed over $3 trillion in new money.

Many economists hypothesizes that such money printing must prove inflationary, and many consumers assumed the same. The answer is that money printing by itself is not inflationary — it has to be combined with velocity (that’s the turnover, or rapid use, of money) in order to produce inflation.

Most of the money printed by the Fed was simply deposited with the Fed by the big banks in the form of excess reserves. That money was never borrowed or spent. Therefore, it never had the kind of velocity needed to produce price increases.

Another answer is that inflation occurred not in consumer prices but in asset and commodity prices. Bubbles in stocks, real estate and some commodities over the past eight years are a kind of “inflation” all by themselves.

Yet we may have reached a turning point where consumer price inflation is kicking in.

This is dangerous because it feeds on itself. Once inflation starts, individuals expect more. They start to change their behavior by borrowing and accelerating purchases. As expectations switch from deflation to inflation, it is difficult to switch them back again.

We are not yet at the stage of 1970s-style runaway inflation, but some early warnings are in the air. This is a trend I’ll be watching carefully.

We may soon be entering a new period of fiscal domination by the Treasury. The Fed could subordinate its policy independence to fiscal stimulus coordinated by the White House and the Treasury.

Mainstream economists have traditionally been the greatest champions of independence for the Federal Reserve Board. The view was that if politicians were in charge, there would be continual pressure for lower interest rates and higher inflation.

It was deemed necessary to ensure Fed independence so that the governors (mostly Ph.D. economists themselves) could take hard decisions and raise rates if necessary. But now Harvard Professor Larry Summers, a former U.S. secretary of the Treasury, is calling for less independence for the Fed.

He would like the Fed to work more closely with the Congress and White House to implement “helicopter money.” Helicopter money results when governments run larger deficits and central banks print the money to cover the deficits.

Central banks have been printing money since 2008. The problem is banks won’t lend it and people won’t spend it. Helicopter money cuts out the middleman. Governments just borrow and spend the money directly without waiting for the banking system to do the job. Central banks pick up the tab.

This is all in contrast with the Fed’s stated policies of trying to raise interest rates by 3% over the next three years so they have some dry powder for the next recession. Summers is unlikely to be alone in his approach; he’s probably a stalking horse for others in the economics profession.

Look at what the elites themselves are telling us:

The technical case for monetary finance is indisputable. It is the one policy that will always stimulate nominal demand, even when other policies — such as debt-financed fiscal deficits or negative interest rates — are ineffective… A small amount will produce a potentially useful stimulus to either output or the price level.

Even if the Summers plan is not adopted, its mere existence is designed to push the Fed toward a more accommodative policy.

For everyday investors, these trends boil down to one thing — higher inflation, sooner rather than later. It’s time to diversity into hard assets, if you have not already, before the Summers plan becomes reality.

As always, timing is critical. It’s important to stay focused and be nimble.

Many of the short-run trends are the exact opposite of the long-run forces. Stocks may perform well in the short run as central banks maintain their easy money stance. Once inflation takes off, that tends to be a disastrous environment for stocks because inflation hurts capital formation and new investment.

Cash is another good short-term asset because it fights deflation, reduces volatility, and gives you optionality to pivot into other asset classes when the timing of the elite plan becomes more clear. Yet cash will be a bad long-term choice because it suffers the most in inflation. In extreme cases, cash can become worthless.

Bonds are just a more volatile form of cash, with a higher yield. Again, bonds are a good short-term play (because of deflation fears) and a bad long-term bet (because inflation is just a matter of time).

Some of the best opportunities will be in private equity and technology startups. These have to be carefully selected because the failure rate in startups is high. But good ideas can prosper in any environment.

We’ve seen how Google, Amazon and Apple came through the tech crash of 2000 and the financial crisis of 2008, just fine. Finding these companies is easier said than done, but they’re out there.

Gold is the ultimate all-weather play. Gold does well in inflation and in deflation (because government itself will bid up the price).

The problem with gold is that it just may not be available when you want it the most. This could be due to simple supply and demand, or governments may try to regulate sales or buy the floating supply for their own reserve positions.

The time to get your physical gold is now.

Exit polls uncovered substantial numbers of Americans who voted for Obama and then for Trump.

What will they do if Trump also turns out to be a disappointment?

He might end up filling his administration with establishment hacks who’ll serve their own agenda, not his. And you need to understand what Trump is up against now that he’s in office.

Even though Trump won the historic election, David Stockman is so concerned about the challenges Donald Trump still faces that he’s sending his new book FREE to any American who’s concerned about America’s future.